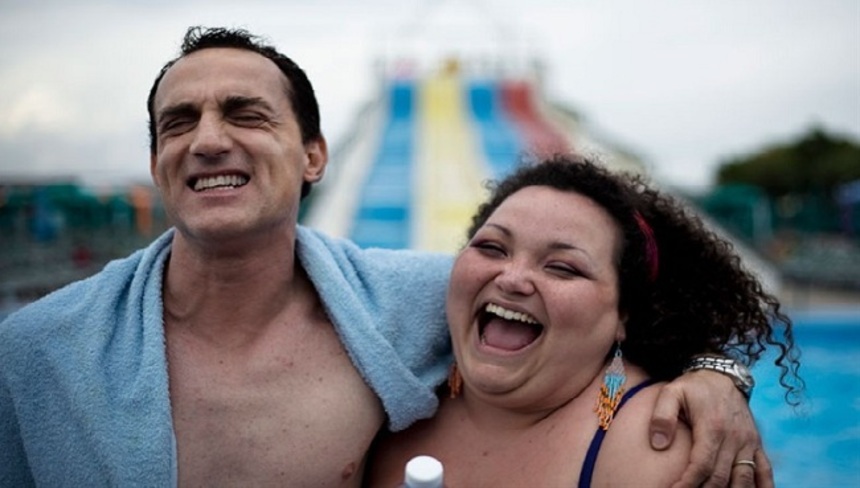 In his 2008 Cannes Grand Prix winning Gomorrah, Matteo Garrone took us deep into a crime ridden community to give an initmate taste of modern Italian society. In his follow up four years on, Garrone again plays tour guide to the Italian psyche, this time with the reality TV obsessed middle class in his crosshairs. By putting a greater focus on character, Garrone has crafted an even more engaging and every bit as facinating journey into Italian culture.

Garrone opens his film during an oppulent wedding with guests in high fashion, drinking free flowing champagne in all their wealthy glory. In a genius stroke of storytelling, we soon realize these obvious celebrities are nothing of the sort, their extravaggant surroundings merely rented for the day of celebration. The family that we folllow as the story continues is, in fact, squarly middle class. Its patriarch Luciano (Aniello Arena) owns a seafood stall at the local market and runs a side business with his wife Maria (Loredana Simioli) selling gray market pasta robots.

Luciano is a bit of a celebrity in his neighborhood and certainly within his tighlty knit family. His sisters' fawning and mother's undying encouragement, coupled with the pleas of his daughters, compel Luciano to seek national celebrity on Italy's version of reality TV sensation, Big Brother. When the audition goes well, the echo chamber of Luciano's neighbors and family propel a cycle of expectations that puts Luciano into a position where anything less than television stardom would be a catastrophe.

Garrone does a fantastic job of foreshadowing Luciano's propensity for obsession from the character's first moments on screen. This is a man who thrives off the adoration of others. But instead of staying in Luciano's head throughout, Garrone shares focus with other characters, most notably Luciano's wife Maria. As Luciano begins to lose himself in his own confident smile, we remain grounded because of her. In Gomorrah, Garrone told his story through multiple characters, without bringing us all the way inside any. Here we see his filmmaking evolved to a level that allows that same exterior perspective, yet with character depth that greatly personalizes the experience.

Smart decisions prevail throughout Reality and many small moments prove to be brilliantly meaningful upon reflection. Garrone's clever juxtaposition shines as one of the film's most impressive qualities, right down to the question of just what is represented by the title. There are enough "ah-ha" moments here to impress any student of film. But in the end, it's the rich and fascinating world created by Garrone through his characters that make this such a rewarding experience.