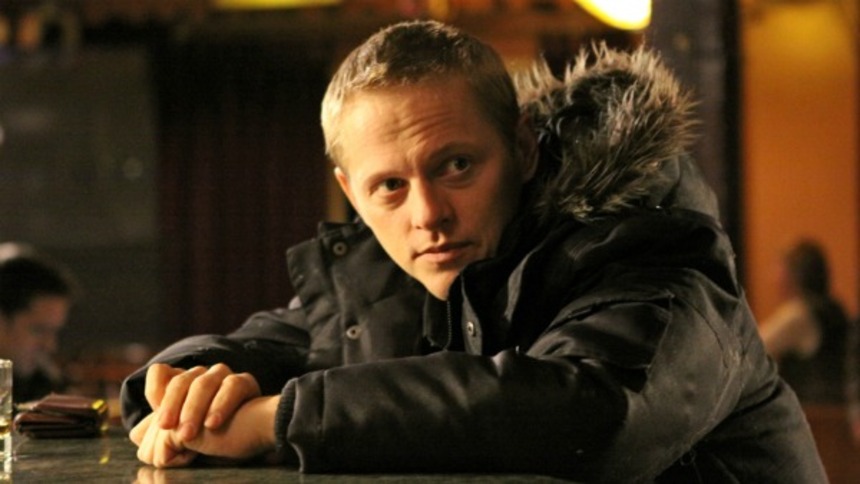 With a title that screams "campy fun ahead," Eddie -The Sleepwalking Cannibal both telegraphs its pleasures and sells them short. Yes, this Danish-Canadian co-production is pure fun from its first moment to its last (and beyond: stay for the credits), but it's not relying solely on winking, tongue-in-cheekiness. Not even close. Combining a winning fish-out-of-water tale ("Denmark, where's that? Europe?") with, believe it or not, elements of a classic screwball comedy, director Boris Rodriguez does a terrific job of entertaining us even without all the ghoulishly well-done horror. So when that stuff hits the screen, yeah, the movie officially enters overload territory.

The screwball component comes from the basic plot contrivance. Renowned but apparently burnt-out painter Lars Olafssen (Thure Lindhardt) joins the faculty of a Canadian art school. There's one catch, though: for the institution to stay afloat financially he must become a kind of big brother guardian for the title character (Dylan Smith). Traumatized at an early age and now no longer able to speak, he's allowed to hang out on campus since he's the nephew of a wealthy benefactor.

So a quick question for you: would I be spoiling anything by revealing that Eddie is a somnambulist... who also happens to munch on people?

But rather than simply leveraging this premise to indulge in some random blood-letting and facile black comedy, the screenplay by Jonathan Rannells and Rodriguez goes a lot deeper (although not heavier, somehow). The web of interdependence--the school, and by implication the wider community, relies on Eddie, and thus Lars as well--creates a series of moral, if humorously presented, conundrums. Can Lars really control Eddie? If he can't, then what--should he tell someone? What about his potential love interest, played appealingly by Pontypool's Georgina Reilly? Should he confide in her, or just revel in how two somewhat marginalized outsiders get repositioned as "heroes."

I'm trying not to give away too much here, especially as regards Lars' creative rebirth, but let's just say that as a film about art, alienation, and madness, Eddie is not so much Color Me Blood Red as it is John Brahm's unforgettable Hangover Square. I'd even suggest that it has a quiet grandeur that sneaks up on you. That's because Eddie starts to represent a psychological extension of Lars--they function as a single entity in a lot of ways--and so Eddie's monstrousness becomes directly tied to Lars' increasingly visionary states of mind.

In this respect one of things that the film does so well is play to star Lindhardt's strengths. There's a darkness to him just below the surface, one that's hard to pick up on since he's so likable. For much of the time he plays the straight man and, as I've always felt, proves that the straight man is the role that really makes comedy work--his reactions to the oddballs around him is superb. Yet he's funny, too, taking lines like "I think he ate a rabbit in the forest last night" and delivering them with a brand of deadpan elegance that seems to work every time.

The rest of the cast is equally strong. In supporting roles Paul Braunstein, Alain Goulem, Peter Michael Dillon are all hilarious. To cap things, Stephen McHattie--whose appearance along with Reilly's makes Eddie a kind of Pontypool reunion--spouts several scene-stealing one-liners in his role as Lars' agent. All of which makes me think that Eddie has "future cult film" written all over it. Because what is a cult film, really? Isn't it a film that you want to revisit repeatedly because you just want to spend time with its characters again, even if you know what happens to them?

I could go on--the wonderful score by David Burns, the brisk pacing, and so on. I'm sure if I really try there's something negative I could find to say about Eddie - The Sleepwalking Cannibal. But I guess I'll just have to watch it again to find out what that is.

"Eddie The Sleepwalking Cannibal" screens on April 20, 21, and 28 at the Tribeca Film Festival. For more information, to order tickets, or to view the trailer, check out the fest's Film Guide.

More about Eddie The Sleepwalking Cannibal