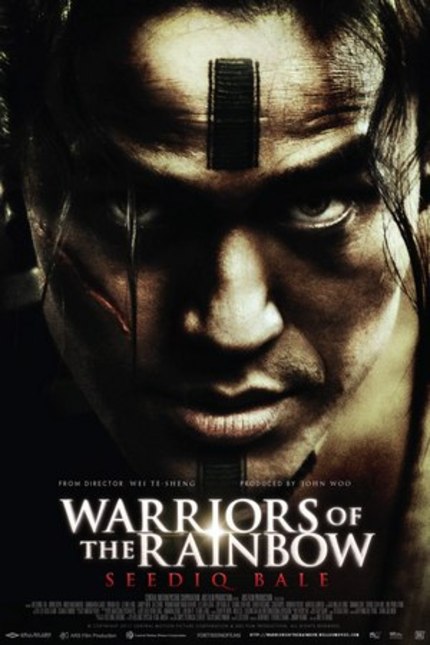 For thousands of years historians have filled millions of pages with the stories of brave warriors defending their homelands against insurmountable odds, and for as long as there have been narrative films, these stories have been told and retold to varying effect. Wei Te-sheng's Warriors of the Rainbow is the latest in a long line of such films. The battle between indigenous tribes and the march of either imperialism or modernity is a frequently visited subject. Taiwan's indigenous peoples suffered such an incursion in the first half of the twentieth century as a part of Japan's rabid march across Asia in an attempt to unite the entire continent under the rising sun flag, however, they would not go quietly into that good night.

The story focuses on the warring tribes in the Mehebu forest in central Taiwan, and in particular the tribe led by a legendary warrior known as Mouna Rudo. Chief Mouna is a survivor of the initial battles with the imperial Japanese army, and in 1930, he led a rebellion against the hostile Japanese police state that united many tribes in the region, and severely damaged Japan's capacity to contain his people. This shouldn't been seen as a spoiler, it is all historical fact. While it would be tempting to sell Warriors of the Rainbow as an action film, or even a piece of propaganda, it would be selling this film short, as it is far more than that.

Chinese filmmakers are no strangers to propaganda films, but this Taiwanese film is a far different beast. Whereas Chinese films often take the form of jingoistic xenophobia like the recent self-congratulatory works celebrating the anniversaries of the communist revolution, this film takes a long and fascinating look into Taiwanese history, and celebrates its indigenous heritage, which seems to be something that China is allergic to doing. Warriors of the Rainbow also takes on a historically easy target in the imperialist Japanese, however, it doesn't make caricatures of them in the same way that films like Legend of the Fist or the Ip Man films do. If anything, I would compare Warriors of the Rainbow to the 2009 masterpiece City of Life and Death as far as its depiction of the villainous Japanese, though this film takes a somewhat different tact.

Where Warriors of the Rainbow succeeds is where its Chinese counterparts so often fail, and that is in creating an emotionally engaging story that flows naturally into violence and action, rather than a flat story that uses plot points only as excuses to get into the action. The thematic use of ethnic pride and the characters subtle and realistic self-doubt and inner conflict all come through heroically in the face of a story that could very easily have fallen into melodrama.

Mouna Rudo is a stoic and very contained character, though he is not without bite. His rage, though contained, seethes through his incredibly expressive eyes and no-nonsense demeanor. Lin Ching-Tai, who played Chief Mouna, was not a professional actor, but his performance in the film is magnetic. His charisma is undeniable, and when he talks, you listen, which makes it all the more believable that he is this character who carries so much weight in the film. His young tribesmen, who all belong to the generation after his, also seethe with rage against that Japanese, though their emotion is not tempered with the wisdom of age like the Chief's, and this, too, feels very honest and real.

Though it is the story that will keep you riveted, let it not be said that Warriors of the Rainbow is boring. The film features a number of very exciting action set pieces, both between tribes and with the Japanese. The cinematography in the jungle locations, especially during these action sequences, is superb, and truly shows the beauty of this land that the Mehebu forest tribes people are fighting for, and links you to their struggle to hold on to their ancestral homes. My only quibble, and it is minor, is that the CG in the in the film isn't quite up to par with what we're used to in big budget American films, but the story is so involving, and the action so intense, that these moments and fleeting and not worth getting bothered by.

Warriors of the Rainbow: Seediq Bale is the shortest two and a half hour film I've ever seen. I cannot imagine a moment being cut or a frame out of place to make this film the wonderful work of art that it has become. I know that there is a longer cut for Taiwanese audiences, (actually, it was released in two parts) but the director assured us in the audience that the international cut is his film, and I commend him for creating such a brilliant piece of emotionally effective cinema. This is a film that deserves our support. As members of the ScreenAnarchy community, I highly recommend seeking out Warriors of the Rainbow in theaters to support this amazing film.

Find Warriors of the Rainbow: Seediq Bale in a theater near you