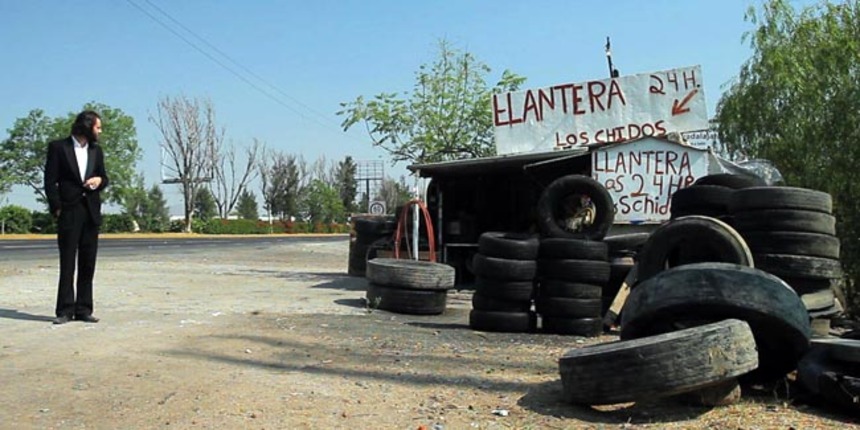 Set in a modern day Mexican metropolis (it was filmed in Guadalajara), LOS CHIDOS is a fable that revolves around a family who run a roadside tire repair shop. The term run, however, should be applied pretty loosely, as the Gonzales family spends more time gorging themselves on tacos and watching TV than repairing tires, telling most customers to come back mañana. While service may not be their forté, these folks do excel at the art of drinking; their watering hole providing refuge at the end of each long day, usually leading to debaucherous nights indulging their sexual urges, perhaps even with each other. 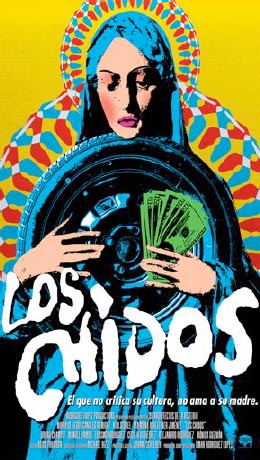 The excitement really begins when a handsome foreign man arrives at the tire stand in need of a repair. Dressed in his Sunday best and barely speaking a word of Spanish, the man waves around American money like the Gonzaleses have never seen. The Gonzaleses are immediately interested the opportunity to get a taste of both the stranger's sex appeal and his cash. Naturally his car can't be fixed until mañana, giving them the night to drink, fawn over, and incessantly berate the stranger for his poor language skills. One night turns into three or four as the man finds his place among the family and falls hard for one of the neighborhood girls.

What sounds like a generally straight forward plot is anything but. LOS CHIDOS is an absurdist satire packed with enough allegory and iconography to supply a semester's worth of graduate level study. When she's not busy trying to suck the gay out of her nephew, pious old Mom is knocking boots with the murderous butcher. Pops is head over heels for his daughter, and not afraid to act on it. Oh, and that neighborhood girl? She is actually in love with a cross-dressing, genital mutilating fecal freak.

This movie is most certainly not for everyone. It's probably not for many at all. But when viewed through manically satirical shades, it is truly a fascinating commentary on gender roles in religion and society -- or as Rodrigues Lopez alluded to in his introduction, how fucked up the male psyche is.

From a stylistic point of view, the film is a real gem. The claustrophobic sets explode with color and the costume design is excellent. Unfortunately, the sound design is not such a big hit. 100 percent of the sound was recorded in post-production. The intention to give the film a 1940s/1950s feel mostly succeeds, but the technique is so heavy handed that its cringe inducing nature pulls the audience too far out of the film at times. Rodriguez Lopez did report he would like to remix the sound if he finds the time. If a remix could serve to reduce this jarring effect, that time would be well worth finding.

There is no doubt that certain scenes in LOS CHIDOS are pretty tough to stomach. Any theater-goer should be ready to see just about every taboo displayed on screen with no punches pulled. But if you are prepared for the extreme, and perhaps have a flask of tequila in your pocket, your journey into the mind of Omar Rodriguez Lopez will very likely be a thoroughly enjoyable one. Just don't forget your thinking cap.

Do you feel this content is inappropriate or infringes upon your rights? Click here to report it, or see our DMCA policy.
Omar Rodriguez-LopezMaría de Jesús Canales RamírezKim StodelMaimuna Achleitner JiménezBruno ChampizComedyRomance