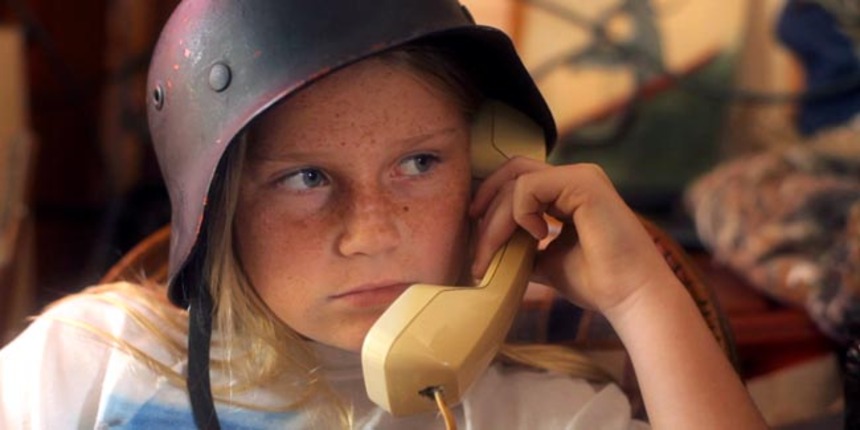 Kid-Thing is not, by any means, a terrible movie. The latest effort from brothers David and Nathan Zellner is the tale of a young girl caught in less than ideal circumstances, and at its core, the idea is somewhat novel and interesting. To be perfectly frank, however, Kid-Thing is a film that is unlikely to see much attention outside of the film festival circuit, as it relies far too heavily on heavy-handed whimsy, childhood nostalgia, and the odd chuckle to carry its rather non-eventful plot along.

Annie (Sydney Aguirre) is a young girl who lives in a rural area with two men (her exact relationship to them is never made clear), who keep her semi-nourished and with a place to sleep, but do very little else in the way of parenting. Marvin (Nathan Zellner) isn't a bad guy, he's just an idiot, and may or may not be depressed (this is hinted, at but never fully explored). As such, Annie is left to fill her days with aimless wandering, shoplifting, and random acts of innocent, childhood destruction. One day, while playing in the woods, she hears an elderly woman calling for help from an abandoned well, and after a brief and hostile interrogation, chooses to leave the woman there. The rest of the film follows Annie as she...wanders around, shoplifts, and destroys things, every now and again returning to the well to ask more questions of the mysterious woman before running off once more.

Annie is a believable and even somewhat sympathetic character, but she remains static through the bulk of the story, only begrudgingly helping the trapped woman after we're treated to many long, meandering scenes completely unrelated to the central conflict. These moments reveal little to us about Annie's situation that we don't already know from the opening moments. The ending, ambiguous at best, forces us to wonder exactly what the Zellner brothers were trying to tell us about childhood, nature versus nurtures, and why we should care. Such a non-story could be forgiven were the film at least visually compelling, but shots of dull, uninteresting locations linger for excruciating amounts of time, filling out the running time with unnecessary dead air.

A former professor of mine once explained non-traditional narrative filmmaking as the difference between using your camera as paintbrush or a window. If the Zellner brothers set out to craft their film as a window into the world of a child with few friends and no loved ones, they have succeeded, but to what end? Annie's refusal to trust anyone or extend kindness is understandable within the context of her environment, but the observations made by Kid-Thing are dull and uninspiring. Perhaps that's the point the Zellner brothers are trying to make, and an argument could be made that the story's structure intentionally mirrors that of Annie's adolescence, but it doesn't make for particularly interesting filmmaking. The truth of the matter is, Kid-Thing might have made a decent short, but as it is, the dragging narrative and ho-hum visuals make for a rather tiresome feature.

Do you feel this content is inappropriate or infringes upon your rights? Click here to report it, or see our DMCA policy.
David ZellnerSydney AguirreNathan ZellnerDavid WingoZack CarlsonDrama