JEFF, WHO LIVES AT HOME Review 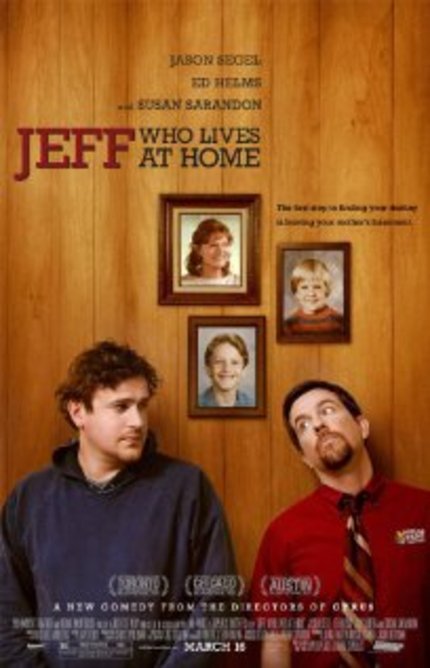 Jason Segel and Ed Helms experience a wild day of self-discovery and low budget indie cred in the Flying Duplass Brother's "Jeff, Who Lives at Home". Segel is Jeff, a thirty-year old softhearted stoner, content to an existence of forever slacking in his mom's basement. Helms plays Pat, Who Lives in an Apartment. Pat is Jeff's bother, but that's pretty much where their connections end. As condescendingly played by Helms (is Helms capable of playing a character any other way? He'd better prove it fast, before the comedic winds change on him), Pat is an arrogant loser who mistakes himself for King of the World. Unbeknownst to him, his marriage is in trouble, and his day is doomed. Or is it?
So anyway, these characters are morons, and this is their focally challenged moron story. At least, that's what the film appears to be about for most of it's running time. The first shot (a long one) is an intimate close-up of Jeff giving a passionate and halfway hippie-dippy analysis of M. Night Shyamalan's "Signs". He concludes that just as that film's seemingly wild threads pull together into a neat and tidy conclusion ("everything happens for a reason"), so too must real life. Exhale, momentary pause/ponderance. Then cut to a wide shot as Jeff lowers the voice recorder in exchange for some toilet paper. Yes, he's on the crapper. Such is the established pattern of "Jeff, Who Lives at Home" - a series of tonal set-ups that are quickly and intentionally undercut.

Jeff's mom (Susan Sarandon) tasks him with getting some wood glue from the hardware store to fix a busted shutter. She leaves cash for him on the table. Whether Jeff is capable of accomplishing this is highly debatable. Of course, he does get legitimately distracted... multiple times. Somehow, Jeff and Pat end up waylaid, covertly and ineptly pursuing Pat's wife (Judy Greer, great as always), who they discover is clearly attempting to have an affair. Meanwhile at the office, a secret admirer pursues their single mom via instant messages. Will all these threads converge neatly, or will it be just another day of over the top crash & burn monotony? The journey is funny enough to warrant sticking it out for the answer.

While I can't claim to be a fan of the previous decade's "mumblecore" movement (in which filmmakers eschew technical proclivity in favor of video aesthetic and dialogue-driven "realism"), the Duplass Brothers are proving an interesting case as they continue to subvert their chosen niche, bridging the gap between their filmmaking roots and modern-day Hollywood. Although "Jeff, Who Lives at Home" is by no means a large-scale film, when compared to the Duplass' previous films (which are mainly about people talking in apartments), this by comparison, with its car chases, big name actors and stunts, is practically "Lawrence of Arabia". Ultimately, the film is no great shakes one way or the other, but fans of dumb guy comedy will find things to like about it. Others may have a point in criticizing the movie for taking the easy way out, but honestly, this high-definition trip to the hardware store went better than I thought it might.

Jeff, Who Lives at Home