THE SECRET WORLD OF ARRIETTY Review 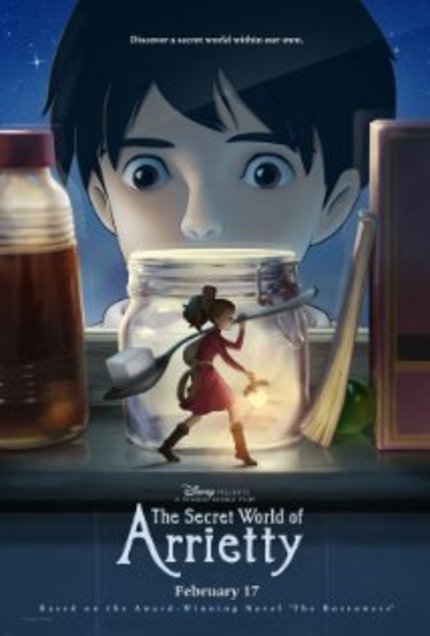 Arriving early in the year, Japan's "The Secret World of Arrietty" may go on to stand tall as one of the best films of the year. Graceful and elegant, unafraid to take its time but never boring, this adaptation of Mary Norton children's story "The Borrowers" - a tale of an ultra-tiny family that secretly lives in the walls of an ordinary home - is of quality on par with what we've come to expect from its home, the legendary Studio Ghibli. And although the lauded Hayao Miyazaki did not direct this animated film, he did write the screenplay, which is chock full of his familiar themes. The directing honor, this time, goes to Hiromasa Yonebayashi, who worked previously as an animator on many of Ghibli's great recent films, including "Spirited Away" and "Ponyo". Although this is his first feature directorial credit, the promise he shows with "Arrietty" couldn't be more solid. Yonebayashi and his team of animation storytellers have crafted a great movie about small people and full of big ideas.
As was the case with past Ghibli imports, Disney's John Lasseter has seen fit to lovingly translate the film to English language. This time out, the U.S. version was overseen by Gary Rydstrom - an instance where it makes perfectly logical sense for an ace sound designer to receive a directorial credit. (Rydstrom also directed the Toy Story short "Hawaiian Vacation", and the 2006 Pixar short "Lifted".) The U.S. version of "Arrietty" features the voice talents of Disney Channel star Bridgit Mendler as the young daughter and lead character Arrietty (she is also heard singing over the end credits), as well as Will Arnett, David Henrie, Amy Poehler, and Carol Burnett.

Miyazaki, perhaps the most globally celebrated Japanese filmmaker, second only to Akira Kurosawa, has maintained the delight and wonder of the notions inherent to "The Borrowers" while also dealing with ideas of how the self-centeredness of the contemporary adult world has dire consequences for their children, and how a family must work to survive. At one jaw-dropping point in the film, all mundane tranquility is shattered when a full-size human decides to tamper with the world of the little people. It is an epic disaster from the home-dwellers point of view, or more to the point, an act of a god. But what may seem earth shattering in the moment may actually be a blessing in disguise. Or not. "Arrietty" isn't afraid to play around with such larger ideas, as we come to find out the fragile true intentions of the meddler, and how temporary such blessings can be.

The main allure and take-away of "The Secret World of Arrietty", however, is the notion of the world and day-to-day life of the tiny people. As Arrietty joins her father for her first nighttime secret excursion into the dark world of the full-size kitchen, the film becomes a procedural of minutia, displaying in uncompressed detail the long trip from inside the walls to the vast countertop and the acres of tile floor below. One step at a time, Arriety and her world-weary father navigate a darkened pathway of not-fully-hammered nails, thread spools, and oversized everything. They only borrow items that they need and won't be missed, as their existence must never be revealed to the larger world. In this borrowed concept, we once again have a major Miyazaki theme about the raw and scary reality of the larger, often unseen world just beyond our own comfortable confines.

Arrietty inadvertently gets into as much trouble as she helps to solve, the biggest factor in both sides of this being her new relationship with Shawn, a kind-hearted full size boy who may be gravely ill. The idealism of cross-cultural, even forbidden friendship collides head-on with certain realities of the miniature world that have been long maintained, presumably for logical reasons. Unfortunate reasons, but nonetheless logical. Throughout it all, Arrietty and the characters of her world, both big and small, rise to the levels of fully formed humanity, even as they exist only in the 2D plane of traditional cell animation.

The Secret World of Arrietty

More about The Secret World of Arrietty