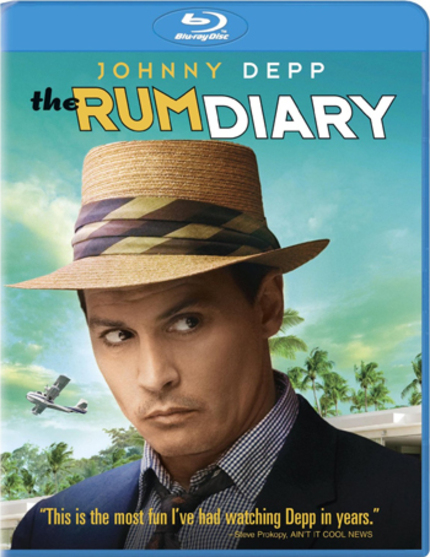 Writer-director Bruce Robinson's adaptation of The Rum Diary isn't a particularly good movie, but then I'm not really sure it had a whole lot of a chance. Based on an early novel by journalist/brilliant writer/crazy person Hunter S. Thompson, the Robinson's movie attempts to graft some of the author's later gonzo sensibilities (as well as the image that we all have of him post-Fear And Loathing) on a book which, in turn, is already at odds with itself given how much noodling Thompson did with it before and after his leap to fame. You can actually see that tension play out in Johnny Depp's performance as writer Paul Kemp, playing the role as half-naif, half Raoul Duke without being able to really find a way to bridge the two disjointed characters in this somewhat disjointed story of land grabs and corporate and political greed in 1960's Puerto Rico.

If I had to pin down the movie somehow, I'd say it's a "slobs vs. snobs" thing with the former represented by Kemp and the desperate, drunken collection of writers and freeloaders at the poorly-managed paper run by Lotterman (Richard Jenkins, actually kind of terrific here), while the snobs are embodied by slick operator and power broker Sanderson (Aaron Eckhart) whose venality extends to wanting to despoil the local beaches, push the locals off their land, and not have time for his pretty but vacant fiancee, Chenault (Amber Heard). The plot more or less concerns itself with a land deal and Sanderson's belief that he can use Kemp to help sell the deal to the locals through some journalistic sleight of hand, while at the same time showing the halfway state that Puerto Rico was in back then (and is to a certain degree now) as an American tourist destination that's somewhat part of the United States but whose poverty and corruption are kept at arm's length.

And that's the thing: there are some interesting ideas here and some genuine humor woven throughout, but it all gets grafted to a conventional structure to try to make sense of the whole thing. How then, do you explain the nonsensical almost-romance between Kemp and Chenault--there's literally nothing anyone like her would want from someone like him, no matter how bored she is. And the land deal is made to seem like a pretty big thing, but the details of it don't really emerge until about the 2/3rds point at which the movie starts winding down and the characters really don't have the time or ability to react to it in any way. And then there's the ridiculous post script at the end which kind of ties the whole story up in a faux-rebellious bow. We're supposed to be impressed/inspired by a block of text that really has nothing to do with the way the characters acted or their circumstances in the movie we just watched?

It's not all terrible. Giovanni Ribisi, doing drunken, madman journalist better than anyone else in the film, has a fine turn as the drug addled alcoholic Moberg. And again, Jenkins is terrific in his modestly-sized role as a newspaper man who once had virtues and now all he has is a paper. Michael Rispoli's Bob Sala is also an interesting piece in the mix, but feels too close to del Toro's role as Dr. Gonzo.

And that's really the movie altogether, isn't it? A couple of interesting bits and pieces, a few provocative ideas here and there, and some well-crafted performances in service to a story that wants to be something that it's really not. But again, I'm not certain the source material was really worth revisiting on film, and I suspect that any attempt to put Depp in the lead of any of Thompson's work would tend toward the same kind of complaints about how far off the mark it was where Fear and Loathing was so very much on target (as I've done here).

The Rum Diary comes to Blu-ray looking and sounding pretty much as good as any other moderate-to-major studio product, although director Bruce Robinson's shooting style tends to go for a washed-out look during daylight scenes, but I guess that's part of the effect. And I know I should just accept that home video releases are just going to have terrible cover art, but I'm not even sure where to begin here (all things considered, I prefer the Hangover-style poster used for the theatrical release).

In terms of features, the one thing that makes this disc essential is a decent-length (45 minutes, if I recall) doc about and with Hunter S. Thompson, "The Rum Diary Back-Story" that has the frequently pickled author talking about the road to creating the book and the many stops and starts in getting it made. It's not going to tell you a whole lot new about the man or his work, but it's damned interesting being in his (simulated) presence for a little while and sort of taking in the mood.

The Rum Diary is available on DVD, Blu-ray, and VOD now.

Do you feel this content is inappropriate or infringes upon your rights? Click here to report it, or see our DMCA policy.
Bruce RobinsonHunter S. ThompsonJohnny DeppAaron EckhartMichael RispoliAmber HeardComedyDrama

More about The Rum Diary