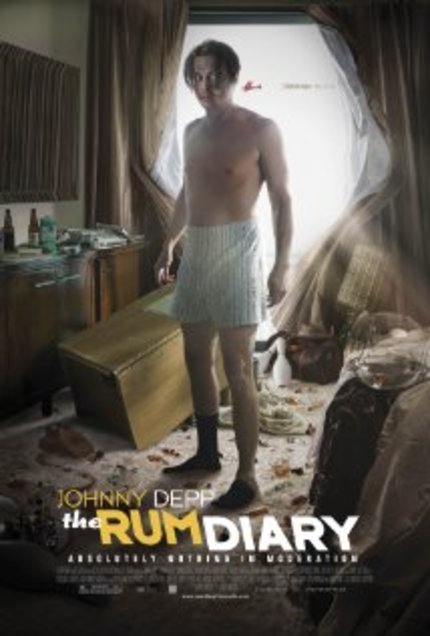 Patently odd and subtle British filmmaker Bruce Robinson ("Withnail & I") emerges from mothballs for "The Rum Diary", a charmless and tired adaptation of the first published novel by the infamous and renowned gonzo journalist Hunter S. Thompson. Thompson, who died in 2005, had a strange bond with actor Johnny Depp, who essentially played him to great effect in Terry Gilliam's 1998 adaptation of "Fear and Loathing in Las Vegas", a book which many consider to be the writer's definitive work, a drug-fueled counter-cultural touchstone. "The Rum Diary", perhaps not so much.
At the well-attended screening, there were the usual annoying gleeful clapping reactions to Depp's name in the opening titles (What a dreamboat!), quickly followed by stunned gasps when we get our first look at him in the film: strung out, hung-over, and sickly pale (Oh, my!). I don't know how long it will take these people to realize that Depp is clearly a matinee idol in spite of himself, and whatever un-aging movie star notion they have of him is sheer infatuation (particularly when he's set out to pay tribute to his friend Hunter Thompson). This is the face of a Johnny Depp passion project, bloodshot and bloody lipped.

The film never gets any better than those early moments, when Depp as aspiring writer called Paul Kemp, wakes up bleary eyed in a trashed hotel room in Puerto Rico, where he's come looking for a job at the doomed newspaper The San Juan Star. For all intents and purposes, this is a fictionalized origin story of Hunter S. Thompson, detailing his shift from being just another drunken journalist caught up in a building scam with a rich swindler (played by Aaron Eckhart) (whose omnipresent hot girlfriend, played by Amber Heard, amounts to a curvy distraction with a pulse) to a perpetually stoned and outraged nut job, always railing incoherently, compellingly, and every once in a great while, brilliantly, against the machine.  That he doesn't quite become that character in "The Rum Diary" is the true bummer of this film, although we do get Giovanni Ribisi as a sort of cautionary embodiment of the kind of odoriferous Hitler wastoid (think Keith Moon if he never were a drummer) Thompson may've fully become had he not left the island.

Alas, that bleary-eyed sensation you may be overcome with while watching "The Rum Diary" is not the contact high of classic Thompson vigor and delirium coming through. No, it's just plain old sleepiness. And while I did manage to stay awake for the two hour entirety of this meandering trip to nowhere, I'm just not all that compelled to relive it blow by blow right now. So in lieu of the usual plot synopsis and talent profiles, I present to you the recipe for "The Rum Diary":

Shake half-heartedly, and slowly consume. Or just read the book.

Do you feel this content is inappropriate or infringes upon your rights? Click here to report it, or see our DMCA policy.
Bruce RobinsonHunter S. ThompsonJohnny DeppAaron EckhartMichael RispoliAmber HeardComedyDrama

More about The Rum Diary