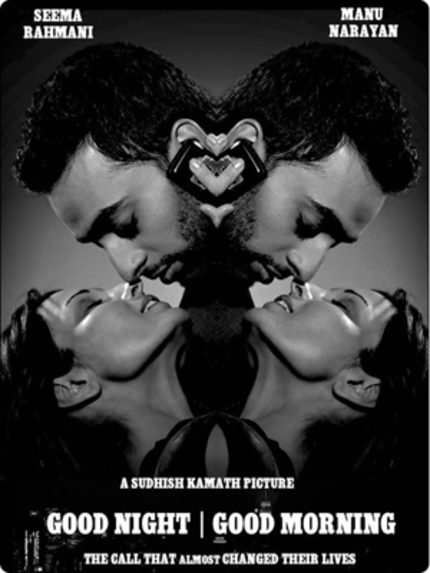 The well of films whose action takes place over the course of a single night runs deep. However, typically these stories, particularly the love stories, follow a couple on a wild fling through the congested streets of some lively city. Sudhish Kamath's Good Night | Good Morning eschews the easy route and takes the story in new, but real, directions. With a minimal cast, crew, and budget, Kamath spins this deeply affecting love story from bits of thread that add up to greater than the sum of their parts.

Good Night | Good Morning chronicles a series of late night phone calls between a lovelorn single man riding in a car with his buddies from New York City to Philly, and a lovely but lonely woman hours away from flying from NYC to Mumbai. They'd met only briefly earlier in the evening at a bar on New Year's Eve, and the man's friends encouraged him to call her to try out his game, but neither one of them got what they expected out of the call. The relationship, and it is that, even if it evolves in a matter of hours, grows and deepens through the course of the film in a realistic and mostly plausible way.
Turiya, the man in this story, is a hopeless romantic. We are reminded with nearly every word of his fragility and his relentless belief in love and eternity. The woman, whose name we find out much later in the film, considers herself to be more of a realist. A person who believes that relationships are for suckers, and that being happy in the moment is the best one can hope for. Their ideologies about love clash early and often, with each trying their hardest not to concede any ground. This battle of the sexes takes on increasingly personal subjects as the pair wrangle for some form of superiority over one another.
To some, the idea of a phone call from a near stranger taking on cosmic meaning in the lives of both parties may seem far fetched. However, it is that distance, the impartiality of the callers on both ends that allows the information and emotion to flow so freely. Whatever hangups the callers have, they have no baggage with each other, which opens the lines of communication in a way that just isn't possible with people you know well. They have no reason to lie, no reason to believe that they'll even know each other in 12 or 24 hours, and so no reason not to go for broke, and they do.  The result is among the most charming and creative Indian independent films I've seen recently.
The film's two leads carry their roles admirably, with little supporting cast on which to lean. Turiya, played by Manu Narayan, embodies his lovesick character's neurosis and blind faith well. He's able to tap into emotion when necessary without the distraction of visual or editorial trickery, which is impressive. Even more impressive is the performance of Seema Rahmani (Loins of Punjab Presents) as the girl, who's entire performance, save for about 3 minutes, takes place in an empty hotel room with no one to bounce off of. These two actors are required to hold our attention for 90 minutes with no help and manage the task admirably. There are times where the film feels a bit overly theatrical, and I wouldn't be surprised to learn that it was a stage play at one point, but in this context it works fine.

Technically, the film is quite an interesting one, if nothing else as a way to explore the possibilities of a low budget production. Good Night | Good Morning is shot about 90% in black and white, with a few brief color snippets representing either flashbacks or fantasy sequences. The lack of color for the main narrative sequences keeps the focus on the actors, where it belongs, and is an interesting and effective choice. Much of the film, rather than going with an action/reaction visual sense, is shot in split screen, which requires a great amount of technical savvy for the actors lines to match up, and it never feels forced, nor does it feel as though they miss a beat. Kamath's crew is up to the task, and the film is a wonderful example of the things possible with a good story on which to fall back.
I went into this film not expecting a whole lot, I'm not much on romantic comedies, but I came out with a decent warm fuzzy feeling. I could relate to these characters who bare their souls to complete strangers in a way that just isn't possible with even the closest friends. I found truth in their seemingly unlikely story, and I genuinely enjoyed this film. It may be a while before Good Night | Good Morning hits DVD in the US or anywhere else, but I suggest seeking it out through the link below if you're in the mood for something mellow, this just might hit the spot.

Good Night | Good Morning opened in India on Friday 1/20, and is available in the US via the MELA app for Roku, iPad, and MELA set top box. Click through here for more details.