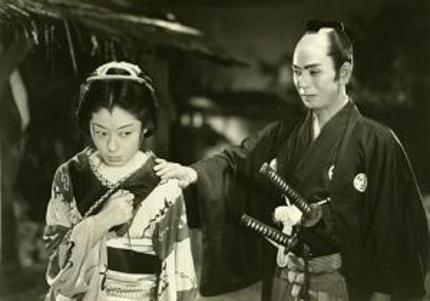 Sometimes it's fun to watch an older film and tease out an early example of such-and-such a visual or narrative trope, whether it's to get a sense of how far we've come or to admire how far a particular director was ahead of their time. The trouble with Kiyohiko Ushihara's Ghost Cat and the Mysterious Shamisen is it doesn't offer much beyond the chance to play amateur detective. It's an intriguing history lesson, reasonably well-made and with some standout moments of aesthetic or technical flair, but the cast don't make too much of an impression and even for an early horror film, made in a simpler era, it's neither that tense nor especially frightening.

Seijiro is a shamisen player, a fledgling professional lucky enough to have earned a regular spot performing with the ensemble at a local theatre and a mentor setting up his path to future greatness. He's also engaged to marry Mitsue (Sumiko Suzuki), a popular actress at the theatre, who considers her affections a gift any man spurns at their peril. When the pretty daughter of a samurai family rescues Seijiro's beloved cat, there's an obvious rapport between the two of them that Mitsue doesn't care for at all. But when she takes drastic steps to ensure this budding friendship goes no further and Seijiro stays hers forever, it seems something supernatural is determined to make the jealous fiancée pay for her crime.

You could get a serviceable horror out of this fairly easily - jilted lovers taking things too far were a staple of folktales across the world long before this point. But Ghost Cat is pitched almost entirely like a formula learnt by rote. Every stage of the plot develops in precisely the way you'd expect, with the actors trotting out their lines as if they're reading off flashcards - not bad as such, but devoid of any real inner life bar one or two scenes - here is your cat; goodness, aren't you nice; I hate her, but I hate that cat even more, and so on. Even the most dramatic over-emoting from the silent era generally proves more engaging than this, which makes it really hard to care about much of what happens.

Which is a shame, because the seeds of something special are definitely planted down there somewhere under all the print damage. Ushihara clearly knows his way around a camera, and even wheels out several early visual FX to try and help the scares along. The rigid formalism works much better from an aesthetic point of view, with some of the two-handers even coaxing a bit of passion from the cast - a conversation between Seijiro and the samurai's daughter is especially affecting as she begs him not to reject her, and the repeated shots graced by falling cherry blossom feel surprisingly memorable. And though the scares never really hit home, there's a stiffly poised elegance to many of them that's entertaining to watch.

And though it's nowhere near as accomplished as the mighty Kaidan, you can recognise the same matter-of-fact approach to the morality play in Ghost Cat as the homespun myths and legends that so fascinated Lafcadio Hearn. Ushihara displays little or no interest in hammering his audience over the head with the idea that bad people deserve to be punished. Mitsue was cruel and selfish, but there's never any real explicit link between what she did and the supernatural things that follow - not in the sense that one having happened means the other had to. There's no lesson here, just a calm acceptance that's the way life is sometimes, which no amount of period acting can completely sour.

Still, there's been better. Ghost Cat doesn't come close to bothering the great films of the era, or even the classic silents of ten, twenty years before. Something like the Swedish period piece Ser Arne's Treasure (1918) might be from an entirely different culture but despite its limited resources manages to be a far more shocking, compelling and moral ambiguous film than this. There were rules already in place; age doesn't excuse Ushihara's unwillingness to push the boundaries. Ghost Cat is a simple piece of populist entertainment at heart, and it shows, which is frustrating when you consider what the brief hints at the director's willingness to experiment suggest it could have been.

If you're curious, it's still a film worth checking out, should you have the opportunity. There are still moments that prove awkwardly enchanting, the cast are mannequins but beautifully composed mannequins, and they do occasionally morph into real people. It's a simplistic film, but it doesn't really have any pretensions to being anything more, and it can be fascinating to see the birth of a genre - or at least the stillborn remains of the industry's first attempt, before World War II clamped down on domestic film production in Japan. For completists, cineastes or anyone not yet tired of stories of strange things from Japan, consider Ghost Cat and the Mysterious Shamisen cautiously recommended.

(Ghost Cat and the Mysterious Shamisen screened at the 25th Leeds International Film Festival, which ran from 3rd-20th November 2011.)