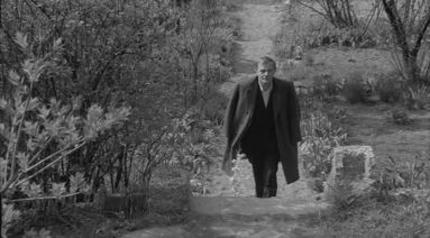 If you judge a film by how well it balances its ups and downs, Karoly Makk's brilliant Love is a master high wire act, a scintillating piece of drama that's warm and compassionate but realistic with it - yet that never descends into misery-porn. The story of a family broken up by state persecution in the repressive regime that governed Hungary in the 1970s, Love is a film about little white lies, those we tell ourselves as well as other people, and the cost of struggling onwards no matter how hard life gets.

It's undeniably theatrical, with big speeches that play out as if they were written for the stage, but the wit and intelligence behind the dialogue make the film a joy to sit through, to say nothing of the raw, wounded life the cast give their parts. Despite the film's age it's a visual feast, too - the director pushes the sensory overload a little too hard in places, but the dreamlike, graceful composition of the big set pieces feels almost timeless, and Love frequently feels as if it could have turned up any time in the past few years rather than four decades ago.

Luca (Mari Töröcsik) is struggling to survive after the secret police have carted off her husband Janos (Iván Darvas) for some unspecified political faux pas. Her mother-in-law is old and bed-ridden, and Luca is only too aware telling the old lady her son's been locked up for a ten year stretch would be more than she could bear. So Luca scrimps and saves to make sure the old lady gets cared for, and weaves a ludicrous fiction every time she visits in which Janos has emigrated to the US and found success beyond imagining as a film director.

Her mother-in-law would obviously rather believe this than speculate what might actually have happened - the lie serves as a comfort blanket along with memories of friends from long ago, or taking pleasure in the few luxuries she can still afford. But as the housekeeper observes,  Luca can't keep this up forever. It goes without saying something's going to dispel the illusion everything's okay: the question is what will catch up to Luca first.

Love starts out deceptively low-key; on the face of it you've got relatively unassuming cinematography and a quiet, easy rapport between Luca and her mother-in-law that could almost have been lifted from the better class of soap opera. But it's the little things that clue you in, the gently barbed humour when Luca chats with the housekeeper - anyone not up to speed on the period background would still catch the air of weary resignation and wry smiles at everything the two of them have to put up with.

And it slowly becomes apparent there's real pain here, not just at the strain of living a lie but the spectre of death, of loss in all its forms (a missing husband, a dying woman) and the fear that things might get worse. The three women assume their roles almost effortlessly, the kind of acting that's so natural, so confident that at times it's simply breathtaking.

Yet it needs restating this isn't an exercise in misery; though dry, Love is often sweetly funny. Much of the appeal of the film comes from the slow realisation of how many different levels it comprises and the amazingly subtle swings between them, from tenderness and optimism to grief and frustration, then back again. And it is gorgeous. As Luca juggles playing the good wife with constantly fretting about the future, or her mother-in-law dreams of the life Janos is supposed to be leading, Makk affects an extraordinary stream of flickering, ephemeral glimpses into their thoughts.

As the old lady reads her son's fictitious letter, for example, she pictures New York and the potentates coming to see his film as ancient sepia photographs or grainy newsreel footage - Makk jumps between images a little too quickly, maybe, but it's a stunningly well-realised aesthetic easily the equal of any director working today.

Even with Makk's eye for a comic moment Love could so easily have ended up wallowing in the characters' hardships for the sake of it, but the capper on its greatness is definitely how convincing it makes their ultimate redemption seem. Which isn't to say we get a happy ending as such; there are things left unsaid after the story's all wrapped up, problems that remain unsolved and wounds that can't be healed.

But Makk suggests that even after all that these people can still realistically have some small triumphs left to them, and that those triumphs are worth sharing because of how much the characters feel for each other. Love isn't all rainbows and kittens, and there are some things it can't put right, but it's still powerful enough to get you through the bad times. It's a simple, but moving conclusion that might come across a tiny bit preachy - the epilogue is very obviously a Big Moment - yet it never once feels unearned.

To some extent the temptation when praising classics from decades past is to dismiss them as being stuck there. Sometimes it's understandable - a lot of great films from the sixties and seventies are still very much of their time no matter how they were made. Love leaps past much of the competition in that it's not only brilliantly put together but viewed in retrospect little if any of it feels dated.

It's simply a great story, told so well it's mesmerising, with some of the most astonishingly convincing character development you will ever see; deeply, deeply moving yet not even slightly manipulative, even when it turns to the melodramatic. If an English-language remake were commissioned that conveyed the same value in a small victory hard-won, they'd be throwing Oscars at it. Love might seem simple enough on paper but in practice it's every bit as multi-faceted, as wonderfully profound, as the emotion - if you've ever cared for someone enough the thought of them kept you going, you need to see this film.