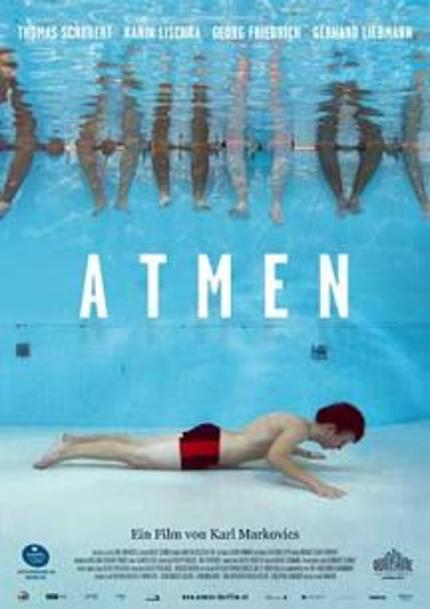 A young man desperately in need of a purpose ends up taking a job dealing with the recently deceased, collecting the dead and making them look the best they can for their final journey - in the course of which he learns responsibility and respect for the value of life, while those people in the young man's life who once rejected him come to respect his decision and the changes it's brought about. There, can we compare Karl Markovics's Breathing to Departures now? Obviously there are significant differences between the two films, but see the premise written down like that and it's the first thing you notice.

But this isn't a case of plagiarism or a lazy remake. Where Departures was weighed down by contrivance, unearned sentimentality and depressingly predictable plot beats Breathing is hard, gritty and markedly more realistic. It's still a warm and deeply human film that firmly believes people can be redeemed - though whether they'll get the chance is open to question - plus it's smart, witty and frequently very funny. Yet it hits very hard, too, refusing to sugar-coat its characters' flaws and forcing them to deal with some truly harrowing situations without ever resorting to cheap shots, gross-out scares or manufactured drama.

The lead, Roman (Thomas Schubert), is an angry, sullen young man, insular and aggressive, obviously looking for a way forward in life - Breathing opens as he's trying to land a job - but clearly reluctant to extend a hand or trust anyone who might want to help him. We quickly learn he's been locked up in a young offenders institute for some time (though it's not explicitly revealed what put him there until the final act). With a court hearing due very soon, Roman's adoptive father is clearly desperate for his son to demonstrate he's making some effort to turn his life around; badgering him to take a job, any job that'll prove to a judge he's not become institutionalised.

When Roman announces he wants to apply to an undertaker's, his father thinks he's joking - and yet slowly, surely, this position proves different to all the others. Breathing is definitely following a template, there's no denying that. Roman picks up life lessons one corpse at a time, rediscovering his humanity as he goes. He has to cope with the idea of death, with sudden death, with the idea people will still hate him, sometimes, even when he does the right thing. First his new co-workers hate him, then they like him. But all of this feels entirely organic, never shouts a single message too loud and often proves devastatingly emotive.

An early scene where Roman and the one older hand who's taken an instant dislike to him have to prepare an old lady who's keeled over and died in her nightgown is a thing of rough-hewn beauty, an absolutely masterful display. As Roman and the older man move through the apartment while their boss comforts the daughter standing distraught in the entrance hall, everything is so tightly locked down, dialogue, gestures, pacing, you can practically hear what all four actors are thinking. And Markovics then promptly tops this with an emergency callout straight afterwards spinning out the themes he's just introduced in the previous scene, which kicks Breathing up to another level altogether.

So much of the character development barely seems to be in the script, but more sidelong glances, facial expressions or fleeting callbacks to previous scenes that feel more fulfilling than any big popcorn crescendo. (Witness Roman grudgingly asking his partner for help with something totally mundane, and how that winds up.) The different aspects of the plot don't come together in Big Moments but quiet epiphanies that feel extraordinarily fulfilling. When Roman makes an impulsive decision that could get him in serious trouble then it turns out people are prepared to forgive and forget, it's as far from keening Hollywood strings as it gets, but markedly more powerful, even tear-jerking.

It's not quite perfect; some of Markovics's direction is oddly stilted, with weird blocking or composition that doesn't seem to serve any real purpose, and a couple of plot developments hinge on if not contrivances, then certainly jarring leaps of faith. But this is still riveting stuff - world-class drama with scene after scene at pitch-perfect emotional intensity and yet plenty of quiet time to think about what we've just sat through. Regardless of how much he borrowed, Markovics spins absolute gold from the narrative and his cast remain on top form throughout. Compelling and uplifting, yet never shy of letting us know life is hard - and that once we've made a mistake the consequences generally don't just magically disappear - Breathing comes hugely recommended.

(Breathing was screened at the 25th Leeds International Film Festival, which ran from 3rd-20th November 2011.)