Sitges 2011: THE SORCERER AND THE WHITE SNAKE Review 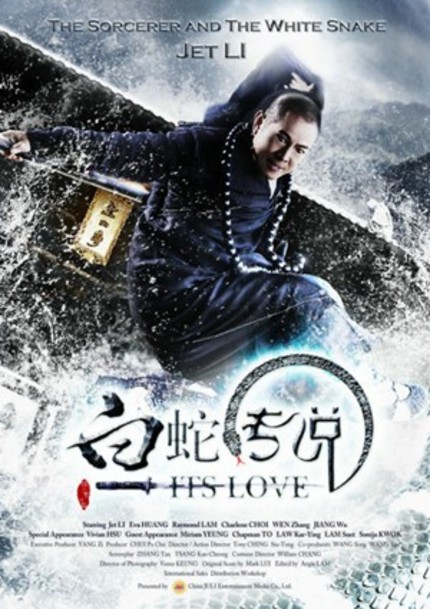 It's been a while since we last saw Tony Ching - or Ching Siu-tung, if you prefer - directing a movie. And being someone with such an impressive filmography, both as director and martial arts choreographer, it's easy to understand the expectations for his latest film, The Sorcerer And The White Snake. If you add the presence of Jet Li as the titular sorcerer you should have a pretty good idea of what to expect of the movie.

The story starts with the young herbalist Xu Xian (Raymond Lam) as he's making a trip to the mountains to gather some herbs. When he suddenly falls into a lake, the demon White Snake - taking the form of the beautiful woman - jumps in to rescue him, and they become instantly in love in the process. With the help of her sister Green Snake, she decides to venture into the human world to seek for her loved one and marry him. On the other hand we find Fa Hai, the sorcerer monk played by Jet Li, who's devoted to the mission of subduing demons and destroying monsters. Shortly after arriving in the town where the newly married couple lives, Fa Hai senses something strange about the woman and reveals her disguise, and forcing the couple to fight for their true love.

The film revolves around very straightforward and classic themes of forbidden relationship between people coming from different worlds, Romeo and Juliet style, just with a good dose of Chinese folklore and visual fireworks in the mix. In that sense, the first couple of scenes set the tone for what's to come. In the opening sequence, Jet Li and his apprentice get involved in a spectacular battle against a beautiful ice demon in a snowy landscape, and we can already notice both the film's best and worst. The battle sequences feature a generous amount of CGI, and while they are epic in scale they also make evident that some of the effects are just not good enough for this day and age. And what's worse in my opinion is the lack of physicality in the fights, depending mainly of the computer effects instead of the martial skills of the performers, though we can find some good choreography here and there. From a visual standpoint, the film is gorgeous to watch. The Sorcerer And The White Snake features a remarkable production design, with towns bursting with life and colors, impressive Buddhist temples and spectacular landscapes.

In the end, Tony Ching's latest effort comes across as an entertaining movie, but one that never reaches the expected heights considering all of its parts. If you're in the mood for some light-hearted fantasy about love and some visual spectacle in between, then this will be the right movie for you. If on the other hand you're looking for a good martial arts flick from one of its masters, you'd have to wait until the next one.

The Sorcerer and the White Snake

More about The Sorcerer and the White Snake