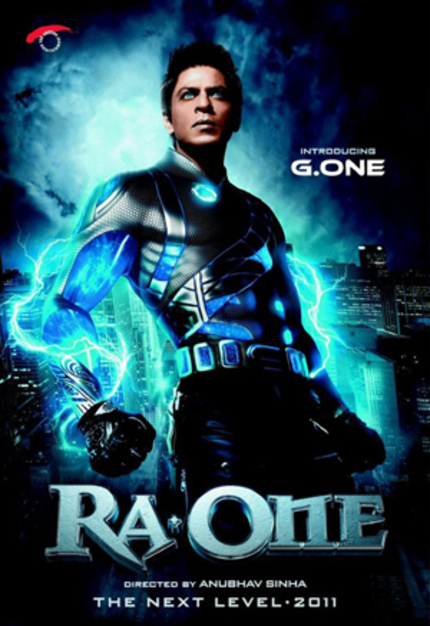 For almost a year ahead of tonight's official release of Shah Rukh Khan's sci-fi/superhero event film, Ra.One, the man himself has been working his fingers to the bone building up this night to be a game changer for Hindi cinema.  Ra.One is the most expensive Indian film to date, much of the budget put forward by SRK's own production house, Red Chillies.  The film was initially slated to release in early June, but massive post-production demands pushed the release back four months, well into October and the heart of the Diwali season, Indian film's equivalent of Memorial Day weekend. All of this hype started to feel a little bit overwhelming as scores of people like me began to wonder if perhaps Ra.One could ever live up to the massive expectations it had created.  I'm happy to say, though, that the film largely lives up to the hype and is a rousing and often breathtaking spectacle that not only marks a high water mark for Hindi film, but also for contemporary international action film.

At its core, Ra.One is a story about a father and his son.  The father, played by SRK in a ridiculous looking curly wig, is Shekhar Subramanium, a video game designer in London who is a lovable geek.  The son, Prateek, is played by newcomer Aman Verma. Prateek is a typical pre-teen who wants nothing to do with his geeky Dad, and he escapes by jumping into the world of online gaming under the handle Lucifer. Shekhar does everything he can to win Prateek's affection, but it isn't until he takes his son's suggestion of creating a game with an unbeatable villain, that Shekhar finally becomes cool in his son's eyes.  This being a sci-fi film, this unbeatable villain, named RA.One (short for Random Access Version One and a play on Ravaan, the demon lord of the Ramayana), breaks out of the mainframe and comes looking for the last person to defeat him online.  Who could that be? Why, it's Lucifer of course, and the chase is on.

The first half of the film faces occasional hiccups in the form of some overly broad acting from SRK's nerdy Tamilian, Shekhar.  However, this is all in the service of rendering Shekhar a sympathetic character, and is well within the bounds of typical Bollywood masala. SRK does overly broad well, his character of Suri in 2008's Rab Ne Bana Di Jodi was similar in many ways to Shekhar, and it was one of his more successful performances. However, for the uninitiated, Shekhar's bumbling may be a bit off-putting.  He is balanced well by an uncharacteristically good performance from Kareena Kapoor, of whom I'm usually not a huge fan. Kapoor plays Shekhar's wife, Sonia, and her performance contains all of the subtlety required to keep SRK from spinning out of control. They have good and palpable chemistry on screen, and Ra.One definitely benefits from that.

As the film nears it's intermission around 90 minutes in, the real fireworks begin.  A first half bombshell drops that lands the Subramanium family in a heap of trouble, and as Ra.One attempts to find and destroy 'Lucifer', G.One makes the leap into the real world to act as their protector. For the next 90 minutes or so, the action comes hot and heavy and it is quite impressive to say the least.  Right before the intermission, we get a little taste of what a Ra.One/G.One showdown would look like, and it made me a bit giddy. Cars fly all over the place and to call the action ambitious would be an understatement.

The temptation with a film like this is to call it a benchmark for Indian action cinema, which is certainly is, but the fact is that the film and its effects are effective regardless of their origins. Ra.One is a stunning action film, with stunts that would hold up with the best of any Hollywood action film.  They did things to the streets of London that would have never imagined I'd see in a Bollywood film, but here they are, and they look good!  There is major devastation in every corner of the frame, and the CG is light years ahead of anything to come out of India so far, and on par with anything I've seen anywhere, save Hollywood.

Last night in my review of 7aam Arivu, I lamented the inclusion of a romance in a film that didn't require one.  Tonight, with Ra.One, all of the emotion that the film delivers serves the story both in terms of plot development and theme, and it is very seldom gratuitous. Major action films with heart are few and far between, and Ra.One delivered beyond my expectations in that department. Apart from the explosions, superhero stunt work, and computer generated fireballs, there is feeling here, and characters that elicit sympathy.  Yes, it is goofy at times, but it never tipped over the line to ridiculousness for me.

Ra.One takes all of the tropes of Bollywood and meshes them into a modern story in a way that is engaging and propulsive.  There are several uptempo songs, and yes, even a couple of spontaneously choreographed dances, but they are well integrated into the narrative.  There is a particularly awful mangling of Stand By Me in the form of the song Dildaara, but even it manages to deliver an emotional punch potent enough to be forgivable. The film casually veers back and forth from comedy to action to sci-fi, but it does so in a way that is entertaining and never too jarring.  They even manage to squeeze in a cameo from Superstar Rajnikanth himself playing Chitti, the robot from Enthiran, following a south Indian styled brawl in an airport parking lot. You know what?  It worked!

There was a fear that writer/director Anubhav Sinha had bitten off more than he could chew with Ra.One.  Sinha is a director with a couple of minor successes and a couple of flops on his record, so taking on a project of this magnitude was a big risk for everyone involved. I'm happy to say that in my eyes, he's succeeded in a grand and captivating way. Ra.One contains just enough Bollywood that it may have newbies scratching their heads a few times, but for the brave ones who stick it out, I think there is a lot of fun that can be had with this film. I was starting to fear that the marketing would be a poison pill for this film, rendering the expectations unattainable. Is this film the best ever made? Certainly not.  What it is, though, is a supremely entertaining action adventure that should be able to cross language lines and find fans in any community.

More about RA. One