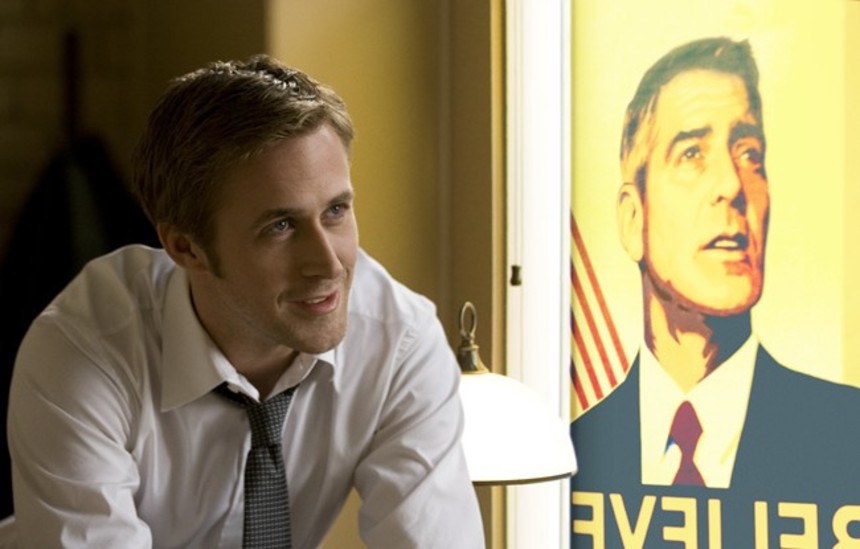 The Ides of March (George Clooney, 2011). It's perhaps obvious to expect a dark lining to the overcoats worn by men running for political office. It's perhaps even more obvious that political corruption has long been a favored form of mainstream entertainment. Since our votes no longer seem to matter, slapping down ten bucks provides some assurance that no amount of spin will negate what we all fundamentally know about the pants that stroll the corridors of power and their heedless zippers.

With an A-list cast that includes George Clooney (also directing), Ryan Gosling, Philip Seymour-Hoffman, Paul Giamatti, Marisa Tomei, Jeffrey Wright, and Evan Rachel Wood in efficient and top notch ensemble form, The Ides of March campaigns forward by the sheer volition of its undisputed talent even if it is essentially a sermon for the converted. Is it just me or are Philip and Paul playing the same roles over and over and over again? Marisa gleams with malice as a conniving journalist. I have to give a heartfelt shoutout to Evan Rachel Wood who has matured into one of our loveliest and most gifted actresses. She's come a long way from being a child in the ill-fated TV series American Gothic. Just you wait, she's going to do something in the future that will knock our socks off and earn her an Oscar. This, however, is not that role but ranks her as ready and able.
Sign-In to Vote
Tweet Post Submit

More about The Ides of March