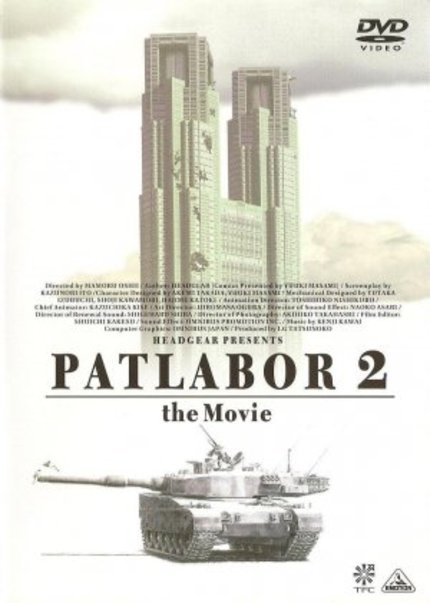 Patlabor 2 is the film that first defined Mamoru Oshii's trademark style. While most people came into contact with Oshii (Sky Crawlers, Tachiguishi Retsuden) through his first adaptation of the Ghost In The Shell manga, Patlabor 2 predates that film by two years and still holds all the key ingredients that made GitS into a world-wide success. And even today Patlabor 2 proudly stands its ground, having lost very little of its initial impact.

Oshii came a long way before he made this film. He started out working on series like Nils Holgersson and Madame Peppermint. In between he directed several feature films, each sporting their very own stylistic experiments, but none of them really connecting to form a encompassing whole. Patlabor 2 brought all these elements (philosophical meanderings, purely atmospheric cuts, politics, technical excellence and last but not least, dogs) together for the first time to create what could be considered a master template for all the high-profile films he would be making during the following ten years.

With his work on Urusei Yatsura Oshii already proved that he had few problems completely overturning the atmosphere of an existing series. Patlabor is a little different as Oshii had a big hand in the previous installments of the series, but it's plain to see that with Patlabor 2 Oshii was ready to break some new ground. While the original series and the first film still focused on the Patlabor squad as a whole, Patlabor 2 directs its full attention on chief Goto. The rest of the crew is still around, but only in minor, secondary roles.

That very shift in focus marks the first major break with the previous installments, as Goto has always been the most serious and pensive of the bunch. This character trait actually carries over to the film as a whole. It allows Oshii more time to dig into some political subtleties and to introduce a string of philosophical discussions and monologues. The story kicks off with a missile attack on one of the major Tokyo bridges. Goto is then approached be a government official to help capture the man behind the attack. He plays along, but feels there's more to it than the information that is fed to him.

From a technical point of view, Patlabor 2 still looks pretty impressive, even today. Characters designs are detailed, the animation is crisp and abundant and the mecha designs are still stellar. But one of the film's most distinct visual features is the character's remarkably pale skin tone, which is heavily contrasted by the use of dark, heavy shadows. It helps the characters to blend into the industrialized and mechanized, somewhat cold exterior of Tokyo as portrayed in this film. This atmosphere is further underlined by strong gray and blue overtones throughout the entire film.

Fans of Oshii will also notice the first appearances of some of his trademark shots. The inside view of a car traversing the highway by night, inside shots of a car when someone steps in or out, the reflections of scenes on buildings and their respective distortions, the distinct cut scenes that thrive on music and audio alone ...). It's clear that Oshii would repeat many of the visual tricks he tried to pull off in later films, but even these first attempts look damn impressive.

Another major asset of this film is the audio track. Patlabor 2 was definitely not the first collaboration between Oshii and Kenji Kawai, but it does feel like it was the first time they really found each other. Kawai composed some absolutely stunning music tracks which Oshii clearly realized upon receiving the score. Some scenes seem to be added with the sole purpose of doing justice to Kawai's music. The voice acting too is superb. Ryunosuke Obayashi is perfect in the role of Goto, sporting a soft, pleasant and soothing voice with just the tiniest hint of an audible smirk around the edges.

Oshii does very little to mask the philosophical undercurrent of this film. As Goto puts it quite well himself, Patlabor 2 is about the differences between a just war and an unjust peace and how these two are connected to each other. More on the surface level of the film we find a story about a one-man crusade, holding a complete country in his grasp with just a few well-planned tactical moves. Patlabor 2 is a game of political chess where Oshii demonstrates a very believable sketch of how one man can hold a nation hostage, called visionary by some (referencing 9/11). That's taking it a little too far if you ask me, but connections between the two can certainly be made.

But the most impressive scenes are those that are void of plot progression. The key scene of the film sees Goto floating around quiet industrial landscapes, reminiscing about war and peace, a monologue that is carried by the wonderful score of Kawai. A second scenes illustrates the occupation of Tokyo by the military, once again set to the soothing tones of Kawai's music. Clear front-runners of the landmark scenes in Ghost In The Shell (and Innocence), but already radiating Oshii's mesmerizing style.

For those of you who appreciate some juicy rumors and a good diss, ever since this film was released voices have been whispering that the character design of Tsuge (the main villain) resembles the honored mister Miyazaki. It's no secret that there exists a respectful feud between Oshii and Miyazaki. While I never really found conclusive evidence for this specific rumor, comparing the two does bring up some very interesting similarities. It doesn't really affect the film, but it's a fun little easter egg if you're interesting in that sort of thing.

While the ending of Patlabor 2 reaches back to its origins a little too abruptly, the rest of the film is A-grade Oshii material that should please fans of the man's work. It's an impressive tour de force, bringing a perfect mix of intriguing philosophy, a smart plot and stunning audiovisual stimuli. It's also the film where Oshii finally finds a personal style that would carry on through several future films and would begin to define him as a director. He never really succumbed to his signature style (keeping side projects like Mini-Pato or Tachiguishi), but it's obvious this film is a landmark in Oshii's oeuvre.
Tweet Post Submit