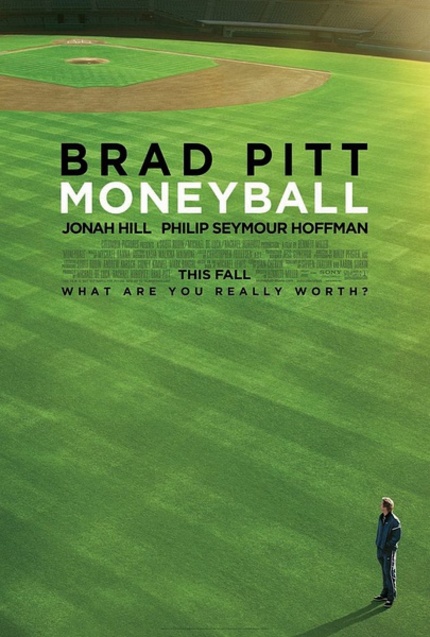 Years ago, an instructor of mine at film school told of a time in his past when he was so glad to be leaving the dismal small town he'd been living in for St. Louis - a big city where he could finally indulge his passion for film. "Little did I know", he said, "that I'd moved to the Sports Capitol of the Universe." And he was right. Whatever else we're known for in this city (Anheuser Busch? Toasted Ravioli? The Arch?), the truth of it is, this is Cardinal Country first and foremost. Downtown comes alive for one thing and one thing only: A ball game. When talking movies with an average joe around here, it helps if the movie is a baseball movie.

I have no beef with baseball movies, but also no inherent interest in them extending beyond simply hoping whichever ones I do see are good. And I think "Moneyball" is good, even if it doesn't quite measure up to its cinematic relatives. No, I'm not talking about "Pride of the Yankees", "The Natural" or "Bull Durham". For me, the older, smarter and better-looking older brother of "Moneyball" is "The Social Network". Both films are unlikely cinematic adaptations of abnormal business dealings that take place in the last ten years. Both share boast an Aaron Sorkin screenplay credit, and therefore both have snappy batter, an intuitive flurry of no-holds-barred information, and a shrewdly amusing you-are-there immediacy.

But "Moneyball" is no "Social Network". Sorkin shares the screenplay with Steven Zaillian, a skilled writer in his own right, who's earlier pass at the material fell into disarray at the hands of filmmaker Steven Soderbergh. As legend goes, Soderbergh was all ready to shoot a considerably more dry and factual version of "Moneyball" before the studio got cold feet about it, and euthanized the whole thing a measly week before filming was to start. But Brad Pitt, who was onboard to star in it, stayed on, and somehow resuscitated the project as a commercially viable inside-baseball drama with director Bennett Miller. Soderbergh, meanwhile, grew dejected and made "Contagion". I ponder "Contagion"'s relevance to "Moneyball" in my review of that film, so for now, I'll simply say that if "The Social Network" is the older brother, then "Contagion" is "Moneyball"'s dark and clever second cousin, once removed.

"Moneyball" is, from my own experience, one of the better baseball movies ever made. There are moments - few and far between throughout the inflated 133 minute running time, mind you - of pure baseball magic. (As a lifelong St. Louisian, this is in my blood, after all.) So I suppose that for my theater-mates - here in St. Louis, Missouri, the Sports Capital of the Universe - that makes it one of the best movies of all time. They were clapping and cheering out loud during the effective game playing scenes, as if to say, "Ah, baseball - now this we understand!"

Which is good for Brad Pitt, star, producer and savior of "Moneyball", who only a few months ago, was seen in a work that raked the ire of many a local theater patron at the hoity-toity mall-based art house Cineplex. I'm talking about Terrence Malick's "The Tree of Life", in which Pitt plays a conflicted father. Despite the fact that Pitt gave an Oscar-worthy performance, and despite the fact that "Tree" ranks among the Great Movies, the talk it generated in this town centered on it's ridiculously high walkout rate, a problem that prompted the theater manager to post a disclaimer sign.

Another night, at another local multiplex, I took note of the oddly sparse "Moneyball" one sheet. It was a baseball field of bright green grass punctuated with a tiny figure, lost in thought, in the lower corner, (Is that Pitt? A stand-in? An existential grounds keeper?) then Brad Pitt's name over the movie's title. Fascinating. Odd. An abnormally starless way to promote a star vehicle. The poster signaled that "Moneyball" would be another unconventional picture for the actor. Then I overheard a woman commenting on it in surprisingly exhausted disgust: "Is Brad Pitt TRYING to destroy his career?!?"

Indeed, she'd seized upon something that I also took note of: I couldn't clearly recall the last time Pitt actually took a conventional Hollywood leading man role. Was it "Troy"? I didn't know, but it wasn't really "Inglourious Basterds", and the "Ocean's" films don't count because he was part of an ensemble. I was coming to realize - and I never thought I'd be typing this - that Brad Pitt, purely in terms of the projects he chooses, has been shaping up to be one of the most interesting actors in Hollywood. But the upset poster lady didn't want that Brad Pitt. Clearly, she wanted Pitt to make Bard Pitt movies. But the thing is, I defy anyone to tell me just what that sort of "Brad Pitt movie" is.

Maybe "Moneyball" will help that challenge. The leading part in this film is the kind of material actors lust after. Pitt gets to dominate the screen as a savvy business-dude and athletic wheeler-dealer who is also a relatable everyman at heart. He has all the good lines, all the great conflict, and is incapable of being wrong. (Or is he?) This, in short, despite the semi-starless one-sheet, the very movie star role that Brad Pitt has been lacking. It is also, for those same reasons, transparent and basely uninteresting. But he carries the movie in such brash, lovable fashion that one can't help but enjoy the broad strokes of "Moneyball".

"Moneyball" does a strange thing, setting out to convince us that baseball, classically considered a game of heart, is more effectively won by eliminating the human factor. The film spends a lot of time crunching math problems and spouting statistics. The flurry of numbers is meant to be undeniable in validity, and ultimately revolutionary in implementation. The film is based on an autobiographical book by Oakland A's General Manager Billy Beane, who, following a painful near miss at a World Series championship, was forced to stock his chronically cash-strapped ball team with inexpensive unknowns, has-beens, rejects, and up-and-comers. The common denominator? Statistically speaking, they all get on base. Things that would typically bar such individuals from the Major League - carousing reputations, personality conflicts, aging - were completely overlooked in favor of the raw data. And that, according to "Moneyball", is the modern method that revolutionized professional sports for the past decade.

"Moneyball" the book is undeniably the story Billy Beane wants told, just as "Moneyball" the movie is the version of it that Brad Pitt wants to star in. His magnetic charm and charisma as Beane work overtime as the visionary character short-changes, insults, and steamrollers roomfuls of other lesser, well-meaning individuals. Perhaps the greatest victim of this, what might be the film's single biggest character assassination of a real-life person is Oakland A's manager Art Howe, depicted here as an obstinate stick-in-the-mud. The great Philip Seymour Hoffman plays Howe as an exhausted sourpuss, which is understandable considering the way Beane seems to delight in jerking him around. But Pitt's Redford-esque magnetism red dwarfs Hoffman's Eeyore-esque glumness, engulfing all else into a celebrity-induced void in the process.

Less engulfed in the void, if only for virtue of being Beane's primary yes-man, is Jonah Hill's nebbish young economist Peter Brand. Playing this socially awkward fish-out-of-water marks a very pronounced transition for Hill from vulgar teen-centric comedies to more traditional and "legitimate" Hollywood fare. He's the one who brings the literally game changing mathematic theories to Beane's desperate attention. For that, maybe Beane should be spending the movie shadowing Brand like a puppy-dog, but instead it's the other way around. (For the record, there are significant Billy Beane nay-sayers who claim that his revolutionizing method is not necessarily new so much as dusted off from baseball's past. They also contest "Moneyball"'s portrayal of Art Howe, among other things.)

Besides all the baseball/business jockeying, Pitt in "Moneyball" turns in yet another of his newfangled father roles. Billy Beane is the father of a cherubic young tween (Kerris Dorsey) who serves to point out his own professional hypocrisy when it comes to his detached methods of relating to players and employees. Her expressed insecurities and worries about the ramifications of him being fired ("Will we have to move? Will I have to make new friends?") harkens directly back to an earlier chat in which Beane briefs (Jonah Hill) on the ways of impersonal firing, and (Hill's) own reservations about it. In the meantime, the kid charms him with her singing/songwriting skills, as she trots out a tween-ified version of that inescapable pithy Jason Mraz song. If that's not the Jason Mraz song, it's awfully close.

"Moneyball" is not the best movie ever made. I don't even know if I'd pronounce it the best baseball movie ever made. Just how imperfect you find it will depend upon your tolerance of transparent movie star-centric storytelling trappings within a project that is itching and aching to transcend such things. But if you love baseball in the casually reverent way most folks in St. Louis do, "Moneyball" will warrant an extra high mark on your scorecard. If you know a whole lot about inside-baseball minutia, then Beane's self-glorifying portrait will likely irk you. If you're looking for a good time at a baseball movie whatever the facts may be, then you'll go for this film, a proudly swaggering Brad Pitt movie, through and through.