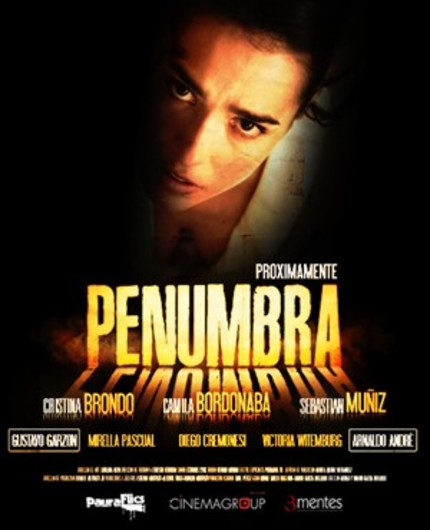 No movie is set unintentionally on the day of a solar eclipse, and that includes Penumbra, the new movie from Adrián and Ramiro García Bogliano. Like Cold Sweat, their immediate predecessor, Penumbra takes place in and around an aging apartment building in Buenos Aires, Argentina. But the similarities end there (except for a little "oil on woman" action).

Maragarita Sanchez is a high-powered business woman from Spain. She is dressed sharply as she paces on a sidewalk, speaking expressively to her sister via cell phone. Margarita is not particularly happy to be spending time in Buenos Aires; she considers the city to be a cesspool, but the family owns an apartment there and she must spend a couple of months riding herd on the local branch of the company where she is employed.

She reads the riot act to Jorge, a realtor who has a client who may be interested in renting the apartment, because Jorge is late for the appointment, and Margarita is a very, very busy woman (time is money and all that rot). Her attitude toward Jorge only changes when he indicates that his client may be willing to pay four times what the place is worth -- but the paperwork must be signed right away, which would force Margarita to postpone her other appointments. With a mercenery gleam in her eye, Margarita agrees to wait, and even loans the realtor her call phone.

The attentive viewer may, quite rightly, question Margarita's foresight at this point. Doesn't it seem strange that someone would be willing to pay four times the going rate for a place in an apartment building that has clearly seen better days? And having to wait will mean that the client arrives right around the time the solar eclipse is scheduled to occur.

Margarita dismisses any concerns she may be harboring -- she's only shown briefly considering the inconvenience of a delayed schedule -- and that ties into her arrogant personality. She treats others with indifference, not only Jorge the realtor in person, but also a work colleague and her boss on the phone. Margarita conducts herself like a queen among the peasants, and that attitude also manifests itself when she deals with a homeless man begging for change outside the apartment building. The man has problems, obviously, but Margarita's outsized, outraged reaction only results in sympathy being elicited for the street beggar from onlookers.

She becomes even more isolated when she returns to the apartment to discover another stranger has arrived, supposedly from the realtor's office. The disquiet of a solar eclipse spreads to the beatdown apartment.


The story takes quite a long time to ramp up, but that allows Margarita's character to be explored; she's a proud woman, but that doesn't prevent her from appropriating someone else's personal story to further her own career goals. She looks down on Argentina and its citizens, never considering that her attitude and arrogant actions might come back to bite her.

The movie is a step forward for the Bogliano brothers, who are both credited for the script and direction. While there are elements of the script that could be picked apart, the force of nature expressed by Cristina Brondo as Margarita blows down any concerns. Hers is a fiery personality, the kind that you don't want to cross. When her hard shell begins to crack under the stresses exerted by Jorge the realtor, or when she loses her temper on the cell phone with her boss, my instinct was to lean back from the screen to avoid getting hurt.

Penumbra doesn't achieve everything it sets out to do. For one thing, the soundtrack appears at odds with the action in certain sequences, the musical accompaniment switching to a jazzy temper and then back to a quieter mode, or even to the more traditional minor-chord mood of a suspenser, and often with little apparent reason. And certain aspects of Margarita's encounters with the locals clash with the main thrust of the story.

Overall, however, Penumbra is a more assured piece of filmmaking, a slow-building, above-average thriller that leaves itself open to pretty much any moral lesson you wish to apply, especially the one about reaping what you sow.