ETRANGE 2011: THE MILL AND THE CROSS review 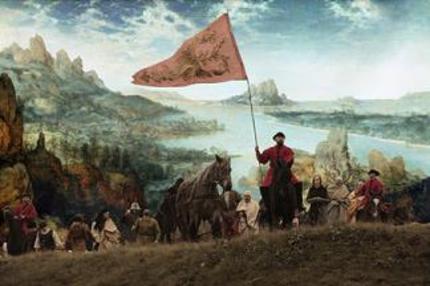 Lech Majewski's The Mill and the Cross is odd. More two hours of art appreciation than an conventional film, it tells the story (or possibly a story) of the artist Pieter Bruegel the Elder and what it was that led him to create his painting The Road to Calvary. The great man (played in a surprising turn by Rutger Hauer) sits behind his canvas, watching Flemish peasants go about their daily lives, and muses over how best he can get all of it into the finished piece. Sometimes the film treats the painting as a literal representation of what Bruegel observed, other times it's a strange mix of allegory and half-truth. The painter sees the arbitrary cruelties meted out by mercenaries loyal to the king of Spain (who ruled Flanders at that point), say, and works those in as social commentary but the crucifixion is treated partly as a dreamlike recreation of Jesus Christ's final days, partly as if Bruegel is losing his own son.

Majewski and his crew employ a stunning array of digital effects and meticulously detailed costumes that place the cast inside Bruegel's work, the world presented as the artist ended up painting it. Crowds of extras pose against green-screen backdrops that warp the Flemish countryside into strangely foreshortened perspectives in delicate washes of oil paint, complete with dizzyingly attenuated cliff faces, dark, brooding forests and rolling grey blankets of cloud. All of which is achingly gorgeous, but The Mill and the Cross still takes a lot of work to get anything out of; it's grindingly slow, takes its time getting anywhere and doesn't seem that interested in making a point. Bruegel despairs of the depths humanity can sink to, makes a painting about it, life goes on. Anyone who doesn't care for arthouse films in general would probably be better off staying well clear.

Which is a shame, because there's much to admire about Majewski's dogged commitment to the concept. The Mill and the Cross is hardly that original - people have tried to explain the idea paintings were the documentaries of their time before - but the director's use of technology pushes the boundaries in some wonderfully inventive ways. The titular mill in the background of The Road to Calvary, perched high on an impossible spire of rock, is represented as if it really existed, for example; the miller climbs a titanic stairway up through the cliff to start the sails turning, then later stands looking down on the crowds, a stand-in for the Almighty. Sometimes the effects are a little more low-tech; when the painter explains his motivation to a wealthy patron (Michael York) the crowd simply stands there as Bruegel points out different figures and what they signify, like a theatrical performance halted in mid-scene.

Again, the film is all but wordless for most of the running time, and what dialogue there is tends towards the expository. Hauer, York and Charlotte Rampling as Mary are the only major speaking parts. York is the weakest by far, audibly struggling with the flowery prose - he seems to get the most superfluous lines, and the veteran actor's plummy English tones and crisp diction don't help them seem any less obvious. On the upside, Rampling is effortlessly convincing as a mother hollowed out by grief after watching her son die a gruesome death, and Rutger Hauer proves almost as compelling. Obviously the man can act, but given he's better known for blood and thunder Hauer proves surprisingly good at embodying Bruegel's patient calm, likening himself to a spider pulling together the strands of its web. And he turns his age to his advantage, too, his grizzled features giving the part an air of patrician gravitas.

That feeling this isn't quite a film never really stops nagging at you, however. The Mill and the Cross is fascinating viewing if you can engage with it, but for all the craftsmanship it feels frustratingly flat at times. It's partly how obtusely it's been put together, with no background beyond the clumsier lines of dialogue and key scenes slipping without warning between medieval nastiness and flights of magical realism. It's partly that dialogue, and the way Majewski seems undecided whether to go for a full-on tone poem, dropping words entirely in favour of captivating visuals, or something more populist. The Mill and the Cross occasionally feels as if it's trying to tell you something, which isn't necessarily a bad thing by itself - there's nothing wrong with an art history lesson per se, it just feels annoying when you leave one half done.

Still, film or not there's not much else like it. The Mill and the Cross is hard to recommend, given it's so hell-bent on doing its own thing: unless you're interested in slow, meditative arthouse and/or speculating about the life of one of history's greatest painters, there's little if anything here to hold your attention. It's an undeniably beautiful film, stunningly accomplished bar a couple of minor flaws, but all Wajewski's artistic flair doesn't stop it from feeling disappointingly removed from its subject matter. The director is studying the painting far more than the events that led to it being painted. Still, if you can get yourself in the right mood seeing Bruegel's work come to life can be a transporting experience; this may be rarified stuff, but the film still possesses more than enough subtlety and grace to make it rewarding for anyone who can take it. If you're interested, and you're willing to put the effort in, consider The Mill and the Cross recommended.

(The Mill and the Cross was screened as part of the 17th L'Etrange Film Festival at the Forum des Images in Paris, run from 2nd-11th September 2011.)