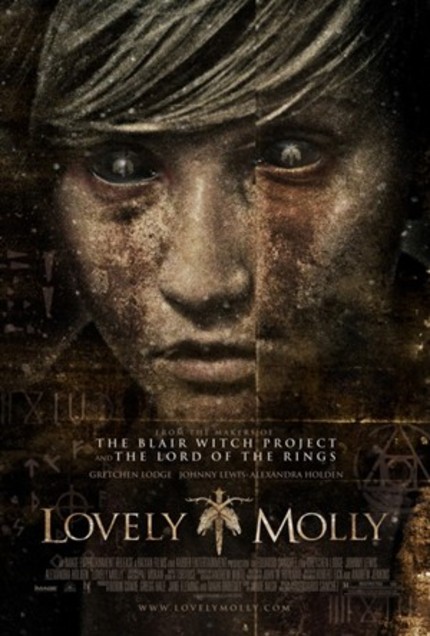 Director Eduardo Sanchez has never quite escaped the shadow of his debut film, The Blair Witch Project. It's understandable given the enormous impact that picture had but it is somewhat tragic as Sanchez has very quietly gone on to become on of the indie horror scene's stronger voices, and - in my opinion at least - he's never turned in a better film than he has with Toronto International Film Festival Midnight Madness selection Lovely Molly.

Newlyweds Molly (Gretchen Lodge) and Tim (Johnny Lewis) move into Molly's deceased father's house in the countryside. An ex-addict with a deeply troubled past, Molly is strong in her new life of recovery. Unexplained disturbances in the night unnerve the couple, and when her husband goes away for business, Molly is left in a house that holds many painful memories. Her isolation is soon shattered by a mali­cious presence that unleashes a physical and mental assault. As she struggles to regain footing in her simple existence, Molly's grip on reality begins to waver. Her erratic behav­iour is a warning sign to her friends and family, whose interventions drive her further into solitary torment and spur a deep, dark infidelity within her.

A dark slow burner that will live audiences debating whether supernatural forces were at play or not, Lovely Molly tackles some incredibly thorny subject matter that may make it tough for distributors to put it on screens but, challenges aside, it also shows how far Sanchez has come as a writer and as a director capable of drawing strong performances out of his cast.

The first trailer for the film has arrived to put a chill down your spine. It focuses entirely on the more extreme elements of the film - the picture itself is far more character driven than this trailer implies - but manages to do so without spoiling any of the big moments. Take a look below.