RISE OF THE PLANET OF THE APES REVIEW 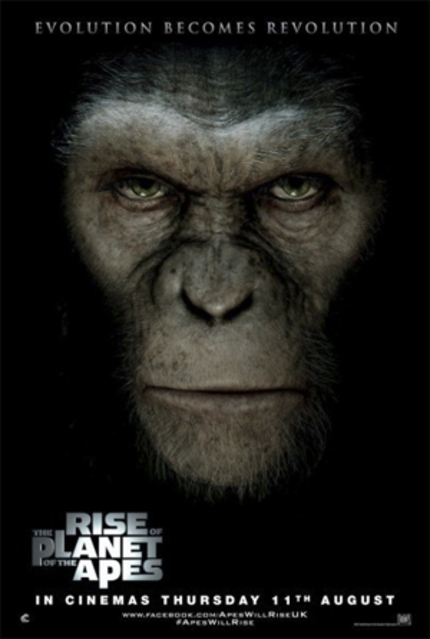 Monkeys, or apes more correctly have been the butt of our jokes for decades. Those cuddly little bastards have put on roller-skates, smoked cigars and dressed up in corporate suits for our entertainment. Countless movies have been made about the quirky relationship between man and ape, Clint Eastwood even made two of them and Matt LeBlanc destroyed his movie career with one. But that quickly changed recently when a live in chimp attacked and tore the face of its owner and had to be gunned down by police. That incident kept popping up in my head when I watched the first half of Rupert Wyatt's APES prequel/reboot RISE OF THE PLANET OF THE APES.

PLANET OF THE APES is a franchise that fairly recently popped up its head again with Tim Burton's ill faded mess but other than that it has survived on its fan base alone and its iconic first film featuring a grizzled Charlton Heston battling metaphors. What RISE attempts to do is to explain how a 43 year storyline came to be and potentially re-start the franchise for a new generation.

James Franco is Will Rodman, a scientist who is designing a new drug to battle Alzheimers. He experiments on chimps and some of them start to show great improvements in terms of intelligence. But when his prize pupil suddenly becomes enraged and attacks its captors it's quickly put down by force and the experiment is scrapped. Distraught, Will sneaks away a baby chimp, the offspring of his number one guinea pig, and a few doses of the drug to use on his father and continues his work at home. It seems that the baby, named Cesar, shows incredible signs of intelligence and over the years he grows up as one of the family. Will's father (John Lithgow) seems cured from his advanced stage of Alzheimers and Cesar is getting smarter and smarter, learning to communicate and to behave more like a human but also sees that he is different and not accepted by the world around him. But of course things don't stay that rosy. The drug stop working and Will's father has a massive relapse. It's after an altercation between Will's father and a very, very annoyed neighbor that Cesar is removed by animal control and sent to an ape sanctuary run by Hannibal Lecter and Draco Malfoy so you know it's not going to be good. Meanwhile Will works on a stronger version of the virus in a desperate attempt to save his father.

In the sanctuary Cesar experiences how chimps and other apes behave and how badly they are treated by the humans that work there. There he hatches a plan to over throw his captors and free his fellow apes with catastrophic results.

I've got to be honest that at first I really didn't think this film would work, not being a big APES fan for one thing and to begin with the film rolls around in clichés about how people can be evil bastards and it seems that in this world a chimp, even one that has been living among people for years, freaks people out more than anything. And you have to question the decision to hire a person who clearly hates animals to work in an animal sanctuary. But when the third act kicks in the film really takes flight and becomes fantastic. As the first films in this franchise the story is all about metaphors and allegories. The Charlton Heston film did the old switcharoo on the segregation issue and this one deals with the age old question about whether man should play God or not, as explained briefly by the rather useless female lead in the film.

Subtly the film sprinkles in ideas that make up the APES canon in a way that seem to make sense and resolve concepts that made up the first one. Of course the filmmakers throw in little homages to the previous films, although I could only recognize references to the first one.

The science fiction aspect of the story is decently handled, the filmmakers are not too desperate to explain how the wonder drug works and for most of the time you don't really care, but there is one instance where I would have like to have explained how one thing came to be, and it's a big thing that's completely ignored by the filmmakers and most of the characters it seems. But that's the logical side of me talking.

The first PLANET OF THE APES film was revolutionary in terms of make up effects with John Chambers´ creations and the one thing that Tim Burton's version got extremely right was the Rick Baker created ape make up. But because RISE deals with regular apes but not the evolved kind, it has to rely on CGI to create the simian characters. WETA for the most part nail it, the earlier versions of Cesar look slightly too "animated" and computery but when he gets older it's almost impossible to see if the thing is created electronically or really there on set. I have to say that the best WETA creation in this film is the orangutan who is absolutely astounding in its realism. WETA do manage to give these character life with the help of Andy Serkis and his crew of performers and you do feel for these creatures which is essential for this type of film. The rest of the cast led by Franco do a decent job but some of these characters seem to be there only to enforce stereotypes or to push information. Freida Pinto's character is just window dressing, bringing nothing to the story or has any impact on it. Brian Cox and Tom Felton are the stock villains only there so we cheer when the apes finally overthrow their chains. Nobody is getting an Oscar for their performance. Rubert Wyatt handles both the character scenes and the action well but I haven't seen any of his previous work so I can't really comment on how different that is.

So yes. RISE OF THE PLANET OF THE APES is a lot better than I thought it would be and I think it paves the way to the original story line really well and should satisfy both old school fans and hopefully entice new viewers to check out the original series as well.