RISE OF THE PLANET OF THE APES Review 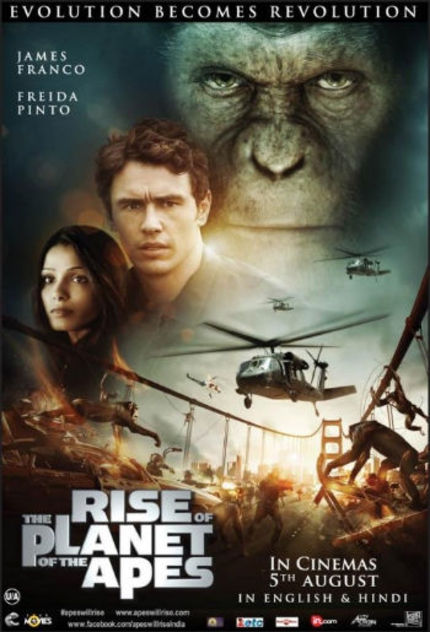 Until it succumbs to blockbuster-itis, and its sister virus Reboot Syndrome, Rise of the Planet of the Apes forges its own distinctive trail, powered by smart choices, good direction by Rupert Wyatt, and splendid-looking creatures. And by that point, it's built up such a propulsive head of steam that you may embrace its excesses.

It's a clever take on an origin myth, one that appears to have been influenced as much by the true story behind Project Nim and the cautionary aspects of Hollow Man as by its rebellious forefather, Conquest of the Planet of the Apes. Will (James Franco) is a research scientist at Gen Sys, a giant pharmaceutical company that is obsessed by profits, as Will's boss Steven Jacobs (David Oyelowo) likes to remind Will. Will is obsessed, too, but he's driven by concerns that are closer to home and heart than wallet.

His father (John Lithgow), a former music teacher who now lives with his son, has Alzheimer's Disease, and Will is desperate to find a cure. He thinks he's made a major breakthrough with a formula that will enable cells to repair themselves, and extensive testing he's done with a chimpanzee appears to provide proof. Unfortunately, things go disastrously wrong, and Jacobs orders the project shut down. That means all the experimental subjects (i.e. the monkeys) are terminated, save for an infant chimp that no one knew about, one that Will's assistant Franklin (Tyler Labine) can't bring himself to put to sleep.

Neither can Will, so he takes him home for a few days, and a few days turn into three years. Ceasar, as the ape is named, displays remarkable intelligence, and Will recognizes that it's the result of Ceasar's mother being injected with experimental serum. Even though the project has been officially shut down, Will continues his work at home, and it's this section of the film that feels heavily influenced by the real-life Project Nim story, in which a human family raised a chimpanzee as though he were just another child. Well-meaning humans ended up wreaking damage on poor little Nim, especially after he began acting like an ape rather than a human.

Much the same thing happens here, except that Caesar has the benefit of the experimental serum, as well as some creative screenwriting (credited to Rick Jaffa and Amanda Silver) and the superb motion capture/CGI effects (based on another excellent performance by Andy Serkis), which, all together, give Caesar an outsized dimension to play with. His intelligence develops at an alarming pace, one that excites Will to the point that he tries the serum out on his dad, who responds to the medication in an amazing, gratifying manner. Will has met a veterinarian at the zoo (Frieda Pinto), and begins a relationship with her. She occasionally sounds a warning, but Will is determined to continue his project, no matter what.

Meanwhile, Caesar's progress appears to be halted when he must be moved to a primate shelter, where he encounters a mildly disreputable keeper (Brian Cox) and his thoroughly despicable son (Tom Felton). Wonder of wonders, this extended portion of the film is a marvel of economical, non-verbal filmmaking, nearly a silent epic that smartly updates selected scenes from Conquest of the Planet of the Apes, accompanied by Patrick Doyle's percussive musical score and Andrew Lesnie's glistening, increasing moody photography.

But it's also where the filmmakers get carried away with Reboot Syndrome, the burning desire to recycle lines and multiple bits of business from the original series. Call it homage or call it fanservice, it feels like throwing bananas to the monkeys; one or two callbacks are fine, but more than that is unnecessary, especially when it calls attention to itself to make sure you don't miss its self-defined cleverness.

Blockbuster-itis manifests itself in the final section of the film, where the desire to make everything bigger works against the smaller-scale dynamics that made the original series effective. If the filmmakers learned anything from the original series, it should have been that good ideas, executed well, can overcome even relatively small budgets. Perhaps a smaller budget would have restrained some of the more extravagant, less believable aspects of the film.

As noted at the outset, however, by the point that reality takes flight completely, Rise of the Planet of the Apes is already boring ahead at full speed, shoving possible objections out of the way through sheer force of will. You will root for the apes to win, even though you know it's a foregone conclusion.

Rise of the Planet of the Apes opens wide across the globe today. Check local listings for theaters and showtimes.