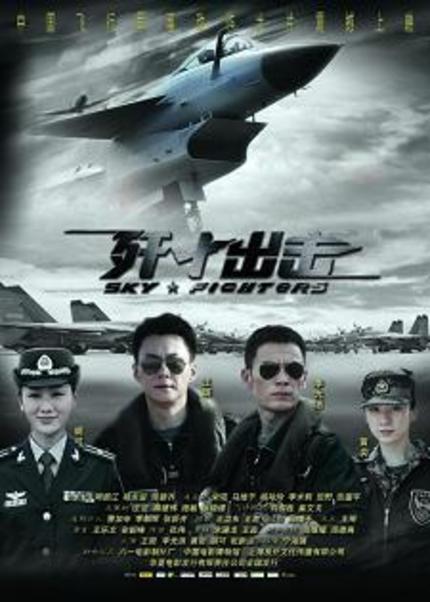 The best way to sum up Ning Haiqiang's Sky Fighters (aka Lock Destination) is like so: it turns out if you reinvent Top Gun as a propaganda reel/recruitment drive for the Chinese air force, it's really, really boring. It seems laughably obvious when I put it like that, but there's something quite startling about how tedious Sky Fighters gets. Technically, despite a few too many helpings of cheap and cheerful CG it's actually not that bad, and the cast give a fair bit of life to what are little more than the first few pages out of the Big Book of Party-Approved Stereotypes. It's just a bit too obvious the filmmakers were anxious not to show their subjects in any remotely negative light, to the extent the story - such as it is - comes off as a slow procession of mundane slice-of-life vignettes jacked up on thundering strings and silly camera angles.

In place of a maverick new recruit rubbing everyone up the wrong way, Sky Fighters' central conflict centers around the appointment of the new commander for division 903, with two men tussling for the prize; Yue Tianlong is the officer who plays things by the book, Yin Shuang Hu the cocky, petulant wunderkind who thinks the post is his by right. When Yue gets the nod after the higher-ups find fault with Yin's handling of a potentially fatal accident - showboating in the sky while one of his pilots struggles to land after a bird flies into his intakes - the stage is set for ninety minutes of manly squabbling while the two learn to appreciate each other's devotion to the motherland and everyone ultimately agrees flying in the Chinese air force is the best career anyone could hope for.

Calling the story mundane is relative, obviously. To be fair to screenwriter Ma Weigan day-to-day life for a fighter pilot probably does involve risking your life in any number of different ways. Still, even people who dismiss Top Gun as boys playing soldiers often enjoy it regardless, given its love of masculine American jingoism is so cheerfully unhinged. Sky Fighters is reined in every which way in comparison, shorn of cold war-era paranoia, bro-fisting machismo and selfish indulgence. What's left ranges from grindingly petty to disturbingly camp; again, the conflict starts with a bird flying into someone's engine, but the fallout over this is shot like an outtake from A Few Good Men.

Every one of the cast clearly knows exactly what kind of film they're making, admittedly, and the two leads give every impression they're having fun, despite how ridiculous their roles are. Still, none of this helps too much when there's literally nothing beyond the most basic outline for anyone; Sky Fighters doesn't even have a flashback montage, or the two leads butting heads, or any conflict going horribly wrong - any kind of genuine peril rooted in character development gets sidelined in favour of achingly slow pans across the division's military hardware, or people discussing the value of a standing army, or lengthy soliloquys about the best way to keep birds away from an air base.

Make no mistake, this is explicitly a piece of propaganda, not merely mainland China trying to outdo Michael Bay. When Yue addresses a lecture hall full of university students, it's the foreign extras in the crowd who hand him the opportunity to state how much more awesome he is than George Bush Jr. (I mean, really? Dubya already joked he could barely speak English years ago). The characters don't get a single moment out of uniform, there's nothing they can talk about without relating it to their careers in some way and again, they barely discuss anything beyond military service as it is. There's a very brief subplot highlighting the charms of the pretty female student who's come to sort out the bird problem, but it hardly goes anywhere next to the leads' halting bromance.

Not that you can really push that angle. Obviously there's nothing wrong with serious war stories but Sky Fighters still pushes all the same buttons as Ridley Scott, it just feels... neutered. Everything that might get in the way of singing China's praises gets neatly snipped out. Women don't interfere, tempers are largely kept in check, and we never go that long before events return to plan. Even the climax, where Ning finally lets his stock of pyrotechnics loose, is very obviously straining to glorify the protagonists but not to offend anyone at the same time, and it ends up frustratingly bloodless in every sense. Say what you like about American war porn, but at least it gives the impression someone had fun putting it together.

That's basically the cardinal sin here. For all the effort that presumably went into making the film, Sky Fighters never seems like anyone really cared about it. The whole thing barrels past in a rush of flaring afterburners, dizzying aerobatics and grown men sulking at each other, and five minutes after the credits have rolled you're struggling to remember what just happened. You can attack mainland propaganda for glossing over countless ugly truths, but the best of it can still be entertaining; Tiananmen ignores Tank Man, but until then it's still genuinely compelling watching, if simplistic. Sky Fighters is simply boring. Ning Haiqiang's film never offers any reason why it should be a movie, rather than a recruitment poster or TV spot, let alone why anyone should actually watch it. It's just boring, and as such is pretty much impossible to recommend.

Do you feel this content is inappropriate or infringes upon your rights? Click here to report it, or see our DMCA policy.
Haiqiang NingWeigan MaKe HuYi HuangGuangjie LiBan WangActionDrama