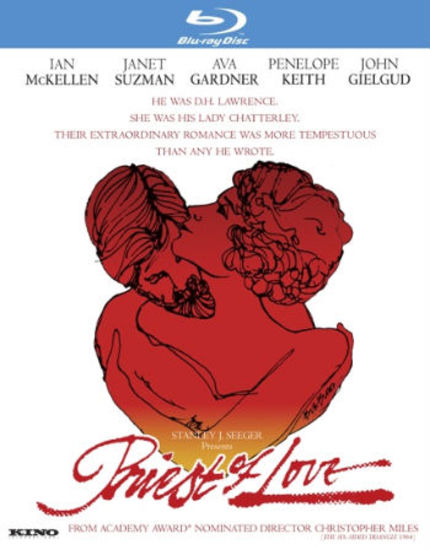 Featuring Ian McKellen in his first starring role, 1981's Priest of Love explores the latter years of novelist D.H. Lawrence, picking up his story in 1914. The film, directed by Christopher Miles and adapted by Alan Plater from a biography by Harry T. Moore and the letters and writings of Lawrence, moves quickly, establishing that the writer married a German woman, flitting ahead a year later to the public burning of his book The Rainbow for alleged obscenity, and then settling for a while in 1924, as he moves to the United States.

It feels like being tossed into the deep end of a man's soul, but McKellen proves to be a solid anchor. The actor, 41 at the time, had many years of experience on the stage at that point -- he won a Tony for his performance as Salieri in Amadeus, which premiered on Broadway in 1980 -- and made a smooth transition to a leading role in this film.

It helps that Lawrence is a dramatic, outspoken, charismatic character. He's matched in his fiery nature by his wife Frieda (Janet Suzman), who left her husband and three children for him. She is fiercely protective of Herbert; the term "like a lioness defending her cubs" comes readily to mind. With its highly-episodic nature, Priest of Love is structured like a bio-pic, but the focus is tightly fixed on a love story for the ages.

It's relatively rare nowadays to see two middle-aged people portrayed as a loving couple on the big screen. Director Miles does not shy away from the carnal component of their relationship. Though there are brief glimpses of nudity, including full-frontal shots of McKellen, it never strays into exploitation territory. These are two people who are deeply in love and still physically attracted to one another. Even when they are tempted by others, they keep returning to the welcoming arms of wedding bliss.

The Lawrences travel to New Mexico with their artist friend Dorothy Brett (Penelope Keith) at the invitation of the spirited Mabel Dodge Luhan (Ava Gardner, in one of her final films). Mabel wants to patronize D.H.'s work, but D.H. will have none of it; he hates gifts, among other things, and insists on selling Mabel an original copy of of one of his manuscripts to pay for a tiny ranch house on her property. The Southwest landscape inspires him creatively, but his tempestuous personality brings him into conflict with Mabel, and he and Frieda move onward to Oaxaco, Mexico. Neither speaks Spanish, but D.H.'s natural ebullience serves him well until his long-brewing illness is diagnosed as tuberculosis.

That prompts a further move to Italy, where Frieda is drawn to their handsome landlord and D.H. considers satisfying the unrequited yearning of the socially awkward Dorothy, who has gazed at him longingly for years.

While keeping the love story at the forefront, Priest of Love also addresses the issue that dogged Lawrence throughout his too-short career, namely, that of censorship. His books have been consistently banned in the U.K., as represented by sniffy prosecuting attorney Herbert G. Muskett (John Gielgud), as well as the U.S. And one look at his artwork assures that his paintings, too, will be given harsh scrutiny when they're exhibited in London. Still, his painting rekindles his desire to write, leading to the publication of Lady Chatterly's Lover.

Lawrence did not so much court controversy as he lived his life and wrote what he felt. McKellen captures the spirit of a stubborn, robustly creative, and eternally romantic man.

The Blu-ray from Kino International looks absolutely impeccable. (Check the link below to screenshots posted by Blu-ray.com.) The image is soft and pleasant, reflecting the intentions of the filmmakers; it helps create a consistently lovely background, even when the foreground action is unpleasant to behold. The transfer is very clean. The original English-language audio track will not tax your system, but it sounds faithfully reproduced.

The extras, prepared for the film's release on DVD in 2002, are presented in standard definition. "The Way We Got It Together" is a 26-minute feature that does exactly what is advertised. Director Miles explains how the production came together, the challenges and benefits of filming on location, working with Ava Gardner, and the reaction to the film. His comments are supplemented by behind the scenes footage and interviews with cast and crew, including an extended talk with Penelope Keith.

Miles conducts an interview with McKellen that runs 24 minutes. It's a relaxed, informal chat, filled with fond remembrances, and culminating with the actor telling the director which scenes he didn't like in the finished film, and why. Miles is also featured in an 11-minute clip from a British TV program, in which he's interviewed by a host as well as an expert on Lawrence, and fields questions from a small audience.

Seven minutes of deleted scenes are included, with Miles explaining where they fit into the narrative and why they were removed. Five minutes of outtakes, three Still Galleries, and the original theatrical trailer (plus trailers for three other releases from Kino) round out the package.

Priest of Love is definitely worth checking out for fans of McKellen -- and, really, who isn't? -- and paints an intriguing portrait of an artist who was sadly under appreciated in his time. Kino's Blu-ray does a good job of honoring that vision.