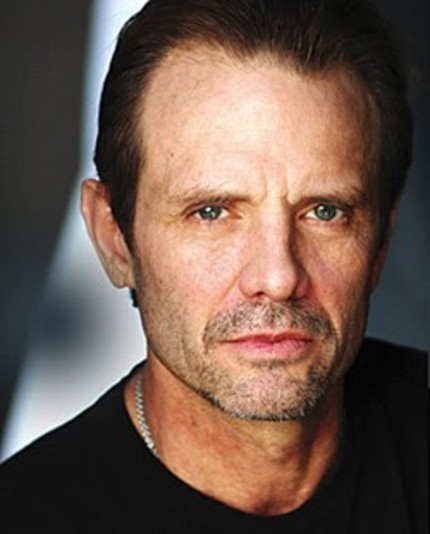 [Our thanks to The Night Crew co-host Thom Carnell for conducting the following interview.]

Back in May James Marsh commented negatively about the then titled film SHADOWGUARD (aka THE BLOOD BOND: SHADOWGUARD aka THE BLOOD BOND) here at ScreenAnarchy in a post regarding the domestic release of the trailer for Bey Logan's latest film, BEACH SPIKE prompting a response from writer/director/actor Michael Biehn.  In his note, Beihn said, "To call the movie referenced above my directorial debut is a farce. The role of Director includes several aspects of movie making which I had no part in. I was not involved in the casting, (nor did I write the script), I was not involved with editing, sound mixing, colorization, music, ADR, or any other aspect of post production. Also, all of my dialogue in the movie was voice over from another person. The crew was the least experienced and the most unorganized that I've experienced in my 35 years of being involved with movies and I had very little say in both day to day production or the final product. In fact, I had so little to do with the movie that I haven't even seen it, to this day."

In the spirit of fairness, ScreenAnarchy recently spoke with Biehn and learned a bit about what exactly his role was with THE BLOOD BOND and what influence he had on the finished product.

ScreenAnarchy: I wanted to talk to you a little but about a post you'd made on ScreenAnarchy about a film you were reportedly to have directed, BLOOD BOND.

Michael Biehn: Basically, I went over to China to direct and write a movie. Well, I wrote it along with some other people. So, we made the movie over there, but we weren't shooting in Shanghai, we were shooting at a little studio and the crew there was not very experienced at all. They didn't have any experience and I wasn't ready for that. As a result, I had to take on multiple roles and it was very, very hard shooting it.

The actors didn't speak English. They were having to work phonetically at times. They didn't seem to have any money for cast, so we were pulling people off of the crew for roles and stuff like that. So, it was a very, very difficult shoot, but I thought I'd put something in the can that was decent and something I could be proud of.

What happened was... when I left China, the producer (Bey Logan) decided that he was going to cut the movie and he was going to do all of the Post Production and never give me a chance to cut my own movie. I was so busy when I was working on the movie putting in like twelve and fifteen hour days and doing everybody's job for them. I had a couple of people who knew what they were doing, but not very many. So, he took over the movie and he cut it and put the music on and went and did all of the sound... and that's that, really.

He sent me his rough cut which I thought left a lot to be desired. I thought there was a lot better film there than what he cut and what he made, so... I sort of washed my hands of it at that point and said, "Whatever..." He paid me, so I just kind of walked away from it. It was a tough experience because I'd put so much energy, so much time, and so much effort into getting it into Post and... After doing THE VICTIM, I realized that the Post is so important: the cutting and the music and the sound, just the whole deal. That's really where the music is made, really. That's where the movie comes together.

It's like being a quarterback on a football team and playing the first half of the game and you play another good team and you're really struggling, but you have it tied at half-time. Then, you get pulled and some other quarterback comes in and you end up getting beat by forty points. That's kind of how I felt in this situation.

ScreenAnarchy: Was that the reason your voice was dubbed in the film?

ScreenAnarchy: How was that all handled? Were you just told or was there any discussion about it?

MB: Well, I was back in Los Angeles and Bey Logan made the decision that he was going to cut the movie himself and he called me. I thought he was either going to bring the film to LA or I was going to go back to Hong Kong and do all the Post in it, but he just said, "Don't worry about it. I'm going to take care of it all from here on out."

Of course, I was upset about it at the time, but that was his decision. I think it was a poor decision. He didn't do a very good job if it is anything like the rough cut that I saw. I never saw anything after that. I've never seen the finished version or anything. I'm not interested in it, but like I said... I thought that there was a decent movie there, that I had shot a decent movie. From what I understand, it is not. It's a bad movie.

It's too bad, but it was not my decision and... what am I going to do, fly to Hong Kong and sue him? It's ridiculous. I just thought, "Ok, if that's what you want to do, then do that," but I thought he was kind of hurting himself by making that decision. But that was the decision he made.

It's just that Post is so important, especially the sound. There's just so much that can be done in Post. Certainly, when you cut a movie, it can be cut a thousand different ways. The rough cut that he sent me just didn't resemble what I thought I had in the can - at all. I didn't even watch it all. I watched about fifteen minutes of it before saying, "Ok, well... that's something, that was an experience." But it was difficult for me because I'd worked so hard on it. It was really, really difficult just getting it in the can. It wasn't even the language barrier so much as I had a completely inexperienced crew. I had a First A.D. who had never been a First A.D. before and he spoke English. I had no Set Dressers. I had really nobody that had any experience on the crew other than the cameraman... and that was about it, really. So, I was running around doing everybody's job.

It was like playing a baseball game and having no short-stop, no second baseman, and only one outfielder and you're playing against a regular team. That's how I felt while I was out there. I was playing everybody else's position and it was exhausting and pretty brutal. But like I said, I thought I'd put something in the can that was half-way decent and I was excited about getting in there and cutting it and seeing what I could do with it, but... we'll never know what that movie could have been.
.
Interview by Thom Carnell
Tweet Post Submit

More about The Blood Bond