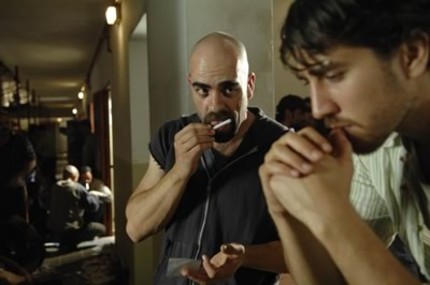 Opening in the UK this Friday, the mutiple-Goya-award-winning Spanish feature Cell 211 is not your typical prison riot film. It makes Cool-Hand Luke look like Driving Miss Daisy, and works not only as a gritty action film, but social realism as well. Director Daniel Monzón co-wrote the script with Jorge Guerricaechevarría (frequent collaborator with Álex de la Iglesia) as an adaptation from the novel by Francisco Pérez Gandul. It tells the story of Juan Oliver, an ordinary man caught up in not only an extraordinary situation, but a deadly one, and it is a vice that never gives its audience a moment to think, like its main character.

Juan (Alberto Ammann) is starting work as a prison guard; in an effort to impress his new employers, he comes in the day before to take a tour. A piece of ceiling falls on his head, giving him a concussion. The other guards put him temporarily in an empty cell. Then the prisoners, in this the most dangerous section, break out and proceed to hold political terrorist prisoners hostage. Upon waking, Juan realizes what has happened, and also realizes he must pretend to be a prisoner if he is to survive.

All this happens in the first ten minutes of the film. It is all the introduction we get, and that is one of the film's best devices. Next to no time is wasted on preamble, or backstory; none of it really matters. The spectator is given small clues as to Juan's relationship with his wife to give us small insight into his character. But he is the only one we get to know, which is as it should be. The film is seen mainly through his eyes: the spectator, like Juan, must think beyond on his feet. As is stated by one of the prison official watching on the security monitors, the prisoners responsible for the riot are those who have nothing to lose, as they have no chance of ever leaving prison. As Juan tries to keep up his role as prisoner and steer the rioting prisoners away from extreme violence, he learns some of the hard truths about the prisoners' lives in jail and starts to turn to their side.

Juan's main contact and secret adversary is Malamadre (translation: bad mother). He is a hardened criminal with no hope of getting out and nothing to lose, and so improvement in what little conditions he lives in is seemingly the only goal. He has no qualms about killing guards, or other prisoners who might stand in his way; but he still has a strange code. He is played with intense ferocity and yet a certain integrity by Luis Tosar (who won a well-earned Goya for the performance.) You do not want to get on this man's bad side, and yet you strangely trust him. This could have ended up being a very two-dimensional character, but Tosar embeds him with such nightmarish violent intelligence that can only come from either a brilliant or a failed criminal and an odd world-weariness that you wouldn't mind having a drink with the guy. As long as he was in handcuffs.

A few flashback scenes show us Juan and his pregnant wife in the morning before he goes to the jail; and early in the film we are shown an inquiry interview with one of the guards, giving us clues to Juan's likely fate. While I appreciate the sentiment and desire to give a holistic view of the character, it felt unnecessary, and a little distracting, and I wanted to get back to the prison. There are few wide shots in the film, and the few that are, are usually so packed with prisoners that the claustrophobia is almost worse. Keeping the camera in tight forces the audience to look at these prisoners, not necessarily with great sympathy, but to understand the reality of their desparation and often complete lack of remorse or regret at the possibilities of the outcome of their violence. These are not pretty men, and their demands remain slightly unclear. But that is the claustrophobia: too much happens too fast for the characters or the audience to think, and each reaction happens in a split second.

At times, Cell 211 almost falls into prison film cliché of the wronged prisoners against the corrupt guards and officials. But it stays just far enough away and keeps tightening the noose around the audience and characters. The plot is mirrored in the frenetic editing and sense of speed that leave little or no time to think. The audience must keep up with Juan, and every punch feels as though it is being inflicted on them as they watch the horror unravel.