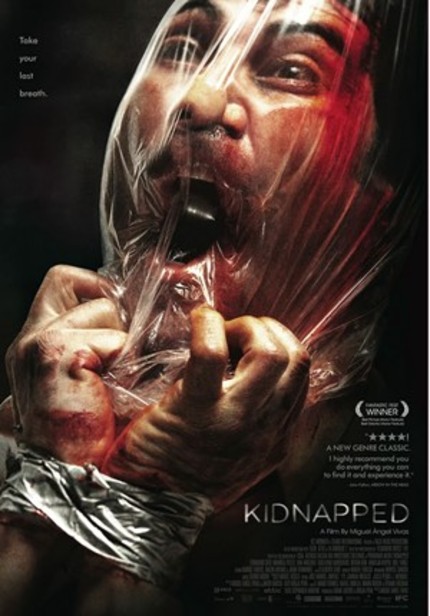 READERS BE AWARE: While we have been assured by IFC that the theatrical release of the film will feature the Spanish language version of the film with English subtitles, we have reports that the version now available via VOD is the English dub, with the original Spanish not available.]

The joy of the festival experience is the thrill of discovery, those moments when you find something special that you knew virtually nothing about before hand and realize that you were just part of something that you're going to be hearing much more about over the coming months. Last year the Fantastic Fest discovery was Tom Six's Human Centipede. And this year that honor belongs to Spaniard Miguel Angel Vivas and Kidnapped.

A tense, hyper real account of a home invasion that refuses outright to offer any comfort or solace to its audience, Vivas makes his debut with a picture that neatly balances character, action, tightly choreographed violence and incredible technical skills to create a picture of incredibly uncomfortable but undeniable power.

Jaime and Marta are an upper class couple in their late forties, in the midst of moving themselves and their rebellious teen daughter Isa into a gorgeous new home. Other than Isa chafing at moving away from her friends life seems pretty much perfect. Perfect, that is, until a trio of men smash their way into the house, beat the family to the ground and subject them to a night of terror.

Jaime is forced to gather all the credit cards in the house, then accompany one of the invaders to the ATM where they withdraw to the max on all of them, then sit and wait for midnight to come so that they can do it again. Marta and Isa are left home with the remaining robbers, held captive to ensure Jaime's compliance. What follows is fear, desperation and violence.

Director Vivas sets out here to create an accurate, hyper real rendering of the home invasion experience and he succeeds admirably. His camera roams with a restless energy, the entire film composed of only twelve shots designed to capture the action as it actually happens. By refusing to edit, by refusing to cut, Vivas leaves his audience trapped in the room with the family to share their mounting terror. This sort of approach demands great things of the actors involved and all of the principals deliver exactly that, the cast and crew having rehearsed together for three solid weeks in advance of the two week shoot to capture the full experience of the characters.

Kidnapped is a film that is all about experience. It has no grand statements to make, its goals are to make you share the emotion of the experience and it succeeds absolutely. This is an impeccably crafted, flawlessly performed film. Bleak and uncomfortable, yes, but incredibly powerful.
Tweet Post Submit