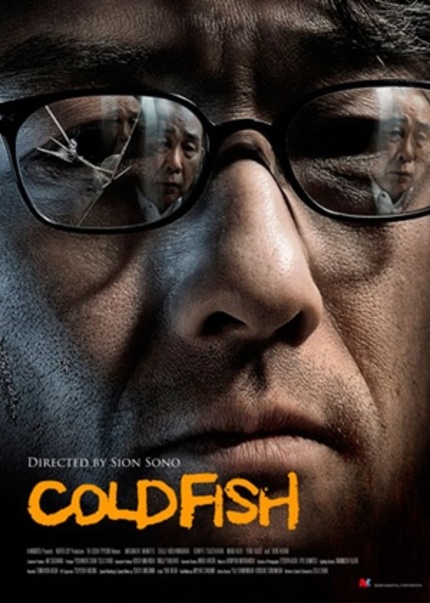 (Get ready to be sucker-punched with some REAL mysoginy, Grand Guignol-style!)

While we have lots of love for Sono Shion here at ScreenAnarchy, especially after his epic "Love-Exposure" stunned us, his latest film "Cold Fish" has been met with mixed reviews here. Peter van der Lugt was the first to write one more than half a year ago when he caught the film at the Venice Film Festival, and both he and Todd loved it. But next up was Teresa who found the content hard to stomach, and not because it was gory. Thing is, I can totally understand all of them although I tend to side more with Teresa.

For me Sono Shion's serial killer-thriller was the first film I saw at the International Film Festival Rotterdam this year and it both shocked and revolted me at several different levels. Not because it is a bad film (far from it, in fact) or very gory (although it is, at times) but because it must be one of the most mean-spirited and hateful movies I have ever seen.

What can possibly have gotten into Sono? Rest assured this is no "Love Exposure: part Two"...

As "Cold Fish" is about to be distributed in several Western countries I decided to add my two cents to the other reviews, also because the current opinions are so opposed. Read on...

Shamoto is a meek man with a small tropical fish shop. One day he meets Murata, the Ferrari-driving charismatic owner of a much bigger tropical fish shop. While Shamoto is impressed by the man's success but apprehensive of his jovial forward manners, Shamoto's wife Taeko and daughter Mitsuko really take to him. Mitsuko even gets a job in Murata's shop while Taeko convinces Shamoto to become Murata's partner in a potentially shady business deal.

But as soon as money has changed hands during the deal, Murata and his wife Aiko reveal themselves to be sociopathic serial killers, murdering those they borrow money from and making the bodies disappear in a gory but very effective way.

Easily bullied into helping the couple in their criminal activities, Shamoto becomes an unwilling accomplice. Having been mild-mannered and polite all his life, can he become "rude" enough to escape from his predicament?

Not only was this the first film I caught at the IFFR this year, it was also the first of two films in a row carrying the "Sushi Typhoon" logo, the other being "Karate Robo Zaborgar". Other typical "Sushi Typhoon" titles are "Helldriver", "Alien vs. Ninja" and "Mutant Girl Squad".
"Cold Fish" fits right in that short list as it is just as deranged a fantasy as the other ones, despite masking itself as some reality-based thriller.

Much is made in the media about "Cold Fish" being based on a real-life serial killing case in Japan, with the film following the murderers' modus operandi in minute detail. But apart from that bit you can ditch the whole "based on a true story" schtick. The protagonist is made up, the fate of all people in this film has been made up and the true case is only the flimsiest of backgrounds for Sono Shion to show off his ultradark worldview.

Because oh boy is this dark. "Cold Fish" paints a very damning picture of humanity in general and is especially vitriolic in its depiction of women.
All women.
As in: there isn't a woman in the entire movie who is not actively seeking out abuse and enjoying it to a certain degree when it finally happens to her. This depiction already gets pretty obvious and ridiculous near the end but the cackling maniac in the very last shot clinches it: women are mad, needy bitches. Anyone trying to sell this narrative as based on a true story may need to be examined.

Mind you, most of the men in this film are pretty bad specimens themselves so Sono may (-just-) get away with the "I am not a mysogyn, I hate everybody!" plea. But while the scariest maniacs in the film are male, the film has all women doting on these men because... well, all women want to be dominated by strong, confident men, right? And who is stronger or more confident than a serial killer with delusions of grandeur?
Also, amidst a string of perverse behavior Sono has women do some lesbian frolicking as well. Does that mean that he considers homosexuality to be as perverse as the other acts, or is the perversity in that the couple choose a particularly inopportune moment?

I truly hope Sono Shion meant this subtext as straight satire but he gives me little evidence to hang on to that theory. Well, apart from the rampant black humor practically pouring from the film. Either Sono is playing a good joke on me or pissing me off here.

And it's a shame that this gets as distracting as it does because the rest of the film is actually pretty damn good. "Cold Fish" starts with a slight feeling of dread but after the first few reveals Sono ramps up the tension. And although many in the supporting cast are delegated to be shown as mere cyphers, all the main actors deliver good work here. Fukikoshi Mitsuru in particular is very good as the meek, bullied Shamoto, and throughout the movie's running time you keep wondering: when? When will this guy blow up? And what will happen when he does?

Other standouts are of course Denden as the totally deranged Murata, Asuka Kurosawa as the equally disturbed Aiko, Megumi Kagurazaka as Shamoto's wife Taeko, and Megumi Kagurazaka's breasts.
If that last remark seems uncalled for or pretty unfriendly to women in itself, well... wait until you've seen the film. Megumi Kagurazaka has a pretty spectacular build and Sono makes a centerpiece of her chest in several scenes.

At over 140 minutes "Cold Fish" cannot be considered a short film, but every time you are about to get bored something happens to get things slightly more over-the-top than they were before. One of the film's strongest points is the way it uses escalation to keep the audience's attention.
And I would like to single out the use of gore here. The effects-work is from Nishimura who is also known of course as the director of several splattergore films like "Tokyo Gore Police" and "Helldriver". But while the gore in those films is done for fun and completely unrealistic, for "Cold Fish" he created several very impressive setpieces which are far beyond what any squeemish people will be able to deal with. It starts of pretty slow with most of the grue being implied rather than shown during the first half, but rest assured it doesn't stay that way.

All in all Sono Shion has created another movie that hits several spots in rather extreme ways, and he proves to be someone who is at the very least interesting to keep following. If only this time it didn't leave such a bad taste...

What could have been one of the best and most disturbing thrillers of the year gets somewhat spoiled by a potentially vile subtext and a very mean-spirited finale where the film totally lost me.

Audiences in Rotterdam liked it a whole lot more than me though, granting "Cold Fish" a 3.9 out of 5. On a technical level I wholeheartedly agree.