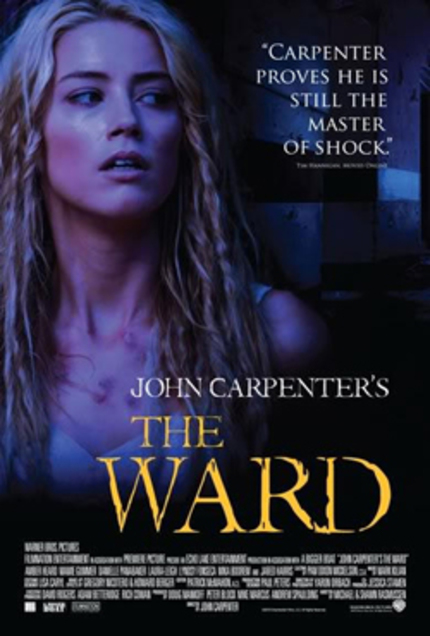 John Carpenter is back with his first feature film in ten years.  That last one was Ghosts of Mars, which was critically destroyed and failed miserably at the box office.  That film had a really fun and interesting cast that just weren't enough to save it from its own bad script and poor production.  Between then and now, Carpenter has only managed to produce a couple of films for other filmmakers and make a couple of short subjects for Mick Garris' Masters of Horror series.  Funnily enough, his first Masters of Horror film, Cigarette Burns, was among the best of the series, and probably the best thing he'd made in ten years when it was released in 2005.  It was this look at madness that gave me hope going into The Ward.  I went in with tempered expectations, hoping for the best.  Was I rewarded?  Read on...

The Ward is the story of Kristen.  We meet her running through the woods, at first we aren't sure if she's running away from something or towards something.  Shortly it becomes clear that she has a goal: to torch a farmhouse.  We aren't quite sure why, but she does, and the act of arson lands her in a mental institution.  Why an institution and not jail?  Who knows.  Anyway, once she arrives in her new home, she finds herself in a strangely private ward with only a few other girls who don't really seem particularly crazy either.

No sooner do we start getting to know these girls than they start dropping like flies.  There is only the smallest amount of mystery surrounding these killings, as the entity taking them out is revealed far too quickly.  There is a supernatural element to the murders that really takes a lot of the tension out of the story.  Can Kristen and her ward mates escape the ward before it is too late?  Unfortunately, by the end we really don't care.

There is so much wrong with this film.  The script is sloppy at best and laughable at worst.  There is absolutely no tension, every act of violence and supernatural evil is telegraphed far in advance.  There are numerous hints at the films ultimate solution every fifteen seconds, and none of them are terribly subtle.  Even the wardrobe is bad.

The problems with The Ward are myriad and really very damning.  The characters do not develop at all, they are all essentially the same from the first frame to their last.  There are very strange continuity problems, such as the fact that even as these girls disappear one by one, none of the orderlies or medical staff seem to notice or care, even when Kristen rants vociferously at her doctor regarding the ghost in the hallway.  The doctor does not seem the least bit shaken or moved by Kristen's obvious paranoia, choosing instead to sedate her.  Another bizarre issue is that each of the characters has their own wardrobe, even though (a) they are institutionalized and people like that generally don't spend much time at Macy's, and (b) we see their cells and there is nowhere to store any personal belongings.  Those are just the superficial problems, the real issues go much deeper.

At no point in this film does Kristen elicit a sympathetic reaction from the audience.  She spends the entire movie either running or ranting.  She is an extremely flat character for whom I had absolutely no feeling, and her compatriots are even less dimensional.  No one really cares what happens to her.  She never shows weakness, how are we supposed to feel empathy for her if she never shows a crack?  That is a big problem.  She doesn't need to be a shrinking violet to be empathetic, but a tiny shred of humanity would go a long way.  It got to the point that when Kristen is ultimately running for her life, a good half of the theater was laughing openly.  I wasn't one of those people, but I really can't say that I blame them.

Those who've seen the film might be able to shoot my criticisms down as symptomatic of the films conclusion.  That is, that the actions of the characters fall in line with the reveal at the finale of the film, but that is an incredibly sloppy explanation for the films shortcomings.  The outcome was not in doubt for an instant, like I said above, every move was telegraphed several minutes in advance, making the reveal not terribly revealing.  It could have been done so much better, and I'm just really sad that I feel the need to write this.

My favorite late period Carpenter film is In the Mouth of Madness, which deals with a character who is losing his mind.  Cigarette Burns also deals with characters who are mentally unbalanced.  Because of this, I thought I was pretty safe going into a film from Carpenter that featured characters in an asylum.  I was wrong.  The Ward fails on every count in which it should hit a home run.  It isn't scary.  Hell, it isn't even mildly creepy.  It is flat, unengaging, and frankly, embarrassing.

I really hope this isn't the end for Carpenter, he is an idol of mine, and I'm generally an apologist.  Hell, I even liked Ice Cube in Ghosts of Mars.  This is just bad, though, and makes me long for a Carpenter that I fear just isn't there anymore. We see glimpses of his former greatness in stuff like Cigarette Burns, so I truly believe it is still in there.  However, I am truly saddened that this is all we have to look to after ten years of waiting for a great comeback film.

More about The Ward

Yikes and this review coming from a fan of the director! Steering clear of this one...

I liked his "Vampires" movie, didn't love it, but I think there was some old school carpenter feel to it.