IN LOVE WITH THE DEAD (Danny Pang) Review 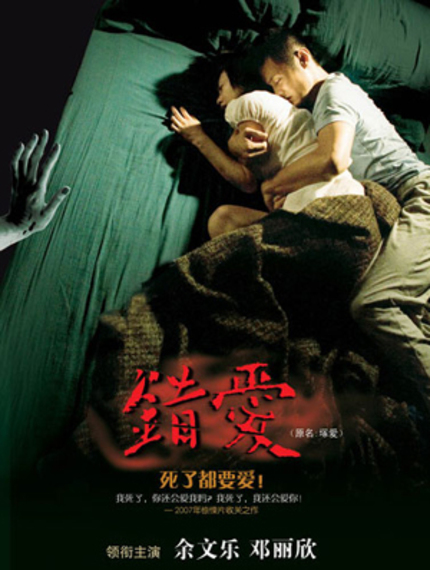 No matter what the Pangs seem to be doing these days, they can't seem to shake off the horror influences that made them popular. Some people believe this is a disadvantage, at the same time they keep on producing interesting genre blends boasting some unique flavors. Accidentally that's a perfect summary for Danny Pang's In Love With The Dead, a film mixing drama and horror to create a stylish cocktail.

I've always been more of an Oxide Pang (The Detective, Som And Bank, Basic Love) fan. The combo work of the Pang Brothers (Storm Warriors, The Eye) is pretty fine too, sadly Danny's stand-alone films never really spoke to me. Until he made Seven 2 One that is. From that point on I somewhat regained my trust in his skills, which made me leap back to this film. It was time he proved his worth.

In Love With The Dead is essentially a drama about the strains a near-lethal illness puts upon a young couple. When Wai is diagnosed with cancer her relationship with Ming takes a serious blow and even though the both of them manage at first, Ming is slowly driven into the arms of another woman. Ming finds it hard to build up a life with someone that might not be around, especially when Wai seems to be pushing him away in some desperate attempt to be sober.

While not really a horror film In Love With The Dead does boast a dark and tense atmosphere in the first part of the film, which switches into more gripping and direct paranoia during the second part. There's little in the way of gore or scares, but the heavy weight of the atmosphere does push it into horror territory. The more Ming is torn apart between the two women, the stranger his life becomes. Just don't go in expecting a typical horror film, you'll be disappointed.

In Love With The Dead is visually stylish. Meticulously accurate camera work and atmospheric use of darkness create a feeling of unease that runs throughout the whole film. The film does use more direct ways to convey its horror elements later on, but on atmosphere alone it still would've qualified as a horror film. All in all, In Love With The Dead is a delight to look at.

The score is equally haunting. Low hums and subtle, dark soundscapes create an eerie carpet of noise, wrapping the whole film in subtle uneasiness. Coupled with the harrowing visuals there's quality enough to carry the whole film on atmosphere alone. This is how soundtracks should be.

No complaints about the acting either. I love the way Shawn Yue carries his roles with deceptive ease, the two female leads put in some decent performances too. All three actors feed well of each other's efforts, leading up to a tight triangle with a decently gripping finale. Good choice of actors, considering the dramatic background of this film. The usual horror fodder just wouldn't cut it here.

Even though the direction pulls the film into horror territory the drama remains surprisingly relevant the whole film through. It's not the first time Asian directors are mixing drama and horror, but Danny Pang goes a long way in finding the perfect mix. A lot of that is due to the delicate visuals and superb score, but the acting does deserve some extra credits too.

The finale is maybe a little too explanatory and the horror part of the film finally gets a face there, still it is executed with style and the ending doesn't hinder the overall experience at all. There's a little twist (of course), but nothing so shocking that it makes or breaks the film. Usually a fine line in recent horror films, but Danny avoids it pretty well.

In Love With The Dead is a neat little genre film that thrives on atmosphere, providing a solid dramatic base overlaid with dark and brooding sentiments. The story is rather simple but works perfectly well considering what the film is aiming for. Danny Pang proves himself a worthy addition to his brother, complementing Oxide's oeuvre with a likewise yet individual range of films.

In Love with the Dead

Do you feel this content is inappropriate or infringes upon your rights? Click here to report it, or see our DMCA policy.
Danny PangThomas PangShawn YueStephy TangYung Yung YuWing Lim ChoHorror