IFFR 2011: An interview with NOBORU IGUCHI 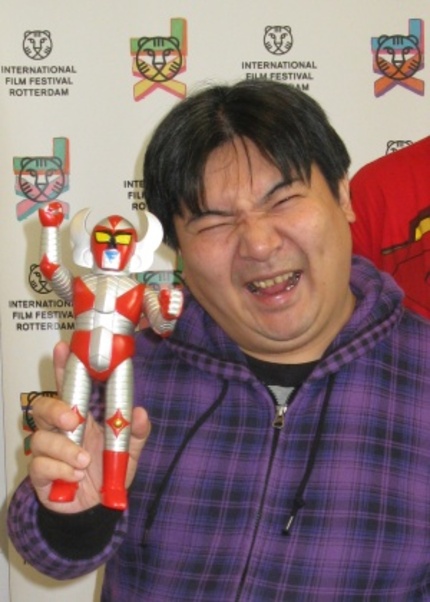 This year the International Film Festival Rotterdam hosted the World Premiere of "Karate-Robo Zaborgar" and, as I detailed in my review (link), it sure was a crowdpleaser. One day later I spoke with director Noboru Iguchi for whom this film seems to be a departure from his gorier and / or raunchier output.

Also present at the interview was Marc Walkow (of New York Asian Film Festival fame) who was accompanying Mr. Iguchi on his trip to the Netherlands, even going so far as to assist him in the hilarious Question-&-Answer session following the premiere.


AV: When "Machine Girl" was released back in 2007 you basically started a new genre of super-gory movies, and both you and Yoshihiro Nishimura have successfully followed that up with titles like "Tokyo Gore Police", "Vampire Girl vs. Frankenstein Girl" and "Robogeisha". Compared to those "Karate-Robo Zaborgar" seems like a step-out.

Noboru Iguchi: Thank you, you're too kind! But in fact very bloody films already existed. What was new about "Machine Girl" was that we merged the gore with a funny action film, and we took it further from there in our later films.


AV: So what made you choose to do a film based on an old television series? 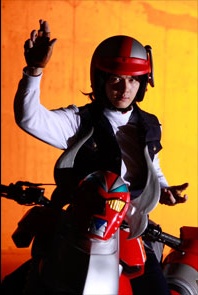 Noboru Iguchi: I chose "Karate-Robo Zaborgar" because I still remembered it from my childhood. The image of a motorcycle with a face on it stuck with me more than anything from other television series which aired in Japan in the seventies.
And over the years of working in the movie industry I came to know the producer of the original series, by chance. When we started talking the idea for this movie just came up, and we decided to try it and see if we could do it as successfully as "Machine Girl".


AV: At ScreenAnarchy we have very fond memories of "Machine Girl" of course, because when we hosted the trailer we got our first huge spike in traffic. Maybe the biggest we've ever had.

Marc Walkow: Wasn't that "Robogeisha" though?

AV: Ehm... good call: the "Robogeisha" trailer probably caused an even bigger spike, but with "Machine Girl" it was the first time we saw a trailer get popular to that extent. So we are always happy to host these trailers as they are such huge hits.

Noboru Iguchi: Nishimura and I always had much success with these films internationally at festivals, but it's only with the past few that we have developed an audience within Japan as well.
In part this is caused because things like ninja and geisha are actually not that popular in Japan. It's mostly foreigners who really go for that.


AV: I can imagine it's the same here in The Netherlands. Tourists are obsessed with the wooden shoes, windmills and tulips, but the Dutch themselves couldn't care less.

Noboru Iguchi: I haven't walked on those wooden shoes yet, but people have been trying to sell me souvenirs and cards with windmills and tulips! But yes, it's the same in Japan. It wasn't until recently that Nishimura and I managed to successfully develop a local market.


AV: Speaking of The Netherlands, why did you choose the International Film Festival Rotterdam for "Karate-Robo Zaborgar" to have its world-premiere?

Noboru Iguchi: Several reasons, although the easiest would be that they were the only ones willing to have us! [we all laugh].

Timing is important, of course. When we were applying Zaborgar for festivals around the world we didn't have a finished version yet so all we could send in was an unfinished workprint. Most programmers refuse to accept that, and the Sundance Festival for instance never even replied back to Nikkatsu.

But to our surprise the IFFR contacted us and they were very positive. We were told that Zaborgar was welcome provided we could finish the film in time for the festival.
I was very happy with that news. The International Film Festival Rotterdam has had quite a reputation in Japan for decades, and ever since I was a kid I had heard about it. It is considered a very prestigious festival. When we got the message from Rotterdam we were elated, and we all worked very hard on the post-production to get the film finished on time.
You were truly the first audience to see it in its finished form.


AV: I noticed that one of the evil cyborgs working for Sigma, the one who looks like a pirate, had two Dutch flags painted on his cheeks. What was that all about?

Noboru Iguchi: That guy was already in the original series. If you look at the closing credits of "Karate-Robo Zaborgar", all the footage you see spliced in is actually from the original series. For instance you can see that the original Zaborgar had a larger head than ours. You can also see that the pirate cyborg is in those clips as well. The general idea was that Sigma had a whole group of special agents, and each would be linked to a specific country or region. He is the Dutch one.


AV: It looked fitting, the premiere being in Rotterdam and all. What did you think of the premiere? Were you nervous? 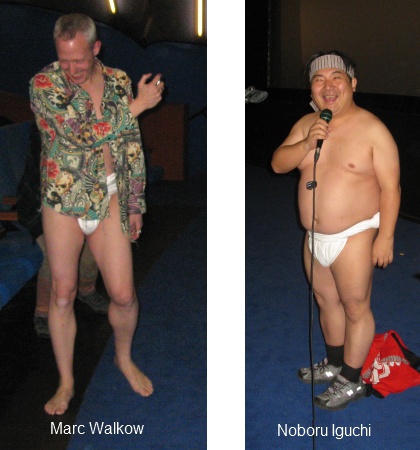 Noboru Iguchi: I was very nervous, also because I was going to do the Q&A by myself dressed only in a fundoshi [a traditional Japanese loincloth] .
Normally Nishimura and I do that together, but this time I was alone.


AV: Well, you weren't REALLY alone. Marc was there with you, dressed the same way.

Stefanie Kolk: [to Marc Walkow] YOU were in a fundoshi?

AV: And I have the pictures to prove it!

Noboru Iguchi: But for some reason it wasn't stressful to stand undressed in front of a Dutch audience. Everyone just reacted great! 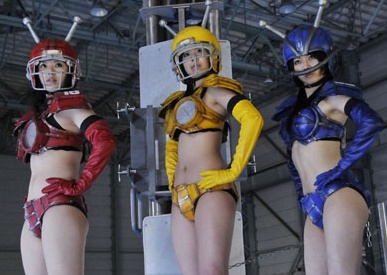 Noboru Iguchi: [beaming] Yes, well, some parts of me cannot be contained!
And there will be an extended version in Japan, a "Director's Cut", which will have more gore in it and a sex scene between Daimon and Miss Borg.


AV: Still, the current version is far more family-friendly (for lack of a better word) than your earlier output. Are you saying goodbye to those kind of movies?

Noboru Iguchi: No. I like doing those films so this is not a farewell to that genre for me.

But I am interested in doing something else as well. I'd love to make very different kinds of films, from different genres. I want to try everything at least once.


AV: Everything? Even a romantic comedy?

Noboru Iguchi: Hahaha, definitely! Actually I am a big fan of the Farrelly brothers and would really like to try making their kind of movie.


AV: So what will you be doing next?

Noboru Iguchi: We are doing some post-production on it but "Tomie: Unlimited" is basically finished. It will be released in Golden Week [April 29th - May 5th].
And I also am working on two new movies.

One will be a historical costume movie called "Shogun Girls". It will be about this evil shogun who tortures women for fun. Expect lots of Seppuku, like...
[re-enacts a seppuku, complete with sound effects] ...that, and lots of torture of course!

The other movie that I'm working on will be a zombie movie. The catch is that the zombies have teeth in their ehm... backsides and use their asses to bite people! 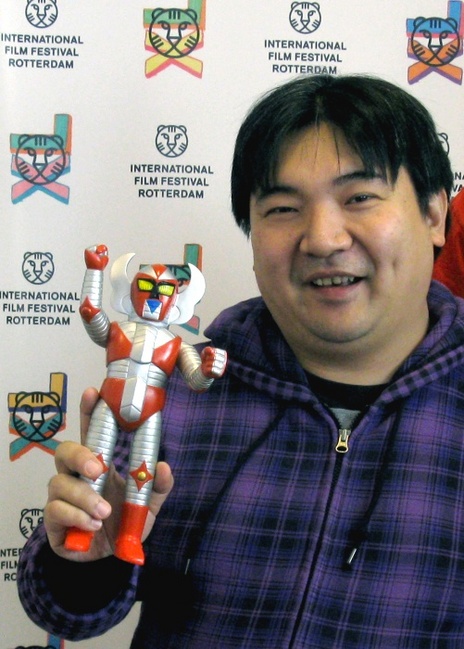 And that was all we had time for, unfortunately.

A special thanks to translator Stefanie Kolk, without whom I would have had to trust fully on what Marc Walkow was telling me. It was the first time she had to assist in an interview so I hope we didn't scare her.


And another special thanks to Marc Walkow for being cool and for taking the two portraits of Noboru Iguchi bookending this article.