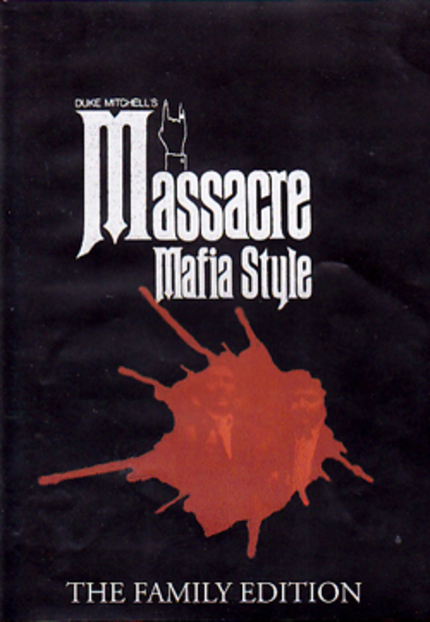 Most people who know of Massacre Mafia Style, the epic underground low-budget gangster film from all-around entertainer Duke Mitchell, from its frenetically paced trailer, shown below.  Those of us who make it a practice to seek out these exploitation styled gems know that the film rarely lives up to the trailer.  Is Massacre Mafia Style another such manipulation?  How can a film possibly live up to a trailer this outstanding?  Read on...

While not necessary, it is helpful to have an understanding of Duke Mitchell as a person and an entertainer to fully appreciate Massacre Mafia Style.  Duke was a lounge singer, and a damned good one.  He was friends with Sinatra, he was Mr. Palm Springs, and in the 50's he was part of a Martin & Dean styled comedy team that starred in Bela Lugosi Meets a Brooklyn Gorilla.  He was also a proud Italian-American, and it came through in his work.  Massacre Mafia Style was actually Mitchell's second attempt at writing, producing, directing, and starring in his own films.  Gone With the Pope was the first, but it remained unfinished until 2009, when Oscar winning editor and founder of Grindhouse Releasing, Bob Murawski got a hold of it and released it in a touring print through his company.  Massacre Mafia Style was his second and final feature, and, I believe, by far the better of the two.

The film is the story of Dominic "Mimi" Miceli (Duke Mitchell's birth name), the son of an exiled mafia kingpin, who travels from Italy where he is in exile with his father, to Los Angeles to start up the family business again.  Mimi is a take no prisoners kinda guy, he finds a childhood friend who was also a member of his father's family, and they get to work doing the town.  The film is absolutely full of what seems like stereotypical Italian "goomba" behavior, but the whole thing has a very true ring to it.  In his first attempt to get the attention of the local crime bosses from church on Sunday, he kidnaps the local capo, an old underling of his father's, and holds him for ransom.  He announces his demands via a pinky in a box, in a scene that will bring to mind either the toe in The Big Lebowski or the turd in a box from Pink Flamingos, take your pick.  It works, Mimi gets his ransom and big crime boss is released in time to attend his son's wedding.  Who shows up to the wedding but Mimi and his best pal Jolly, apparently they rolled in on their balls of steel, and set up shop at the family table to talk business.

This is how Mimi operates, he sees what he wants, and he takes it, or at the very least, he makes sure no one else can have it.  Eventually he treads a little bit too heavily on the toes of the other bosses in town and they attempt to call in a hit, at which point Mimi and Jolly go apeshit.  They find out that a hit is in, and they don't bother finding out who placed it, they just go around killing anyone they think might be involved.  Again, that is how Mimi rolls, shoot first, ask questions later.

Duke Mitchell had no idea that he was making an exploitation film.  You can tell that this film, while violent and ugly, was made with his blood, sweat, and tears.  Mitchell wanted this film to be epic, and while it may fall slightly short of that, it never, not for a second, fails to be entertaining and it overcomes its handicaps in spades.  You can tell that many of the people in the film are not actors, it is perfectly obvious.  I won't tell you that it lends any kind of realism to the film.  Their performances are stilted and most line readings feel like first takes.  However, like I mentioned above, it isn't a film about them.  Duke Mitchell could have been acting opposite cardboard cutouts and this film would have worked.  There is love here, it is in every frame.  Duke made damned sure that HIS film was done HIS way, from the script, to the direction, to the soundtrack which is filled with his songs.

At the outset of this review I asked if this film would suffer the fate of so many exploitation films and fall short of the expectations built from the trailer.  The answer is a resounding no.  Massacre Mafia Style is the rare film that is better than its trailer, and at a lean 79 minutes, it never lets up.  There is no filler, in this film, it is all killer.

I'm not going to lie, Massacre Mafia Style is ugly on this DVD.  It has the look of an upconverted VHS tape.  This is probably exactly how it looked when it was first released back in the early eighties under the title, "The Executioner".  It is presented in a full frame, 1.33:1 aspect ratio, though I understand that it was projected at 1.85:1 originally, and zooming in on the image with my Blu-ray player leads me to believe that was true.  It crops to 1.85 beautifully.  The audio is similarly unremarkable.  It is presented in mono, which I'm sure was its initial theatrical appearance, and has an unstable sound, but the dialogue is clear, and the over the top sound effects are present as well, so no harm no foul.  All in all, for an exploitation film, it isn't the worst I've ever seen.  There is still some charm in a dirty, scratchy print, and warped sound, and I understand that, but seeing what can be done these days with digital restoration, it is a bit shocking when we do come across something that hasn't been cleaned up.  I don't expect Massacre Mafia Style is really a candidate for that process, and so I'll take this, it is better than nothing.

Where the Massacre Mafia Style: Family Edition DVD really shines, apart from the awesome film, is in the extra features.  For a film as obscure as this, I've never seen such a packed release.  The main feature contains no less than three full-length commentary tracks.  One from Duke's son Jeffrey Mitchell, a second from Duke's longtime friend Frankie Ray, and a third from Duke's friend and longtime valet of Frank Sinatra, George Jacobs.  They aren't exactly scholarly, but they each have their moments, and are perhaps worth listening to once.  Also present on the first disc is that legendary trailer, presented in higher quality, presumably from a film reel rather than VHS.  The trailer is great, you can check it out below.

The wealth of extras continues on disc two.  The most impressive is an hour long documentary following the lives of Duke and his son Jeffrey.  For the many of us who are young, or weren't aware of Duke Mitchell's fame and/or notoriety, this is a great way to find out.  Jeffrey narrates much of the doc, adding in interviews from the above commentators and tons of great anecdotes from both his life and his father's.  Duke was not a gentle man, and he didn't take shit from anyone, so you get the feeling that Massacre Mafia Style was a sort of fictionalized autobiography, which makes it even more entertaining, if that is possible.  Also included on the second disc are extended interviews with Frankie Ray and George Jacobs.  These interviews are hilarious, with Frankie and George going into numerous anecdotes about Duke, Sinatra, Lenny Bruce, and others that are really great stories.  I definitely recommend checking them out.  Rounding out the features are first a massive photo and audio gallery with photos from Duke's personal collection from Massacre Mafia Style and beyond and featuring a few of Jeffrey Mitchell's songs from the 70's when he was a working musician in the UK, also there is an audio recording from one of Duke's final live performances.  Good stuff, but nowhere near as good as the film itself or the documentary included on the disc.

Massacre Mafia Style is a great forgotten gem.  As of right now, it is only available legally through the official website.  The Family Edition is well-worth the $30 it costs, and normally I wouldn't pay that kind of price for a film, but this one is outstanding and a real winner.

Wait WHAT? This is out on DVD? I've been waiting forever for this release and I thought Grindhouse was going to release it, they had the trailer on their discs for ages.
I wonder how Duke Mitchell approved this release, like they say on their site, since he's been dead for decades.

This is an amazing disc.

Now, can someone please release GONE WITH THE POPE on DVD/BD already?!