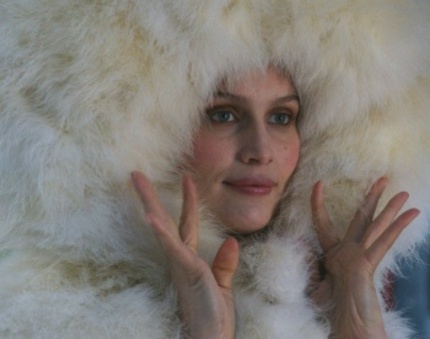 A Taiwanese director visits The Louvre to make a film. Uniquely, for "Visage" that sentence doubles as both a plot summary AND as a description of what happened for real behind the scenes, without the film being a documentary...

This year at the International Film Festival Rotterdam ScreenAnarchy got the opportunity to interview the great Malaysian / Taiwanese director Tsai ming-Liang. He was visiting The Netherlands to promote and explain his (then) new feature "Visage" aka. "Face".
That interview will be published soon and for that occasion we've held the review of the film until now.

So what's it about? Read on!

The famous Taiwanese director Kang visits Paris to shoot a film adaptation of "Salomé" in The Louvre. The whole film drifts around that central topic, showing the beauty of the locations and the actors captured by the camera but also an assortment of problems with the shoot itself, Kang's private life, the logistics of The Louvre and the VERY reluctant aging star who is hired to play King Herod.

How much story do you actually need with your eyecandy?
When watching "Visage" it is a valid question, as this is without a doubt Tsai Ming-Liang's most unapologetically self-indulgent feature film yet.

And no wonder: commissioned by the famous Parisian museum The Louvre as a celebratory art piece for their collection, Tsai Ming-Liang was under no pressure to make "Visage" a commercially successful film. Instead he made a collage of all things he himself thought of as interesting: his own films, art, the beauty of the nude human body, Lee Kang-Sheng, Truffaut, faces old and young, dance, Lee Kang-Sheng, The Louvre itself, Lee Kang-Sheng... you name it!

Tsai Ming-Liang himself has gone on record saying that he sees this movie more as an art-installation than as a filmed narrative, with the fractured barely-existing plot being completely intentional. Like a trip to an actual museum viewers are encouraged to pick the bits they like and later investigate the original artworks on which those scenes are based.

As in his other movies long, lingering shots are used, making the film seem like a still collection at times. We are treated to minutes of Laetitia Casta taping a small window shut, meandering conversations between people who hardly understand each other's languages, a kitchen-sink malfunction that is straight out of a nightmare, people trying to navigate The Louvre's immense catacombs, a non-cooperative deer, Lee Kang-Sheng being doused with tomato-sauce while freezing in a bathtub surrounded by naked dancers...

So your enjoyment of this film hinges quite a lot on sharing these interests with Tsai Ming-Liang. Because if you do not, this is a very inaccessible piece of art indeed.
Woe is the viewer who goes into "Visage" just to see Laetitia Casta naked!

But on the plus side, it all looks meticulously compositioned and gorgeously shot. And the personal nature of the film does give it an overal consistent atmosphere, so while there is hardly a plot to follow the film never degenerates into a jumble of random shots either. Especially the film-within-a-film scenes are luscious and gaudy, and often stunning enough to make me wish Tsai Ming-Liang had actually made a whole "Salome" film as a straight narrative instead of just a few parts of it.

All this makes "Visage" a difficult film to review. Definitely an "artfilm" in the literal sense of the word, it shows Tsai Ming-Liang's views on personal loneliness, the cruel passage of time, the beauty of art and people and the passing of both. I was enthralled by parts of it, disgusted by some of it, and bored by sections of it. One scene made the whole movie worth sitting through, and one scene managed to make me physically nauseous.

And I cannot shake the feeling this was exactly as Tsai Ming-Liang intended it.

"Visage" is a strange and unique movie. Fans of Tsai Ming-Liang will have a field day recognizing nods to his earlier films, other people will be puzzled by the fractured narrative which is very thin to begin with. At times the visuals and compositions are gorgeous but it's hard to resonate emotionally to a movie which is so personal, so kept close to its own creator.

Slow, ponderous and often bewildering, it's hard to recommend "Visage" to people other than seasoned film students or Tsai Ming-Liang followers. Having said that, the film is a feast if you belong in either of those two categories...

Nevertheless the film was quite well-received in Rotterdam: at the IFFR 2010, audiences gave "Visage" a 3.25 out of 5.
Sign-In to Vote
Tweet Post Submit