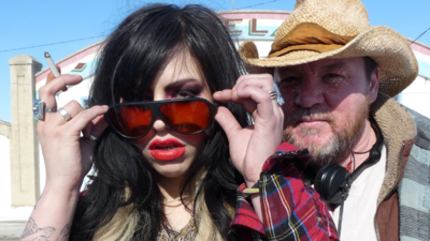 More than a decade after filming the final reunion tour of legendary (and fictional) Canadian punk band Hard Core Logo, filmmaker Bruce McDonald (again played with remarkable authenticity by... Bruce McDonald) remains disturbed by the swift and ugly death of the band's volatile lead singer, Joe Dick (Hugh Dillon in his first film role).  When McDonald's vastly lucrative Hollywood career (as with the first Hard Core Logo, we're clearly in an alternate universe) takes a sudden dive, he can no longer contain his inquietude.  It is then that the singer of punk band Die Mannequin, Care Failure (played wildly over the top and/or or dead straight by... yes, Care Failure of Die Mannequin) claims to be possessed by the spirit of Joe Dick, and McDonald sallies forth with a Wiccan video artist in search of the truth; in search of peace of mind; in search of a bad hangover, and a mid-life crisis babe, and unusual wildlife.

The original Hard Core Logo is hallowed ground in Canadian cinema, boldly stylistic, darkly funny, and so unrepentantly in-your-face that many of us could hardly believe it was a Canadian film at the time: but above all, it's honest.  To call it a mockumentary is a misleading convenience; it's really a hilarious punk tragedy with a documentary conceit.  Few films have ever galvanized my attention the way HCL did in the mid-nineties. Accordingly, this is essentially The Empire Strikes Back for my adult life.  Like Empire, I've waited a significant percentage of my life to date from original to sequel, and like Empire, the sequel is a more brooding film and leaves us sensing a vastly more complicated world.  Does Hard Core Logo II live up to the original?  Absolutely, though they're rather different films.  If the original HCL is an amphetamine-fueled street fighter trying to punch through your face to get to your brain, HCL II is a self-effacing, philosophical assassin, humbly and genially clowning around in front of you for your pleasure, and deftly screwing on the silencer when you turn your back.  McDonald gets great effect using personal footage and facts about his real family to counterweight the comical absurdities of his fictional self.  Die Mannequin's tunes keep the adrenaline pumping, and like Dillon, Failure has a furious presence.  The edit is razor sharp.  David Griffith and McDonald's screenplay meshes beautifully with the original film while still accomplishing something completely different. If there's one more HCL film out there in the ether to make it a trilogy, I'll be thrilled again. Hell, if McDonald makes a prequel trilogy, I'll probably love those, too.