"She starred in Thirst" Actresses Review 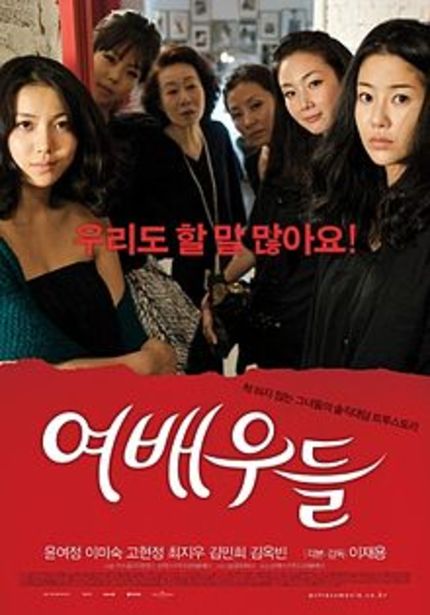 A plethora of different personas pervade the mockumentary dramedy effort that is Actresses. These are real people with notable inflations to their ego and the generation gap that persists between their varying degrees in age and experience. All of the actresses have come together for a Vogue Christmas fashion shoot; a seemingly simple exercise but underneath boils a complicated emotional and personal war that often spills out to the open in the form of subtle catty attacks to full blown physical assaults that are both equally hilarious and petty.

There is a lot of cultural sensitivity as each actress is slowly introduced. Some are professional and early on the set, perhaps too early and others whine, mope and are very late to the set. The losing face aspect of Asian culture is given some interesting commentary and is openly made harmless fun of. A younger international starlet is met by a bevy of Japanese fans and she speaks poor Japanese to them and signs autographs. Another actress is paranoid and insecure. Te satire of celebrity is kept in check by the brilliant performances of these women and their subtle quiet desperation often provides the most laughs.

When they finally gather together in the green room it is a fascinating display of different body language, respect, admiration and sarcasm. The staff at Vogue have a very difficult task keeping these egos in check, Ok-Bin Kim from Thirst is the newcomer; a black sheep that tries to please the others, particularly the veterans as she sits away from the group, and uses less obvious attention seeking methods that some of the other vain actresses do.

There is a lot of one-upping as they compare their lives and the things they have. Particularly when a personal masseuse is introduced and the international starlet speaks to him in French and English. Jealousy is constantly overcast in every scene, and each actress is initially dubious until they receive the massages themselves. This is one moment of many in the film where regardless of ego or circumstance, they all come together and bond, only to break up again in a very fleeting manner.

Actresses works as each character is given critical insight in group scenarios but also in an intimate one on one interview with the camera. These are very insightful and real moments and their commentary of the live they live is fascinating.

It also works because they are forced to be together, even when they begin to get on each others nerves, because of the dues ex machine of a snow storm, as they are waiting for the gems that are being flown in to use in an integral part of the final photo shoot.

Throughout the film there are different types of photo shoots, some individual and some group, mostly fake and insincere showing off the fashion and the ego. It was a masterful touch to put all of these actresses through an emotional experience both internally and pitted against each other.

After a very long and insightful dinner conversation where insecurities build and they gossip, the barriers are broken down and each of them becomes very real; no longer hiding behind their ego.

The candid final scene is a real photo shoot where they come together as a genuine collective.

Actresses is a very unique character piece and quite meta as it genuinely looks at the profession and the culture in . It looks at the real people who surely must have grown from this experience together; both as actresses who play themselves and themselves as people.