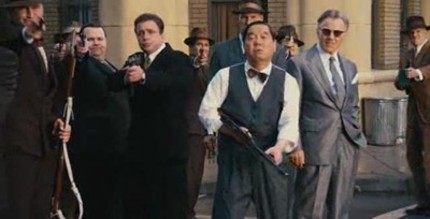 I'm not sure what's more surprising here: That Dragons Wars director Hyung-Rae Shim has followed up his special effects spectacle with a slice of nostalgic slapstick comedy, that he somehow managed to cast Harvey Keitel in it, that Keitel is playing his own father, or that it looks very, very funny. Because all of these things are true. Here's the story.

Before striking out as a director Shim made his name as a television comedian in Korea, the peak of his fame coming in the 1980s with the creation of a clumsy, socially awkward,, not particularly bright character named Younggu. From what little I've seen I've Younggu he's kind of like Mr Bean crossed with Buster Keaton and the character has appeared in a long string of films and television shows.

Jump forward a bit. Tired of the TV comedy world Shim opted to move into directing which he appeared to be not very good at. This did not stop him from raising huge amounts of money to create Dragon Wars, the science fiction spectacle which made big bags of money despite - like Shim's earlier work - not being very good.

And now? Now comes his follow up. The Last Godfather is a period set, American set, gangster comedy in which Harvey Keitel plays a mob boss who wishes to retire and leave the operation of his crime family to the illegitimate son he has kept hidden for years. That son? Younggu.

Yeah, it's a goofy premise but bear with it. Because the first trailer has come out and it looks very, very good. The production values are high, the American cast looks strong and Shim himself looks like something lifted straight out of a peak era Zucker Brothers production. Maybe it's just that I had zero expectations for this but I really, really like what I'm seeing so far. Check the trailer below.