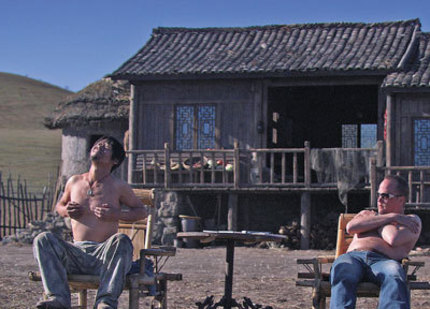 Mao Yan plays Mao, drunken and obtuse owner of a ramshackle inn somewhere in the grasslands of Inner Mongolia, and Thomas Rohdewald plays Thomas, an ignorant foreigner whose trek lands him at Mao's crumbling home by a lake.  (To create the lake in a landscape now suffering desertification, the production would dam a tiny river every morning, and herdsmen downstream would come and destroy their dam every night.)  Our delight in their inability to communicate accurately with one another is only enhanced by Wen's ability to find parallels to the relationship: a pair of randy dogs; an elegant classical sword fight between embodiments of yin and yang; and... aliens and unseasonal snow fall?  The director acts on his impulses, and while they can be baffling, they're both purposeful and delightful.  Wen's light touch and sensitivity to his subject matter benefit from well considered camera moves and a clear vision of his dream world.

To weld the odd-couple tale that makes up the main body of the film to the real relationship between the two friends, there is a brief final chapter in which Mao and Thomas actually play themselves.  To keep the parallels to the body of the film (Wen describes the film as two parts - a building and its reflection in water) Mao's studio is being visited by a friend from the village he grew up in - a man named Doggie who is only right when he is drinking.  Doggie echoes not only the dogs of the first part, he also claims to be an alien, and insists that Mao is prejudiced against aliens, protesting that "aliens are people too!" eventually prompting Mao Yan to chase him with a fire extinguisher.  (Naturally, to play a drunken alien named Doggie in a film about odd friends, Wen calls upon an old friend... an alcoholic writer named Doggie, who had to answer a short quiz before Wen was satisfied he was still functional enough to play the part.)

Thomas Mao is keenly enjoyable, inventive, and ultimately warm.  Here's hoping it continues to thrive outside of China.