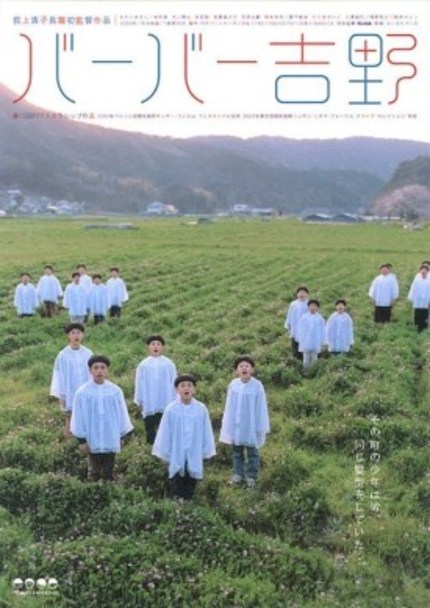 Not too long ago I watched Kamome Diner, a pleasant little film made by female director Naoko Ogigami. I was pretty taken with that film and it sparked enough interest to seek out more of her work. First in line was her feature length debut, Yoshino's Barber Shop, a sweet-looking comedy featuring the down-tempo atmosphere of the Japanese countryside. Lucky for me it proved to be every bit as good as expected.

Some directors are able dazzle you with their talent and completely screw up the next film, others produce a constant stream of quality work without ever blowing any fuses. Even though it's a little early to make a definite judgment, Ogigami seems to fall into the latter category. She doesn't really give me the impression that she can create a true masterpiece, on the other hand I won't expect to see anything less than great coming from her.

Yoshino's Barber Shop is a splendid little film. While superficially very simple and basic, it houses some interesting themes which are adequately integrated into the whole experience. The themes and moral never feel forced, nor do they ever detract from the quirky little storyline. And yet, the delivery is pretty straight and the extra layers are undeniably there. The ease with which it is all presented is quite remarkable.

The film tells about a small town hidden away in the Japanese countryside, far away from the bustling cities. A pretty regular town apart from the fact that all young boys seem to be wearing the same haircut. Apparently tradition forces them to keep a Yoshino cut until they become adults and as they don't know any better, they all comply without causing much of a fuzz. All goes well until a fresh Tokyo boy interrupts the little town's peace and starts wooing all the girls with his fancy hairdo.

On a visual level Ogigami doesn't really surprise. It's a pleasant film to look at with some nice country views and lots of green to fill the frame, but if you've seen a couple of Japanese countryside dramas like these before you'll know what to expect. It's pretty likable, but if you want something extra you won't find it here.

Even though the soundtrack is a little bolder (which some strange choices in classical music) it doesn't have a lasting appeal. It goes rather well with the visuals and creates a few funny moments, but it's not really all that unique or strong enough to really stick out. Still quite enjoyable though.

Acting on the other hand is rock solid. The gang of five does a pretty commendable job, but it's Masako Motai that truly coins her character, playing the stern and somewhat grumpy-looking mother with such a sense of humor that she quite easily carries the film all by herself, stealing every frame she's in. Extra credit for the appearance of Yoshiyuki Morishita, better known in the West under his unlucky but appropriate moniker of "Ugly Guy". Great guy, funny character.

Giving Yoshino's Barber Shop some extra stretch is a lovely though somewhat quirky sense of humor running throughout the entire film. There are a couple of strange little interludes and some genuinely funny scenes without actual jokes or direct comedy being inserted. It surely adds to the easygoing atmosphere so present in Ogigami's work.

Yoshino's Barber Shop is essentially a film about traditions, rebellion and the gap between generations. The new blood opens up the eyes of the local boys, making them question the purpose of certain traditions while at the same time Ogigami edges a little closer to the more humane aspects of traditions and customs. In particular the personal benefits that are linked to some of them, lovingly disclosing the ulterior motives of the cast.

And while all of that might sound pretty serious and even heavy-handed, it's amazing how light and flirtatious Ogigami manages to keep her debut film. Not at any point does it feel like she urges her audience to consider the deeper layers in her film, she simply puts them there in plain view, glaringly present but not at all intruding. Definitely recommended and I can't wait to see the rest of her oeuvre.

Do you feel this content is inappropriate or infringes upon your rights? Click here to report it, or see our DMCA policy.
Naoko OgigamiKazuyuki AsanoHoshi IshidaShinnosuke MiyaoMasako MotaiComedy