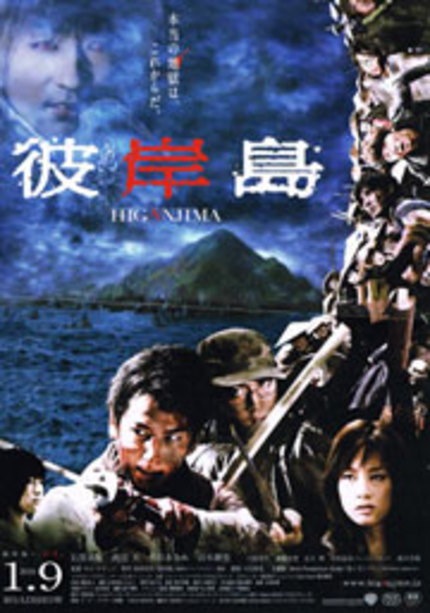 [More follow through from FanTasia! Japanese vampires are snappy dressers!]

Akira's brother, Atsushi, disappeared two years ago and his family has never recovered from the loss. When a strange woman, Rei, rescues him from a group of thugs she later claims to know Atsushi's whereabouts. Later, Akira and his friends follow Rei to a warehouse where they witness a vampire drinking the blood of a kidnapped schoolgirl. Rei kills the vampire and tells Akira that there are many more like it on the uncharted island of Higanjima where his brother is, that if Akira wants to save him he must go with her. Akira's friends cannot let their friend go at it alone so they join him. They're off to Higanjima to fight an army of vampires and rescue his brother.

Tae-gyun Kim returns to the action genre, which explains why Atsushi's rain cloak looks so damn spectacular. Remember how Kim shot them in the opening minutes of Volcano High? Those rain cloaks were epic cool! The film does start off with a promising row between Atsushi and a couple drone vampires where he destroys their heads with a portable battering ram. Alright! Here we go! Let's get on with the vampire killing... what? You're kidding? This guy in the cool cloak with the sword and the woosh woosh isn't the main character of the story? What? Who's Akira? Oh. We're going to catch up with him now? Aw man. This guy is such a pussy. Can we get back to Atsushi? Soon? Okay, I'll sit here and wait for Atsushi to show up. The action is above par but great moments are far and few in between, spending too much time with Akira and his teen issues.

No slight against Hideo Ishiguro but he's just not leading man material yet. Likely catching the role after his turn in the ever popular Gokusan television series [merely speculation as this is where I remember seeing him last] he spends the greater part of the film whining and crying. Which I suppose is the point of the film and his character's inevitable turn to confident hero. But young Japanese boys crying and whining for near the entire length of the film tests my patience. Too much Jdrama and not enough Jhorror.

Vampire mythology is thrown out the door as well or it may be that Vampirism differs by region. In Higanjima Japanese vampires can walk in sunlight and the only way to destroy them is to obliterate their head. Likely retaining the look from the manga Miyabi prances around the island on a white horse dressed like some sort of regent prince which in any context other than a manga adaptation would seem silly. If you don't know manga then you're going to wonder why Miyabi looks like he just returned from an equestrian competition. But yes, he strolls around his vampire kingdom and has Rei lure fresh meat to the island so that he may have experiments conducted in the bowels of his fortress. For he wishes to make the perfect being! Why you may ask? Uhm, they don't tell us. But it can only be for something REALLY evil. And that's what evil vampires do. They suck blood. They turn people into vampires. They pursue their dreams of creating the perfect being. This, I guess, is not him. Rather odd outlook for a vampire don't you think?

Akira's friends have nothing to do except get themselves into trouble, or dead, which I suppose serves as motivation and catalyst for Akira. There was so much promise. Ken-chan boards the boat with a bat. Never uses it. Yuki brings along her bow and arrows never to be seen again. I wish I could remember what Osamu Adachi's character name was but he at least gets to try throwing around one of his chemistry experiments but it doesn't work. They serve no real purpose other than vampire fodder. Perhaps in the sequel they'll get to do more or Akira will just leave them back on the boat so they won't get in his way.

Tae-gyun Kim's return to action cinema is not a fateful one. He does manage to offer up some entertaining scenes. He and his art direction team do make a valiant effort at making a good looking film; though it does tend to be too dark sometimes during the night scenes [Der! It's night retard!]. But there is sufficient blood letting, biting, head crushing and hacking of limbs to please mostly everyone. The real culprit is the screenplay by Tetsuya Oishi, which is surprising because he wrote the very entertaining Death Note films. But he just puts too much focus on the teen drama and not enough on the vampire action.

Good but not great. Fans of the manga will have to tell you how faithful to the orginal material the film is. The rest of us will tell you that it fulfills its purpose of entertaining popcorn horror fun flick and plays by the rules.
Sign-In to Vote
Tweet Post Submit