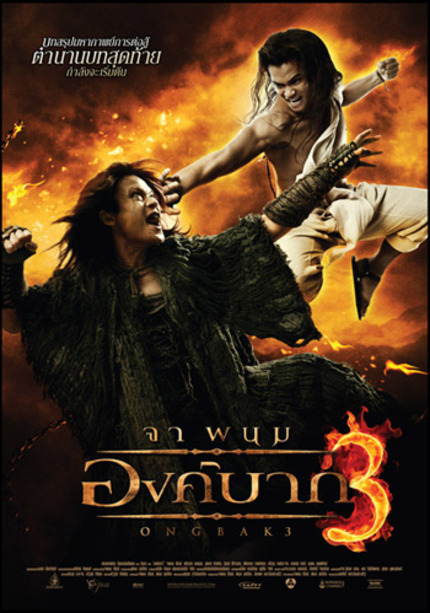 Tony Jaa has exited the film industry. We don't know for how long and can only speculate on the reasons why but yesterday - Friday, May 28 - Jaa rode an elephant to a Buddhist temple in Surin, Thailand, where he shaved his head, took vows, and was officially ordained as a Buddhist monk.

Now, this is not necessarily forever. Joining the monkhood for set periods of time is a fairly common practice in Thailand and the expectations are not that he will remain in the monastery forever. In fact, Jaa's mother has already been quoted saying she hopes her son will find a nice woman and get married once his time as a monk is complete. This does, however, completely eliminate any chance of Jaa being involved in the film industry for the time being and this, I think, is entirely the point. In fact, I actually predicted this move back in August of 2008. Here's what I think is happening:

Following the success of Ong Bak and Tom Yum Goong, Jaa insisted he be allowed to direct his next film himself - a desire largely responsible for destroying his relationship with director Prachya Pinkaew. Jaa got his way, though, and the reins of Ong Bak 2 were handed over to him. The initial footage from that film looked fantastic but it didn't take long for strange stories to emerge from the set - stories of Jaa sacrificing chickens before shooting for the day could commence - and things rapidly fell behind schedule and way over budget. And then, with pressure mounting and debts adding up, Jaa simply crumbled under the pressure and disappeared. He was gone for two solid months - during which time the wilder stories explaining his absence involved black magic in Cambodia - before his mentor Panna Rittikrai managed to track him down and bring the wayward star home. And then, believe it or not, things got even messier.

First Jaa appeared on TV, weeping and vowing to complete the film. Then he publicly issued a set of demands to production house Sahamongkol, threatening to disappear again if they were not met. Among the demands were the insistence that he be released from the long term, exclusive contract that he signed with the production house. Shortly after this Jaa was whisked away in a car full of Sahamongkol 'heavies' prompting speculation that he had been kidnapped. Not true, Jaa said when he reappeared, but whatever happened was unsettling enough to him that he took refuge in a police station, where he later met with Sahamongkol boss Sia Jiang. That meeting resulted in Jaa's demands being dropped, Jaa agreeing to split Ong Bak 2 into two movies to allow the company a chance to recover the cost over runs, the creation of a major new role for Sahamongkol's other star Dan Chupong, and directorial duties for the remaining shoot were handed over to Panna Rittikrai.

Well, the results of those shoots have both been released now. Ong Bak 2 - mostly Jaa's film - is flawed but was a success thanks to the incredible fight work. Ong Bak 3, however - assembled fast and cheap from a quickly revised script by an assembly of Sahamongkol execs and Rittikrai - became the first Jaa film to ever fail to top the Thai box office and, frankly, stinks of contractual obligation. The passion isn't there, the fire is completely gone from Jaa as a performer, he's put on weight - not to Segal levels but he's lost all of his definition - and all of the films best moments belong to the charismatic Chupong, not Jaa. With Ong Bak 3 it seems that Tony just doesn't care any more.

So here's my take on things. Jaa, clearly, meant what he said when he threatened to walk away and disappear again. My guess is Sia Jiang laid down the legal and financial consequences Jaa would face if he failed to fulfill his Ong Bak 2 contract, effectively forcing him back to work on that film, but now that that particular film is done and that particular debt is paid, Jaa has gone to where their contracts couldn't touch him. How long will he remain a monk? My guess is until one day after his original ten year exclusive contract with Sahamongkol expires.
Tweet Post Submit