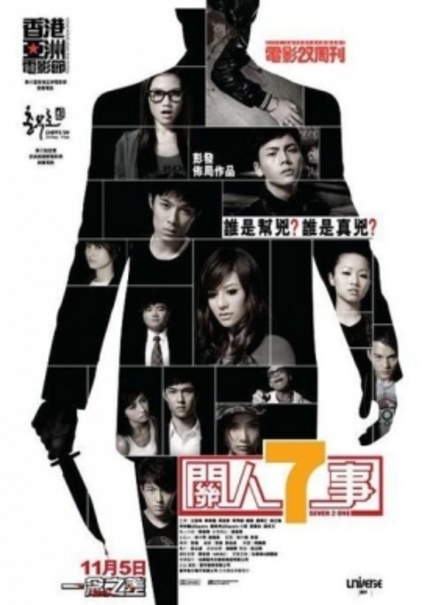 It's no secret that I'm a pretty big fan of the Pang bros. While they usually work in team, they also reserve time off for solo projects. I already reviewed The Detective and Som and Bank, two of Oxide Pang's solo projects, now it's time to let his brother receive some of the praise. The film worth praising is Seven 2 One, Danny Pang's latest solo effort.

I've always considered Danny Pang the lesser talented of the two. His solo projects never really spoke to me and the one I've actually seen (Forest of Death) was a small disappointment. Luckily I prefer stone-cold facts above prejudice so when the opportunity presented itself to watch Danny's latest I jumped at it without thinking twice. A good thing I did as there is plenty to enjoy.

Seven 2 One is one of those films centered around a single event, catching multiple angles leading up to it. Ever since Tarantino directed Pulp Fiction this has been considered rip-off material and truth be told, Seven 2 One isn't the most original of films. That said, Danny Pang does add some neat twists to the whole. He starts off with the main event, then goes on by showing various short cuts from selected scenes within the film. After that, he works his way from start to finish, often switching between characters and keeping a pretty asynchronous structure.

The main event is a robbery of a 24/7 mart, resulting in a violent stabbing incident. A good few people are involved and the film quickly retraces its steps to show you the full picture. It takes a while to get a good grip on all the main characters, but once you do the stories quickly start to tangle up and the film races towards its finale. The pacing is excellent.

I always figured Oxide Pang was the one with the most visual flair, but Danny sure knows how to plan his revenge. Seven 2 One is quite simply stunning. It's pretty unbelievable how he manages to turn the drabbest of sceneries into visually arresting scenes. Use of color is truly magnificent, as is the delicate camera work. Every new scenes is a pleasure to behold, greatly increasing the enjoyment of watching all the events unfold.

The soundtrack is nice enough, though a little underdeveloped. Films like this usually have little in the way of a good score, but some scenes did feel a little lacking because of it. It never becomes a true issue, but I'm sure a better score would've raised the overall quality by a notch. Acting is decent, especially considering that most of the actors were probably selected based more on looks than talent. Apart from the goofy guy with glasses they all do what they were paid to do without making complete fools out of themselves.

The film leaves you little time to adjust to the story. From the start it presents a pretty fragmented puzzle that slowly comes together as a whole. Clues and revelations are well spread throughout the entire running time and even though the actual outcome is not much of a surprise, the films remains engaging. There is that extra ending that feels quite out of place, but since it's just an afterthought added during the end credits it is quickly forgotten.

Above all Seven 2 One is true visual feast. Danny Pang, while showcasing a somewhat different style from his brother, proves he has his own set of skills to perfect in his solo projects. Seven 2 One is cool, hip, visually arresting and short enough to please the visually inclined movie fan. Those looking for a deep and original story will quickly discard this film as unnecessary, but that is missing the point rather bluntly.