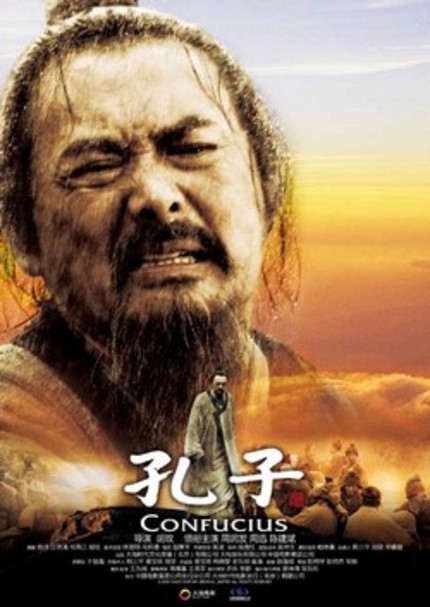 Curious that on the day the casting of Korean singer Lee Jung-Hyun (who's now bigger in China than she's ever been at home) in a new TV series about Confucius was announced, TV mainstay Hu Mei's first film in a gazillion years (well, seven) released its second, shorter trailer. The former is a $10 million CCTV production which just completed shooting, and will start airing next year - one of the two "big guns" of the Chinese broadcaster, the other being the humongously epic and star-studded 2010 version of the classic Luo Guanzhong novel, 三国 (Three Kingdoms); the latter is likely to be a much subtler, classier affair, more concerned about Confucius' legacy and place in history than on creating sensory overload with over the top warfare, like a certain heroic bloodshed aficionado-turned-popcorn historian recently did.

Then again, the same Chen Han of 赤壁 (Red Cliff) participated in the script writing process, so some parallels will be inevitable (truth to be told, Hu has such a gargantuan historical consciousness that she won't let the same kind of history-related shenanigans which hampered Red Cliff happen here). In that sense, it's interesting to see what Chen had to say about the script-writing and research process in this interview, noting that it was relatively easier than most historical subjects, because of the wealth of material regarding the Great Sage. But I'd argue that it's for that very reason that the film will go through much more severe and exacting scrutiny. Still... Hu Mei, one of the most talented directors in China, and a cast of historical drama veterans led by Chow Yun-Fat and Zhou Xun, with those visuals? Sold.

Film releases in January. If you haven't yet, take a look at the newly opened official website, and scroll to the right. That's the coolest design I've seen in a while.