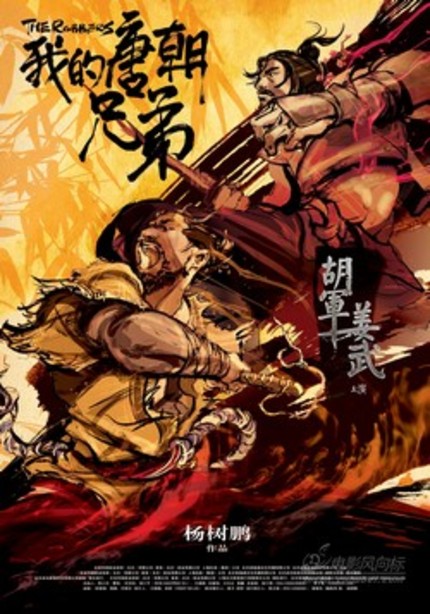 Although predictably (or, better, inevitably) replaced by Mao's legacy as the main melody-themed rush towards the 60th anniversary began in full force, for a good while the favorite piece of Chinese historiography of many a film director and TV producer was the pomp and circumstance of the Tang Dynasty, with leading lights like Li Shimin and Wu Zetian carrying the flag of such exciting and culturally abundant times's glorification. For instance, the honor of essaying Tang Taizong for a second time on CCTV-1's 2007 flagship historical drama, the fascinating 贞观长歌 (The Zhenguan Era), went to Tang Guoqiang, who made a career out of playing legendary figures like Mao Zedong - last in line in the exalted flag-waving douchebaggery of 建国大业 (The Founding of a Republic) - the Three Kingdoms' Zhuge Liang and Emperor Yongzheng of the Qing.

An irresistible mix of John Wayne-like macho posturing, sparks of unyielding youth coloring his every move and the wisdom of a great sage, Tang's Li Shimin was endearing enough that all the blood spilled on his way to greatness became more or less "excusable," a nice way of taming all the voices in the background, murmuring that the path to gain the modern version of the mandate of heaven was worthy of a few, painful sacrifices. And there's no need to introduce one of China's favorite femmes fatales, that Wu Zetian who once again extended her immortality thanks to Liu Xiaoqing playing her for a second time in 日月凌空 (The Shadows of Empress Wu), which conveniently whitewashed most of the controversy regarding her rule. So, yes, today's China loves the Tang dynasty, perhaps more so for the parallels you might concoct vis-a-vis its unifying the Middle Kingdom and becoming the dominating force of the period than for its achievements in culture and technology. You'd think that reminding people of what made the Tang fail (corrupt eunuchs, internal strife between rival clans, the secession intents of the regional fanzhen which led to the Anshi Rebellion, and peasant uprisings) would be a lot more useful than such complacent flag-waving, but it's a much too exacting request considering the times. It can only be with pleasure, then, that one can approach Yang Shupeng's distinctively irreverent Tang-themed black comedy 我的唐朝兄弟 (The Robbers).

Being politically correct (in a main-melody sense, of course) seems to be the least of Yang's concerns, seeing as he himself makes an hilariously inspired cameo in the film, essaying what is perhaps the most revered poet in all of Tang's luminous legacy, Li Bai. As he recites his classic 静夜思 (Thoughts on a Still Night) before the full moon and a duo of culturally flabbergasted thieves on the run, Li's bittersweet yet pungent prose reminds a lot more of his early, carefree days, when he thought that the national service examination was beneath a genius like him, rather than the illustrious legacy he achieved in his later days. And that is the atmosphere this film is drenched in: there is very little glory and flag-waving on display here, as the masses start as credulous, simple-minded throngs of peasants and remain so until the end, and the same happens for our titular duo, whose rare sparks of heroism are nothing more than an extension of their own, personal whims. Tang soldiers are vile, horny misfits parading about with the savoir faire of a Gestapo officer; village chiefs are more interested in maintaining their status (at the sound of age old tenets of Tang law) than protecting their fellow villagers, and as common necessity can make for a perfect bedfellow (in more ways that one), there's none of the bushido which populated many a samurai classic.

It's as if the Chinese equivalent of Mifune Toshiro's Kikuchiyo was the best those villagers could hope for, and you know where that can lead to. Admittedly, when thieves Shisun (Hu Jun) and Liu (Jiang Wu) approach the village of 苦竹林 ("Bitter Bamboo Grove." How cool is that?) in search of "water," the last thing they expect to find is a fine pair of ladies amongst all the crotchety old farts and the over-excited youngsters trying to protect the little tranquility they've been enjoying. But when the impossibly strict village chief threatens to inform Tang soldiers of their vile shenanigans, and said soldiers decide that killing a few villagers who harbored criminals on the run is a meager price to pay for those two recalcitrant masters of thievery, it's 七人の侍 (Seven Samurai) all over again. Except they're only two. And... not really samurai. But who cares, right? It's all about saving the villagers' bacon. Or maybe just the pretty girls.

Director Yang Shupeng has had quite the curious career: he majored in painting at the Sichuan Art Academy, but had a past as a fireman (!) before becoming a director. He worked a little on TV (documentaries in particular), and then debuted on the big screen with the 2007 war drama 烽火 (The Cold Flame) - about the love story between a 14-year old girl and a soldier- which was recently re-released along with this film. While his artistic background helps out immensely with composition and the overall visual aura of the film, narratively speaking his lack of experience shows on more than one occasion, as the film does have a strong thematic undercurrent (as in, no matter how nice our intentions might be, at the end of the day it's animal-like instincts which take the precedence when the shit hits the fan), but in connecting the dots he's not always the most organic of directors. What he certainly shows a talent for here is black comedy, complete with pungent satire and dialogue which transcends the physical-gag marathon this could have become. If anything, a lot of it carries quite the cultural baggage, which might make its narrative trappings a little too parochial for many a viewer unfamiliar with Tang history and how it eerily resembles many of the lights and shadows of the current regime.

But what is unquestionably the most regrettable aspect of The Robbers is that it never really seems to realize how much potential it has, both in terms of its black comedy roots and the emotional punch it could have delivered in the second half. There's nothing wrong with this film from a purely technical and narrative standpoint, but you always feel like you're using a supercar to do a lorry's job. The interplay between the thieves and the villagers is effective, but perhaps not striking enough to generate that emotional bond you will need in the second half, and the arrival of the Tang soldiers feels more like an ad-hoc deus ex machina rather than the highest peak of the dramatic crescendo which will lead towards the finale. It's a finely oiled machine offering good performances, but Yang never really seems all that interested in going past the first few gears. It's a shame, because Jiang Wu (Jiang Wen's brother) and particularly Hu Jun, in his best performance since his madly inspired turn as King Fuchai of Wu in the 2007 CCTV epic 卧薪尝胆 (The Great Revival), are excellent, surrounded by fine talent like TV mainstay Yu Xiaolei and Wang Xiao.

What The Robbers ends up being, other than the film blessed with some of the better poster design of the year, is another proof that Mainland China can do wonders with its history, particularly when the main melody canon is relegated to little more than a supporting character. What we're dealing with is without a doubt flawed filmmaking, but there's a lot more to appreciate in this quirky little film than the lazy Chinese retelling of Seven Samurai the premise would lead you to expect. Waiting for the day when even Li Shimin and Wu Zetian will have to worry about their legacy on the small and big screen, a little spice of this kind is definitely a good start...