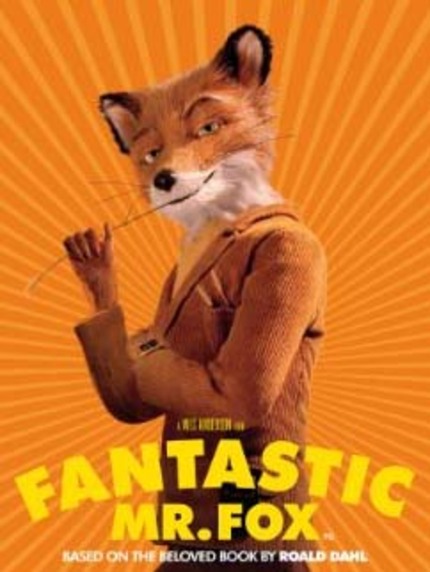 [What can I say ... there are a lot of people here with opinions on Wes Anderson's latest creation.  Our thanks to regular reader and occasional contributor Charles Webb for the following.]

Twelve years ago (fox years, that is) Mr. Fox (George Clooney) swore to Mrs. Fox (Meryl Streep) that he would give up stealing chickens and settle down on account of the little one in the Missus's belly. Flash forward to the present and Mr. Fox has his sights set on a new home and one last score in this adaptation of the Roald Dahl story by Wes Anderson. Does this stop motion animated tale work within the rarefied universe of Anderson's other works or does it just come off as stiff?

To be honest the movie just works. An astute synthesis of technique and talent brings to life what could have easily been another "bad dad" tale (Rushmore, Royal Tennebaums, The Life Aquatic) from Anderson. Anderson's output has consisted of fractured or at least damaged families in crisis with a subset of films centering on a father or father figure who's directly responsible for the turmoil of his brood.*This narrative has worked with varying degrees of success. Anderson pulls in a little closer than he has in previous films keeping his world more intimate, focusing primarily on the Foxes - the undependable patriarch, the knowing, slightly dangerous matriarch, Ash, the odd son with something to prove (Jason Schwartzman), and the exceedingly cool and calm visiting cousin Kristofferson (the director's brother, Eric). In the film's exceedingly efficient running time of 87 minutes, Anderson hits his beats with these characters and keeps moving.

But then, it is a movie about a fleet-footed thief, so what benefit would it have in being overlong and slow-paced?

The animation - please indulge my fascination with it here - is simply beautiful to look at. Perhaps part of my reaction to it is seeing something that feels positively handmade. It seems appropriate that Anderson would use this technique given the meticulousness of his story worlds. The characters possess the jerky, not quite 1:1 motion of real-world actors but it adds to the charm by never once trying to convince you it's real - only that it's a compelling reality. Most importantly it never attempts to overwhelm with spectacle, although there are spectacular moments but they are deliberate keep the movie moving instead of stopping to impress.

Having labored so much on the animation I feel guilty for not discussing the voice work. Anderson has an eye for casting which at times tends towards the usual suspects (Owen Wilson, Bill Murray, Jason Schwartzman). These names pop up in this production and each has a chance to shine but the movie absolutely belongs to Clooney who owns the character of Fox. Clooney plays the slippery lead as a fast-talker with an outsized ego. His voice work conveys a sense of satisfied resolution: this is what's going to happen because I say so. He's Danny Ocean unencumbered by the uncertainty or better still his Jack Foley with a meaner streak: he's an expert and he will not be matched.

With a lesser cast this might have been simply a mannered, pretty film but as it stands it's one that's beautiful.

*I'm cheating here a little with Rushmore given that the character of Max already has a father - but in many ways Herman is the father Max deserved and vice versa.