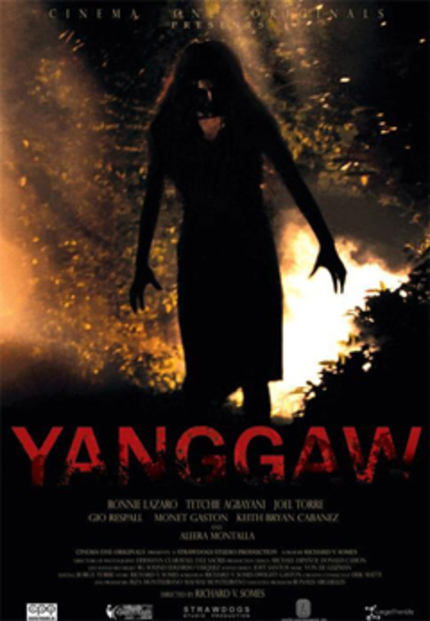 Junior lives with his wife Inday together with two of their children, a daughter-in-law and their grandson. One day, their daughter Amor returns home, after spending time in the city, with a sickness. She has been infected with venom, a Yanggaw [Yanggaw in the Ilonggo dialect is translated as 'infection'], that goes through her ears. In a few days, Amor evolves into a monster commonly called 'aswang'. She goes out at night and attacks animals first and her hunger grows for human blood.
The story is about one father's attempt to keep his family together no matter how dire the situation has become. He has been trying to make ends meet but he has no money and an infected and vampire-like daughter only complicates things further for him. Junior has to decide who and what he is willing to sacrifice to keep his family together.

Yanggaw is a depiction of rural Philippine life; it is simple yet not without its hardships. Junior wants to take care of his family but does not have the money to do so; he borrows from friends even though these friendships seem under strain and weighed down by a difficult past. His daughter's illness and transformation only compounds this hardship as none of the local hospitals and clinics have the means to attend to his daughter and going to the city costs money that he does not have. Under the guidance of a local shaman Junior and his wife are told to wait three days to see what becomes of this infection but as her condition worsens and she starts to disappear into the night the situation turns for the worse.

Aside from the melodrama of the family story it is hard to ignore that the horror elements often come out flat. For every good and solid scene in the film, mostly mood changes and set up shots, when it comes to the pay off scenes we're often left with about as much change in our pockets as Junior. We have to remember that Yanggaw is ultimately a story about a father trying to keep his family together in these extraordinary circumstances. Perhaps it is a disadvantage being an outsider looking in. Apart from this rare opportunity to see a horror film through the eyes of Filipino culture there is also absent that cultural folklore to back it up. We may have our own superstitions but we likely we haven't been told by out moms terrifying tales of Aswang to keep us home at night and out of the dark. Still, I would have liked to have seen more commitment to the Aswang scenes. It may have connected me more to the father's anguish rather than discourage me as a horror film fan.

Still, I consider a rare treat to see a Filipino horror film on the big screen, a horror film that does not play out like conventional horror films from other Asian countries.