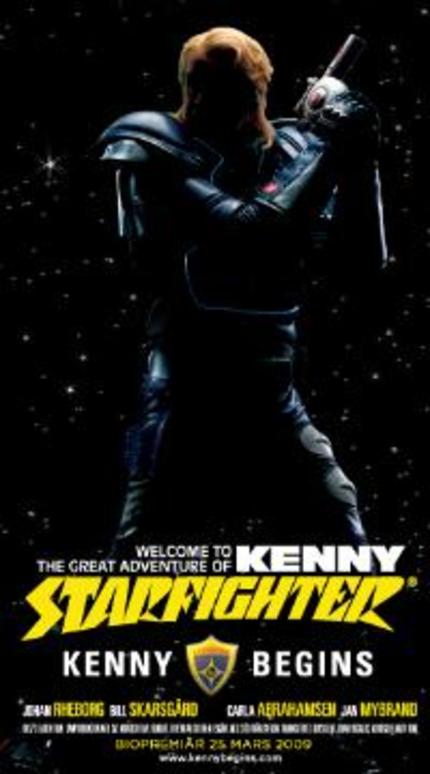 One of the things I've grown to love about Fantastic Fest is their full-hearted embrace of films that might be suitable for children. I say "might" because, frankly, who knows how demented your children are? They might be killers already, for all we know. Or they could find the sight of a man with golden flowing locks -- spouting Swedish and eating shampoo -- to be very scary indeed.

Except that Kenny Starfighter is an overgrown kid who loves to play and dreams of one day becoming a "Galactic Hero." The way he refers to it, it sounds more like an honored title than a profession that just anyone can aspire to, and Kenny has very high aspirations indeed. Until then, he is stuck as a student in the Hero Academy, desperate to graduate despite his all-too-obvious unsuitability for the role.

Why unsuitable? For one thing, he's very, very stupid, lacking both common sense and any ability to learn from his mistakes. For another, he also seems to be a huge coward, seeking the life of a Galactic Hero mostly to avoid having to follow his family into the hairdressing business, where he is certain to be overshadowed by other family members.

Kenny is such a big, goofy lug, though, that's it's impossible to get mad at him, even when he unintentionally destroys buildings and inadvertently flies into a black hole, which flings him to a small Swedish town in the modern day. Kenny is too simple-minded to be a good representative from the future of mankind, but he's the perfect new companion for Pontus (Bill Skarsgård), a teenage boy with girl problems. Pontus harbors a deep crush on his classmate Miranda (Carla Abrahamsen), who is beautiful in an other-worldly way, setting her apart from the other students, yet appears to be sufficiently down to earth to be approachable to the downtrodden Pontus.

Pontus' lot in life changes with the appearance of Kenny, which coincides with a mysterious, magical crystal. The merest touch has transformed Pontus overnight -- in a pleasant nod to Sam Raimi's Spider-Man -- into a powerful hero-type. Of course, magical crystals that can transform people into superheroes attract the bad guys, too, and Rutger Oversmart (Jan Mybrand) has a brain to match his name, even though he's out of proportion to his body.

Come to think of it, I'm not sure why I'm wasting words explaining the plot of the movie, since the main thing is that the good guys must defeat the bad guys, and that everyone will have a good, goofy time while doing so.

The first 10-15 minutes of Kenny Begins are screamingly funny. The spirit of invention flags over the length of the movie, but Johan Rheborg as Kenny never fails to elicit a giggle every time he pops up on screen, and it never becomes a drag to watch. As Todd Brown wrote in his review: "It is odd and absurd and absolutely, gloriously juvenile."

Can't say it better myself.