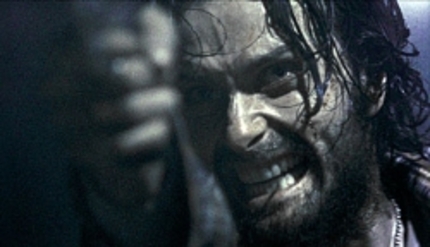 [Our thanks to Olivier D'Amour who submitted this review when the film screened at the 2009 Fantasia Festival in Montreal.]

The festival has only just started and we've already been treated to many fine films, from Thirst to Grace to Sion Sono's wonderful, unforgettable Love Exposure. Also, the Johnny Knoxville-produced The Wild and Wonderful Whites of West Virginia was a nice surprise. A documentary about the infamous White clan, family of Jesco White who made a name for himself as the "dancin' outlaw" in the early 90's. Sure, they redefine the terms "excess" and "crazy" but overall it was a funny, tender film. Dominic Murphy's fictional White Lightnin' is no generic biopic. It takes elements from Jesco's life but only as a starting point or inspiration. Instead, it goes to a very, very dark place quite fast and then spirals straight into Hell. A layered, affecting story that's basically a portrait of an outsider whose demons were always two steps ahead of him and who was painfully aware of his own weakness, even through the ravages of drugs and madness. Eventually, it becomes about his quest for redemption and peace. The pace is frantic throughout and there are welcome touches of humor and tenderness through the grime, not to mention jolts of harrowing, yet tasteful violence. In the end though, White Lighnin' is sensitive and moving instead of being cheaply exploitative or shocking.

It's hard not to think of David Lynch while watching the film. Like the director, Murphy (and co-writers Eddy Moretti and Shane Smith) knows how to distort and subvert elements of Americana and he's very successful in doing so. Moreover, he also knows how to use clichés to his advantage, to embrace them. Murphy is incredibly talented, gifted even. The images have a painterly quality to them, the framing always inventive and precise. Overall, the film is very stylish, from the sound design (and wonderful soundtrack) to its palette, in beautiful shades of gray and white, with occasional bursts of washed-out color. Nearly every shot seems to have some sort of filter or treatment, but it doesn't feel gratuitous at all. Frequently, the scenes cut to black abruptly while the omnipresent, hypnotic voice-over continues, a jarring effect that gives the impression we're being shown (by Jesco himself) a series of slides, the worn, gritty look of the film enhancing that feeling.

Edward Hogg's breakthrough (and breakneck) performance is astounding. He is not afraid to go to extremes, (literally) dancing on the edge of over-the-top, while never falling in that category. He is likeable, charming even, something that makes the unpredictability of the character even more unsettling. You won't easily forget his piercing, pale stare. Carrie Fisher (yes, THE Carrie Fisher) is also very fine in a rich, if supporting, role. While some of the religious overtones were just a little bit heavy-handed at times, the fact that he actually pulls off using "Amazing Grace" on the soundtrack near the end says a lot about his strength as a filmmaker. That particular sequence alone is worth tracking down the film, as it is arguably the most harrowing but certainly the most poignant. So poignant in fact that I ended up leaving the theater with a lump in my throat and it made White Lightnin' very hard to shake off. One of the year's best discoveries so far.