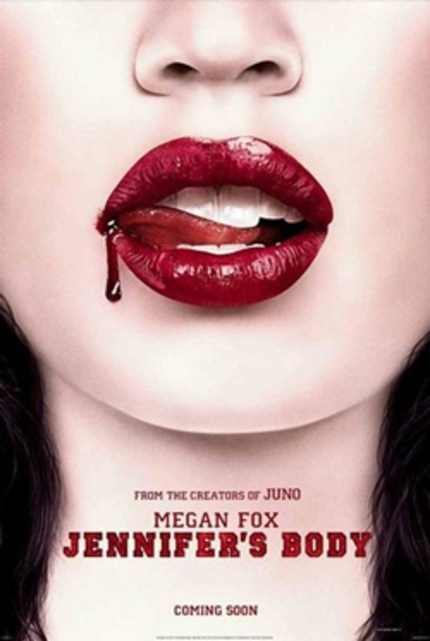 [This review originally appeared in one of my regular columns at Showcase.  Thanks to the powers that be there for allowing us to reprint here.]

On the Megan Fox front, Jennifer's Body contains no nudity, moderate cleavage, and one lesbian make-out sequence.  On the horror front the film contains a paltry four kills, all of which occur resolutely off-screen, the closest we get to actual carnage being silhouette shots and a few quick glimpses of the aftermath.  Those hoping for a full blooded horror film will leave disappointed. That said, Jennifer's Body is also a much sharper than normal stab at PG-13 horror comedy and a film that will, no doubt, play strong to its intended audience.

Megan Fox is the titular Jennifer, a blessed-with-looks-and-charisma high school girl who has all the boys falling down over her and knows exactly hopw to leverage that to her best advantage.  Amanda Seyfried's Needy, on the other hand, couldn't be any more different despite her close and long standing friendship.  By high school standards, Needy has none of the qualities that make Jennifer stand out - none of the stunning looks, though she's certainly not ugly, none of the natural charisma.  She'll never captain the cheerleading squad, never be the girl all the boys are talking about.  Though Needy is obviously a much smarter, much deeper person than Jennifer will ever be, on a social level she is ... well ... needy.  And so she follows happily where Jennifer leads, which one fateful night leads them to a local bar to see an up and coming band play, a band that attempts to sacrifice Jennifer to Satan in exchange for success but instead end up creating a flesh-hungry monster.

Love her or hate her, it should be said right off the top that Megan Fox was an inspired choice to play the embodiment of vapid self-absorption.  She slips into the role of Jennifer as if she was born to it, regarding all those around her as somehow lesser beings, clearly keeping Needy around only because she makes Jennifer herself look even better by contrast while - even before her demonic transformation - treating boys as little more than meat and window dressing, puppets easily manipulated to get what she wants from them.

And this is entirely the point.  Jennifer's Body is driven not so much by the urge to thrill, chill or entertain - though it does all of these things to varying effects - but by the core reality that Jennifer really doesn't change after turning demon.  She's just the same as she always was, only hungrier.  The entire film plays as a sort of subversive screed against the popular set, a theme that is quite simple and stretched a wee bit farther than it can really handle hear but one that rings true enough as far as it goes.

This is, of course, the sophomore film written by Juno scribe Diablo Cody and the same self-aware dialogue that drove that film is in full effect here, though it plays differently - and I would say better - in this more satiric version of the teen experience than in that earlier, more straight faced effort.  Somewhat ironically given the pro-female emphasis people attach to both Cody and director Karyn Kusama the film actually does a better job with its male characters than its female ones.  While Jennifer never becomes more than an image, Kyle Gallner is very strong as emo-classmate Colin while Johnny Simmons steals absolutely every scene he is in as Needy's boyfriend Chip.  Keep an eye on Simmons: if he keeps making smart choices - he'll next be seen in Scott Pilgrim Versus The World - he's going to be absolutely huge.

Is Jennifer's Body a revelation?  No. Does it somehow confirm Diablo Cody's wildly overstated reputation as the new Christ of female screenwriters?  No.  But it is a pretty solid piece of work, and an entertaining night out.