TIFF 09: First Clip From Romero's SURVIVAL OF THE DEAD! 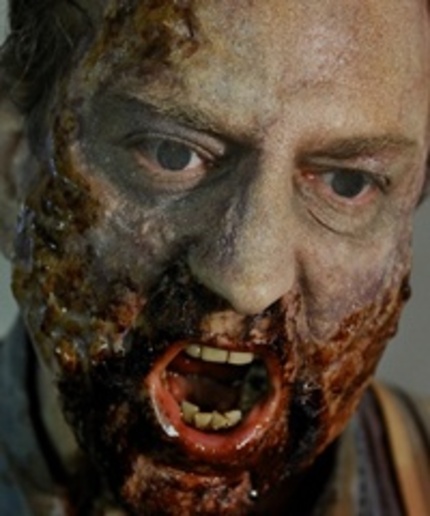 Does this really need explaining?  He created the genre that he continues to dominate and the latest film from George A Romero - Survival of the Dead - turns once again to his beloved undead creations.  Other than a quick leak of an unfinished sales reel a while back nobody has had the chance to see much of anything from Romero's latest, a situation that will soon change with the film's premiere at the Toronto International Film Festival and even earlier with this:  The first officially released footage from the film.  Here's how the festival describes it:

In a world where the dead rise to menace the living, rogue soldier Crocket (Alan Van Sprang) leads a band of military dropouts to refuge from the endless chaos. As they search for a place "where the shit won't get you," they meet banished patriarch Patrick O'Flynn (played with zeal by Kenneth Welsh), who promises a new Eden on the fishing and ranching outpost Plum Island. The men arrive, only to find themselves caught in an age-old battle between O'Flynn's family and rival clan the Muldoons. It turns out that Patrick was expelled from the isle for believing that the only good zombie is a dead zombie, while the Muldoons think it's wrong to dispatch afflicted loved ones, attempting to look after their undead kinfolk until a cure is found. But their bid for stability on the homestead has turned perverse: the undead are chained inside their homes, pretending to live normal lives - and the consequences are bloody. A desperate struggle for survival will determine whether the living and the dead can coexist.

Such apocalyptic themes have long haunted George A. Romero, much to the delight of his legions of fans. He now follows Crocket, a minor character from his last film, Diary of the Dead, to present a new doomsday scenario. In that film, Crocket made a brief appearance with his militia to appropriate the heroes' supplies at gunpoint. For Crocket's subsequent journey, Romero does something that most horror directors have neglected to do in recent years - he uses the genre to address societal issues. Romero here creates a world in which he can wrestle with the human condition while simultaneously finding new and creative ways to exterminate lurching flesh eaters.

Find the clip below!
Sign-In to Vote
Tweet 0 Submit

Do you feel this content is inappropriate or infringes upon your rights? Click here to report it, or see our DMCA policy.
George A. RomeroAlan Van SprangJoshua PeaceHardee T. LinehamDru ViergeverHorror

Mmm... Not overly thrilled by this clip. Hope the rest of the film won't be this silly. But I will still give the film a shot since it can't possibly be any worse than DOTD and I remain hopeful Romero has at least one last decent zombie pic.

It is a light hearted clip but I doubt it reflects the overall tone of the movie. I'm holding out hope for Survival. If Land can be looked at as suffering from too much studio meddling, and Diary as a stylistic experiment that wasn't successful, SOTD has the potential to be better as it's the first of the new trilogy made in Romero's traditional style.

I keep my fingers crossed but I truly hope Romero can tap into the independant stylings that placed him on the map. LOTD had the potential, but now we'll see how much or how little of a whipping boy the studio system should be.

Wow, that actually looks a lot more promising than his last two efforts which were more of either "made for TV" feeling or derivative of other films. THIS on the other hand looks like it will go back to Romero's strong point of infusing subtle humor to boost the horror and making deep social commentaries amongst the gore and hopefully can find that human condition without feeling too preachy.